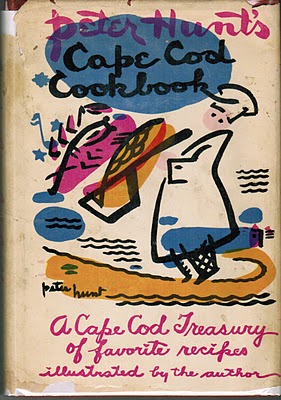 The first reason I picked up this cookbook in an antique store was the whimsical illustrations that caught my eye.  The book is filled with them, and so charming that you want to frame them all.  Even though I have had this book for a long time, it was just today that I decided to google the author and illustrator, Peter Hunt.  I found myself so fascinated with Peter Hunt that I ended up being glued to the chair for awhile.  How I love finding old cookbooks with stories!  It puts a smile on my face all day long and reiterates how much one can learn from cookbooks- and not just recipes.
Peter Hunt is a beloved piece of Americana.  He was a talented folk artist who made a name for himself with his peasant decorations from the 1930’s through the 1960’s.  Peter based his art work on his travels in rural France and American Pennsylvania Germans.  He drew images of flowers, hearts, fruits, and peasant people.  Peter was also known for embellishing stories.  One of the longstanding Cape Cod legends (that Peter originated and promoted)  is that he arrived in Provincetown in the early 1920’s when the yacht he shared with Scott and Zelda Fitzgerald was forced to take safe harbour during a storm.  Peter claims he left the boat and strolled the streets of Provincetown and declared he must stay there.  However he came to be in that location, it served him well.  Peter’s work was originally discovered by the well-to-do summer people on Cape Cod, who found his colorful peasant decorations the perfect accents for their cottages.  They also found him charming, witty, and a great addition to summer gatherings.  Soon buyers from Gimbel’s, Macy’s, and Bloomingdale’s heard of high society’s latest fascination in home decorating and heavily promoted Peter’s decorated furniture and art work. 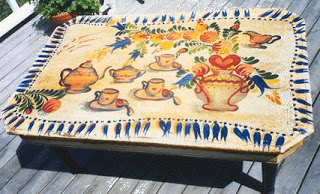 Peter also started recycling before recycling was cool.  He started finding discarded furniture and painted them with his charming decorations.  At the same time, his recycling capitalized on the World War II concept of conserving to support the war effort.  He eventually collaborated with E.I DuPont in promoting a line of their paints, and wrote several books on how to create his peasant designs.  However, after the war was over, when trade with Europe re-opened and new styles in furniture could be imported, Hunt’s style began to wane.  For many years, his items began to show up at garage and tag sales.  Unfortunately, as his money evaporated, so did his friends and the lifestyle to which he was accustomed.  He went to bed one night in 1967 and never woke up.  It is a shame he never knew the resurgence that would take place many years later.  Now Peter’s art work and furniture is commanding high prices at antique stores and auctions. 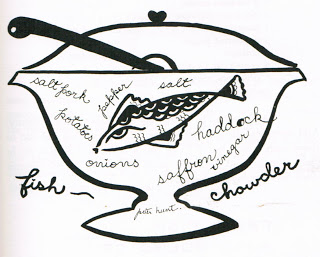 I’m not quite sure why Peter decided to write a cookbook, but it might be because he simply loved Cape Cod food and the cooking of his friends, who contributed the recipes.  He was not known to be a great cook, but loved to eat.  In the introduction of the book, Peter writes that fine cooking on Cape Cod can be divided into three parts- New England, Portuguese, and what might be called “sophisticated,” his favorite being Portuguese.  He even had a fantasy of owning a Portuguese restaurant that would be a weather-beaten place at the edge of the sea, with sand dunes around it.  It would have driftwood burning on foggy days, and the smell of the sea about it. There would be no fixed hours for meals at this inn, and a bowl of cabbage soup would be waiting when anyone came in from swimming or fishing.  The Portuguese recipes in the book include fish chowder, clam boil including the Portuguese sausage linquica, fried cod, and Portuguese Easter bread.  The traditional Cape Cod recipes include clam chowder, fried clams, clam fritters, oysters prepared every possible way,  lobster, Boston baked beans, New England boiled dinner, and cranberry and blueberry recipes. The “sophisticated” or “Off -Capers” cooking includes recipes for curries, cakes, lamb, and all kinds of fruitcakes.
When browsing this wonderful book, you can’t decide whether to look at the recipes or the art work.  Peter would probably be happy that you looked at both. 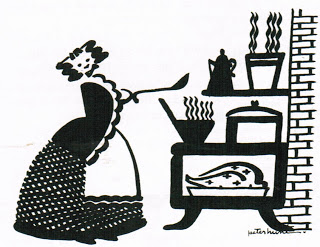 Only the Best for Cookie Monsters
A Chocolate Valentine Dessert