Time: 3:51 am, and the sun is just starting to peek through the curtain.  I had no idea the sun was going to rise so early.  I didn’t want to wake Kristina, so I quietly opened the balcony door.  What greeted me took my breath away.  I don’t know when I have seen anything so splendid.  It was a world of blues, purples, and mist.  The ship was passing through the Tracy Arm Fjord of Alaska’s Inland Passage, one of the most pristine environments seen on our voyage.  Tracy Arm is a 30-mile glacial ford that reaches deep into the Coast Mountains and deep into our glacial past.  It was a trip back in time to the Pleistocene ice age. I didn’t want to take my eyes off the majestic view, but I just had to grab my camera. 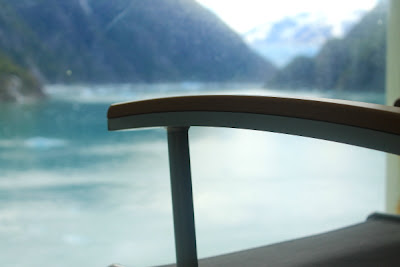 I wrapped up in a blanket and settled into the chair, never wanting this morning to end.  Even though it was so early, I didn’t feel the least bit tired.  I felt invigorated, with my mind wandering to every possible subject.  I thought about family, friends, the past, the future, and what I was going to do in the next stage of my life.  I had only been cancer-free for six weeks at this time, but felt like I could now live forever.  I thanked God for my second chance at life and pondered for another two hours.  I have never felt so peaceful. 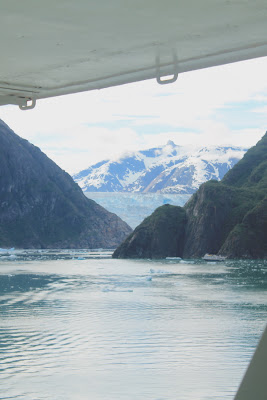 Look closely at the center of this photo.  The translucent-looking straight-lined object is an iceberg.   It looked like a mirror and not quite real. 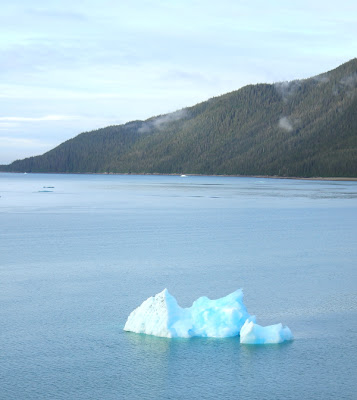 Little pieces of intensely blue icebergs began to show up.
Somewhere around 6:00 Kristina woke up and came out to join me on the balcony.  We sat there even longer, chatting, enjoying each other’s company, and making all kinds of plans for both of our futures.  It was a special time with my firstborn, and one that I will treasure always.
The boat was not due to reach Juneau until around 2:30, and we had a fun morning planned.  At 10:30, we were scheduled to take a sushi class with Chef John Suley.  I love sushi, but had never made it myself.  Sushi is one of those culinary activities I leave to the highly trained sushi chefs.  Sushi is an art. 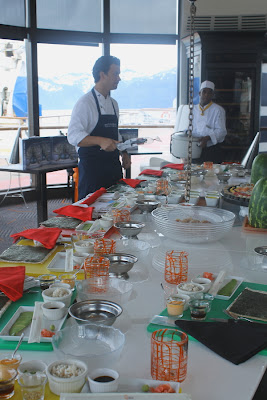 When we arrived, the chefs were setting up. 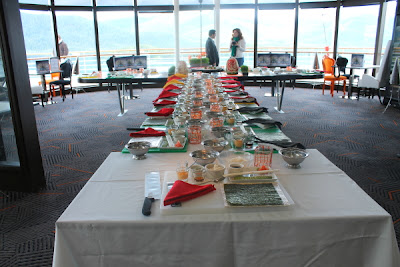 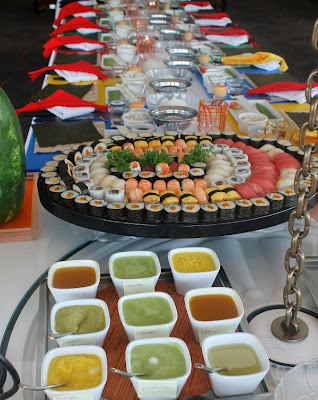 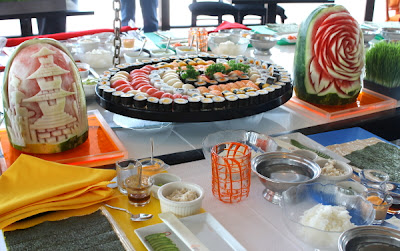 The table was stunning. 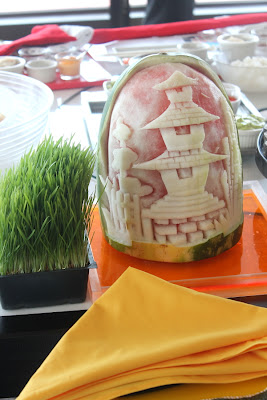 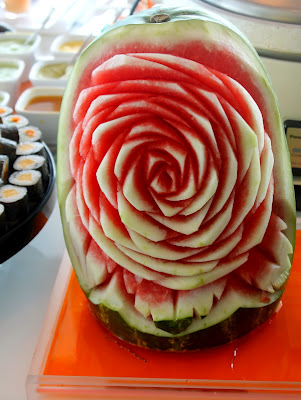 The event took place in one of the specialty restaurants, “Qsine.” 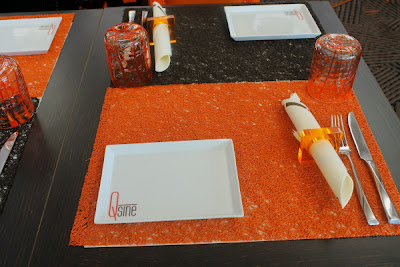 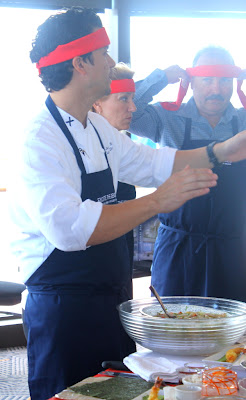 Chef Suley instructed everyone to put on aprons and bandanas. 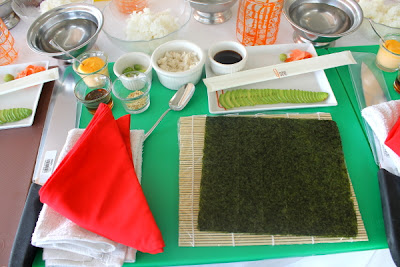 Each person had this work station. 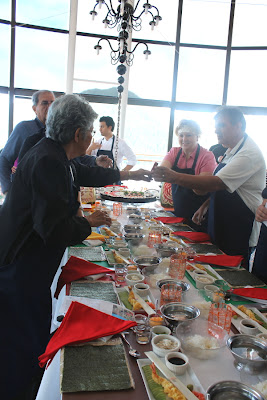 Then the fun begins! 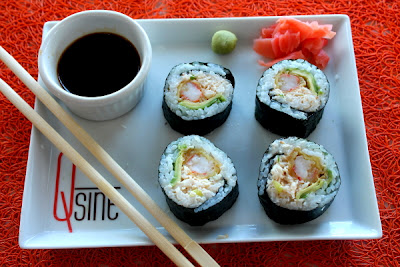 My completed crab-avocado sushi!
Kristina and I returned to our room to get ready for the Juneau arrival.  As we were dressing, Juneau suddenly came into view.  We were ready for another beautiful city. 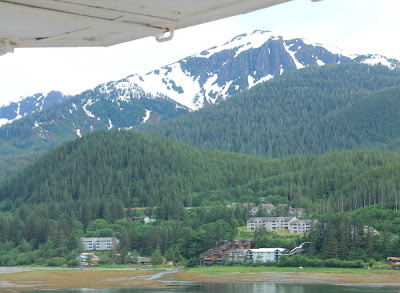 This time, we were not as close to the dock as we were in Ketchikan.  We had to board small boats to take us into town.  There were many shops in this section of Juneau, but they were all very touristy with the same souvenir stores.  As we were searching for something different, Kristina encountered a bear.  She survived. 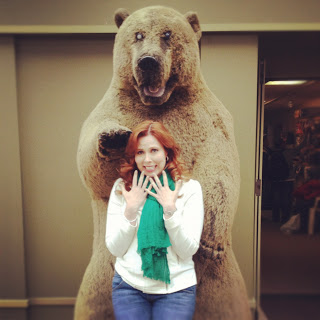 We finally came upon a bookstore.  If you ever want to find out anything about a town, find the local bookstore.  Bookstores and little cafes are the heartbeats of a city and the owners seem to always have an answer for any question.  We struck up a conversation with the owner and since we obviously found the bookstore, we asked about a good place to eat.  “Well,” he said, “Not much around here.  Everyone cooks at home.  Mostly seafood.”  Great comment on the residents; not so good for the area where we were.  And we were hungry.  But before we left in search of a place to eat, we found a couple cookbooks, some cookie cutters, and some cupcake baking containers that we couldn’t believe-  totem poles!  They were silicon and came three to a pack in different colors.  We bought both and stacked them up.  Too cute.  We wondered if they could only be found in Alaska. 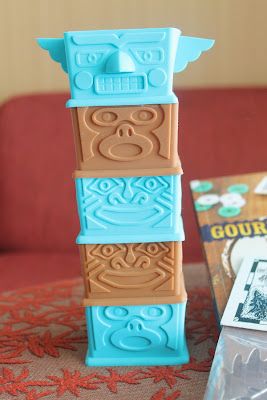 After checking out we were on our mission to find a place to eat.  There was one place, but it was packed and looked touristy, not local.  We wandered around and finally spotted a sign – “A Deer and a Beer.”  If that doesn’t sound local, nothing does. 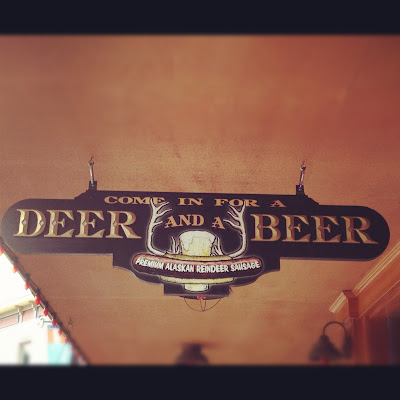 Since we wanted to report on everything culinary on this trip, we decided to check out the place.  The sign said in small letters, “Premium Alaskan Reindeer Sausage,” thinking that meant all their dishes were made with deer sausage.  Intrigued, we asked for the menu.  There is no menu, the girl behind the bar said.  We have one thing – deer sausage.  Still confused, we said, okay, we’ll take two, having no idea what to expect.
This was it. 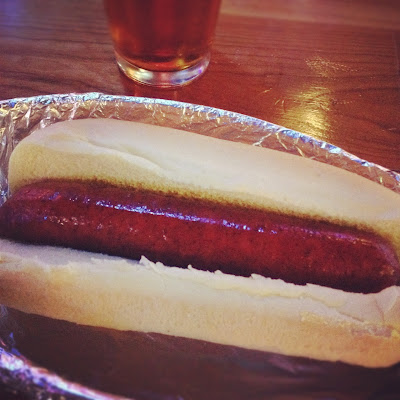 We took our hot dogs, I mean deer sausage, to a counter with tall chairs and beer mugs filled with peanuts.  The bartender brought over mustard and ketchup.  We took a bite and it was really good!  We started taking in our environment and decided we had picked the local hangout.  There were a few lumberjack-looking guys at the long bar.  Taxidermy was the decor of choice, with every kind of wild Alaskan animal represented.  Whoever owned the bar, also liked to collect out-of-state license plates because they were displayed everywhere, including this one on a totem pole that was right next to us. 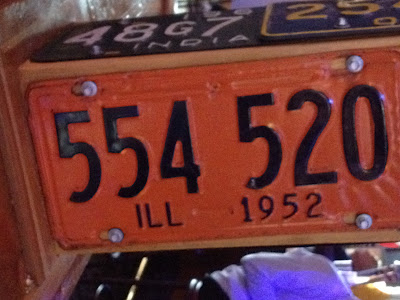 We couldn’t believe it.  The plate was from Illinois, where I was born,  and in the year of my birth, 1952.  Now we knew we were really in the right place…
But the fun wasn’t over yet.  We spotted a large wall with dollar bills all over it, with something written on each one using a large black marking pen.  We asked the bartender about it, and she said just write whatever you want on a dollar bill and I’ll hang it up for you.  By this time, Kristina and I were still having giggle fits about our bar experience.  She texted her sister along with a photo of me, and said – “Look!  Mom is in a BAR in Alaska eating a deer!” They found this highly amusing and laughed about it while I was trying to write something on the dollar bill.  I thought it would be appropriate to write “The Culinary Cellar in Alaska!!” across the front in the big bold letters.  However, since I was not paying attention, and my girls were laughing at me, I spelled it wrong.  I wrote the culinary CELLER instead of CELLAR.  Don’t think I’m not still being teased about that one.   Sigh.  I’ll never hear the end of it.  I finally got it right and our bartender hung it up.  So if you are ever in Juneau, get a deer and a beer, and find my Culinary Cellar dollar hanging up next to the mountain lion wearing a Viking hat. 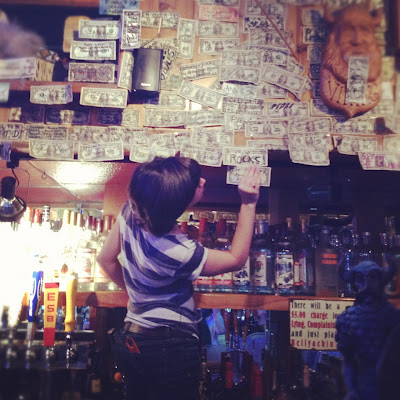 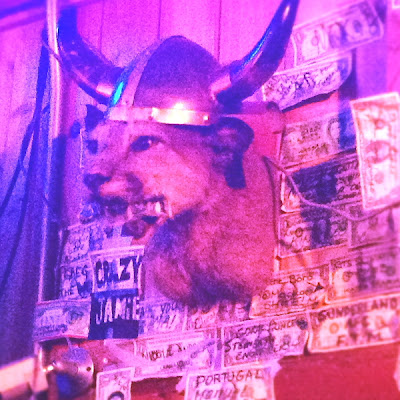 Kristina and I returned to the ship, enjoyed a wonderful dinner, and returned to the room to relax and look again at what we bought in Juneau.  Besides the totem poles, I bought another sourdough cookbook for my brother Paul, mini cookie cutters with Alaska shapes like a bear, moose, tree, etc., a cruise ship cookie cutter, another in the shape of Alaska, and a cookbook I had never seen before, about gourmet goodies to serve while playing board games and other things to do if you live somewhere that’s always cold and you can’t go outside. 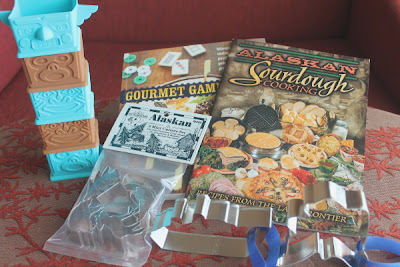 Tomorrow would be the town of Skagway, and a dinner that we had been looking forward to all week.  Wait until you see those photos!
The sun set at 10:05 and would awake us again before 4:00 am.  The boat will dock at 7:00 am which means we have to get up and find one of those little cafes for breakfast. 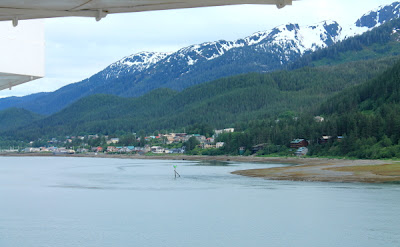 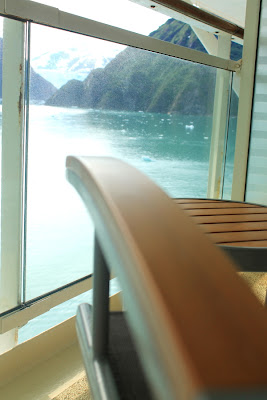