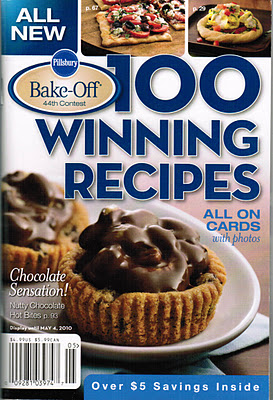 Sue Compton was the first New Jersey resident in history to win the Pillsbury Bake-Off.  Not only that, she had never entered a recipe contest before, and entered the contest one week before the deadline, with the encouragement of her mom and son, Jon.  And listen how she decided which products to use-  Sue took a spin around her local grocery store, filled her cart with the eligible products required for an entry, spread them out on her kitchen table at home, and grouped them according to compatible flavors and experimenting over a weekend- and voila!  The million dollar “Mini Ice Cream Cookie Cups” were born. 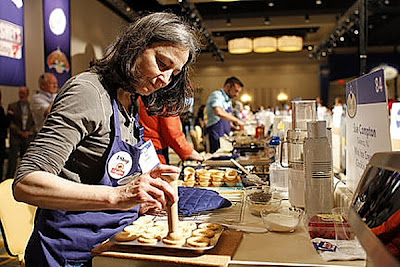 Pillsbury’s refrigerated sugar cookies are baked in mini muffin pans, the rims are coated in melted chocolate and dipped in nuts, raspberry jam is spooned into the cups, filled with ice cream, and frozen, then topped with fresh raspberries before serving.  Not only do they taste wonderful, they are so darn cute!  And who doesn’t like cookies and ice cream? 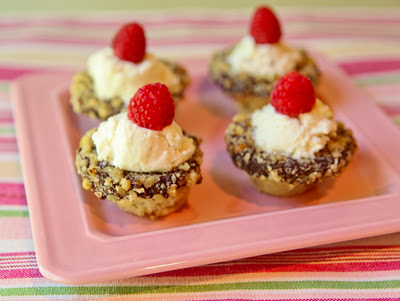 For this contest, the category winners were named at the contest, but not the million dollar winner.  Instead, they were flown to Chicago to appear on Oprah, who announced the winner herself live on the show. 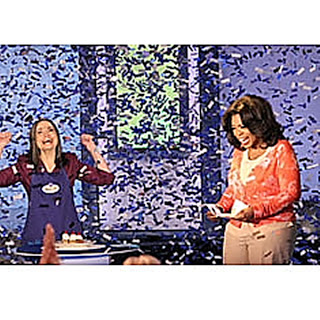 When Oprah asked Sue the obvious question, “What are you going to do with the money?” Sue replied, still numb from the win, “I have some frayed towels in our bathroom at home.  I think I’ll buy new ones.”  When asked if she was nervous during the taping of the show, Sue replied, “Well, I was nervous.  But it would have been worse if my son had not been with me.”
Here is a video of my daughter Kristina’s coverage of the contest and Sue’s win:
This Bake-Off was filled with so many memories from the contestants, and I received the most wonderful stories from many of them.  So many, in fact, that this blog will have to continue to tomorrow for Part II.
First up is from my dear friend of many years, Mary Louise Lever, a fabulous and gracious Southern cook:
List, lists – I make lists for everything! It is always a great satisfaction to be able to check off my completed lists. Five National Cook-Off Contests have been on my “bucket list” since I began entering the magic world of recipe contesting some 25 years ago. At the top of the list was the Pillsbury Bake-Off which, unlike the other 4 contests, remained unchecked.

Then, in early August 2009, a phone call from Pillsbury changed my bucket list – CHECK – a trip to the Bake-Off was finally mine! My Bistro Style Onion and Artichoke Galette was chosen for the Orlando 44th Bake-Off. Color me happy and over the rainbow plus the recipe uses my favorite Pillsbury product – the easy to use refrigerated pie crust!

The Pillsbury Bake-Off, The Queen of Cook-Off Contests, lived up to its wonderful reputation for being exciting, highly organized and worthy of the efforts one makes to be among of “the chosen.” Making new friends and seeing my friends Debbie and Kristina Vanni from my past cook-off experiences was equally thrilling. The Bake-Off was/is a memorable gathering of like-minded food-loving amateurs who enjoy the challenge of creating delicious foods and sharing their talents with the world. I had the pleasure of being there too. Onward and Upward to my new cook-off bucket list – Double Check!

Next with memories is from my sweet friend, Brett Youmans, who will also be competing in the next Bake-Off!  I can’t wait to see Brett again in a couple weeks.  Here are his words:
The first cooking contest I ever entered was the 43rd Pillsbury Bake-Off Contest. I was a lifelong fan and wanted to be a part of this little slice of Americana. I wasn’t selected that year, but I became more determined than ever to earn a spot in the next competition–rejection is a wonderful motivator! So, in the months ahead, I worked diligently on coming up with ideas and creating recipes for the 44th Bake-Off Contest. While I was hoping for a call on or about October 1st of that year, my call actually came months earlier. You see, for the first time in Bake-Off Contest history, the public would have a chance to choose 10 of the finalists and my recipe was one of 20 selected by the Bake-Off Contest team to compete for 1 of the 10 coveted spots. My recipe was posted online for a 2 week voting period and then I waited, and waited for the the call. Finally, my call came and I was confirmed as a finalist with my “Asian-Spiced Cashew-Chicken Piadinis.”

I didn’t take one second of this adventure for granted. It was a wonderful experience from beginning to end and I am now known in my community and at work as “the Bake-Off Contest guy!” It wasn’t my year to take home a prize but I was a winner in so many wonderful ways. One of the unexpected benefits of this wonderful contest are the friendships that I have made. Veterans and newbies alike, we all shared the same passion in that moment, on that day, and I am thrilled to remain dear friends with so many.

On the plane ride home, I tried to capture my memories:

Third up is from Cathy Wiechert  (in orange shirt, below) who writes a blog with the best name, ‘The Dutch Baker’s Daughter.” 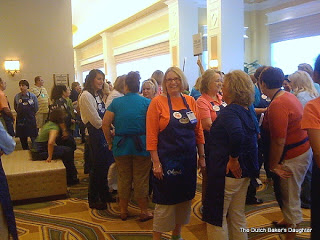 I was sitting in my cubicle at work when I got the call from Pillsbury that I was chosen as a finalist for the 2010 Pillsbury Bake-Off. Luckily, most people had gone home and couldn’t hear me hyperventilating as I digested this exciting news…I had been entering this contest for years! The recipe that finally earned me a spot at the Bake-Off was a waffle made out of cookie dough.

From the moment that I got that call, until my arrival in Orlando for the actual event, my life was a non-stop Pillsbury blur. There was paperwork to fill out, pictures to be taken, and media events to pursue. The best part was that I was able to connect with so many other finalists. My friends, family and co-workers were all so excited for me, but when they tired of hearing about it, I could chat with my new Bake-Off friends. We were all in it together, cheering each other on and soothing each other’s nerves. By the time we all met, it was like we had known each other for years.

The enormity of the event didn’t really dawn on me until I was standing in front of my range, waiting for the official start of the Bake-Off. There was a million dollars at stake! I was more than just a little dazed. My range neighbor to the left, Maurice, tried to break the tension by offering me a cinnamon chip, one of the ingredients in his cheesecake dessert, but before I could even bring it up to my mouth, one of the Pillsbury “helpers” swooped in. Apparently, it is a big no-no to move any ingredients from one station to the next. Yikes! This was serious business.

It didn’t take long for the tension to ease up. As soon as the official opening announcement was made, there was a flurry of activity as everyone got to cooking. I was happy that my range was in the far back corner of the room, as it seemed just a little less hectic. There were cameras, interviews, and visits from the Doughboy and from Sandra Lee, our official emcee. The time flew by, but I managed to get two batches of waffles in, one for judging and one for show. I did notice that my range neighbor to the right, Sue, was making some mighty cute little cookie cups that she filled with ice cream.

In the end, my waffles didn’t win a prize, but the experience of going to the Pillsbury Bake-Off made me feel like winner. Two years later, I still keep in touch with many of the people I met, including my range neighbor, Sue. It turns out that those cute little ice cream cookie cups were worth a million dollars!

Come back tomorrow for more stories and lots of photos from two more contestants!

To find the recipe for “Mini Ice Cream Cookie Cups” go to http://goo.gl/wmZix

Photos of “Mini Ice Cream Cookie Cups” are by my daughter, Kristina Vanni. Visit her blog at: http://www.betterrecipes.com/blogs/daily-dish