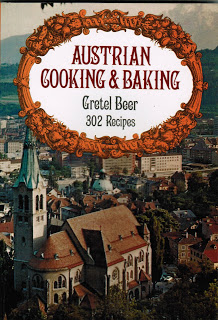 As long as I was stuck in the house during Chicago’s blizzard,  I decided to go on a cooking and baking binge.  I found this Austrian cookbook that I haven’t looked through in a long time.  I learned that Austrians love desserts and baking, so this was a good book to explore.  The culinary bouquet of Austria is made up of butter and rum; toasted almonds and chestnuts roasting on street corners;  mounds of yeast dough rising in deep bowls; and of course, the beloved Sachertorte.  Did you know that the Sachertorte was invented by Franz Sacher, a 16-year-old apprentice cook?! 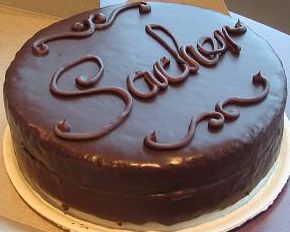 Austrians love to eat well.   After a great Wiener Schnitzel, they always have room for the Sachertorte, apple strudel, Dobos torte or Guglhupf.  Coffee is also very important to the Austrians and  having coffee is seen as a social activity.  Coffee, dessert, along with some comfortable gossip and a leisurely contemplation of life fares well in Austrian life.  Doesn’t that sound relaxing?  To imitate these comforting feelings around a house with 8 foot drifts was easy once I started brewing some coffee and looking through the recipes in this book.  I found some pages marked of baked goods I had made long ago.  I found my scribbles and comments on the recipes for various souffles and puddings.  I remember going through a phase of experimenting with souffles, so I must have used this book.  I found that in Austrian baking, there are many variations on the same item.  For example, there are many variations for the very popular  Linzertorte, which is actually a jam tart rather than a gateau, but that’s a whole other story.  There is Linzertorte Weiss (white Linzertorte) made either with blanched almonds or without almonds altogether; or Linzertorte Braun (brown Linzertorte) where almonds or nuts play a prominent part.  Then there is Linzertorte Geruehrt which means that butter is creamed before the dry ingredients are added rather than crumbling the butter into the dry ingredients.  And so it goes on.  There is even supposed to be a “real and genuine” Linzertorte originating in the town of Linz, but rumor has it that it is far inferior to today’s “copies.”

But in the end, after reading some instructions for strudels and puff pastries that were several pages long, I decided instead to open up my beat up old family recipe box and pull out my Grandmother’s cinnamon roll recipe.  I can just as easily brew up some coffee, contemplate life for awhile, and be just as happy surrounded by walls of snow.  It’s the baking, the aroma, and the feeling that counts.  I’m sure any Austrian would agree, as they also have a love for recipes passed down from generation to generation.