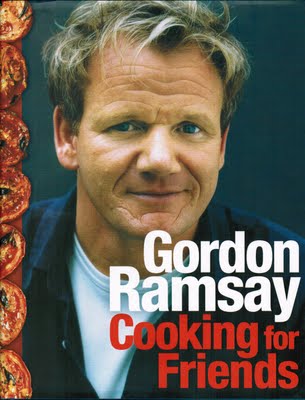 Gordon Ramsay has two shows with high ratings, “Hell’s Kitchen” and “Kitchen Nightmares.”  They are programs complete with screaming matches and a flood of tears, but that’s reality television.  It seems the bad boys get the high ratings, so maybe it’s all for show and chef Ramsay is actually a nice, calm person.  If anyone has the answer to that, I would love to know the truth.  In the meantime, when the screaming starts, I tend to exit the room and head to the kitchen.  I might even be heading there to make a chef Ramsay dish.  After all, he has earned many Michelin stars, has a food empire, and written best-selling cookbooks, so he must know his way around a recipe.  This cookbook has many good ideas for family gatherings or a relaxing evening with friends, with ideas for soups, salads, pasta, meats, fish, poultry, vegetables, and desserts.
I read that chef Ramsay grew up in Stratford-Upon-Avon, the land of Shakespeare. How does one grow up in such a serene environment and end up screaming expletives on world-wide television?  I have been to Stratford, walked through Shakespeare’s home, shopped in the delightful little shops, and strolled through Anne Hathaway’s garden where she and William spoke words of love.  The whole place makes you want to speak in iambic pentameter even when swearing.  Wouldn’t it be fun to hear the chef swear at his contestants in the language of Shakespeare?  Instead of calling someone a *%$#$% idiot, he could say, “Thou art as loathsome as a toad!” (Troilus and Cressida); or if a recipe was read incorrectly, he could scold with “Your brain is as dry as the remainder biscuit after voyage!” (As You Like It); or if some unfortunate soul dropped a dish, the chef could say, “You scullion! You rampallian! I’ll tickle your catastrophe!” (Henry IV, part 2).  But here’s my favorite from Henry IV, Part 1:  “You starvelling, you eel-skin, you dried neat’s tongue, you bull’s pizzle, you stock-fish–O for breath to utter what is like thee!- you tailor’s-yard, you sheath, you bow-case, you vile standing tuck!”  Whew!  That would take care of anyone!  (I’m afraid to ask what a bull’s pizzle is)… 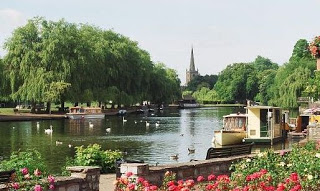 The serenity of Stratford-Upon-Avon

William Shakespeare’s home
In the end, Richard III said it best:  “Thou art unfit for any place but hell.”  Oh – so that’s where he got the title for the show.  I guess the chef was listening after all.

Cookbook Giveaway for the Week of 5-23-11
No Matter How You Say Tomato, It’s Perfect