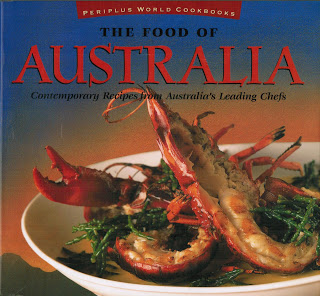 After recently watching Oprah take her entire audience to Australia, I felt the need to find my Australian cookbooks.  Aussie chef Curtis Stone had Oprah throw a “shrimp on the barbie,” sometimes the first thing people think of when Australian food is mentioned, but according to my books, Australian cooking is more complex and exciting than grilling shrimp.   The development of Australian cuisine is as diverse as its people.  Australia has joined the ranks of some of the world’s best cuisine, thanks to its dazzling range of local ingredients, a multicultural society, and a new generation of creative chefs.  Today, Australian tastes are as cosmopolitan as its population.

Australian cuisine emphasizes freshness and shows great creatively in blending cuisines along with its relaxed friendliness.  For food lovers, the greatest blessing is a range of climates, from alpine to tropical.  Add rich soil, pure waters, an abundance of sunshine, and the result is an endless feast of the senses.  Nowhere is this abundance more apparent than with Australian seafood, from coral trout to giant deep-sea crabs.  If you go into the Territory, people are partial to kangaroo and crocodile.  Across the southeast Australian heartland there is a whole range of citrus like limes and mandarins.  In the southern area, olive groves yield oils as distinctive as those of Italy and Spain.  And don’t forget Australian lamb – it is like no other.  The cookbook presents a cross section of recipes from 22 of Australia’s leading chefs presenting you with the “cuisine of the Southern sun.” The diverse recipes include Thai-influenced appetizers like oysters with lime and lemongrass dressing, or Italian-influenced but distinctly Australian,  like pumpkin risotto with smoked kangaroo.

For a unique perspective on Aussie cuisine, the land, and its people, click on this link to watch a video of my daughters as they enjoyed everything from kangaroo to dining at one of Australia’s finest restaurants. 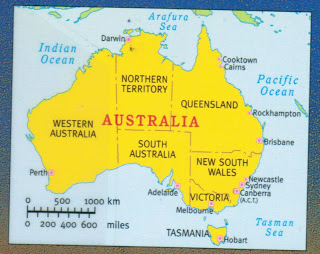 The Food of Australia