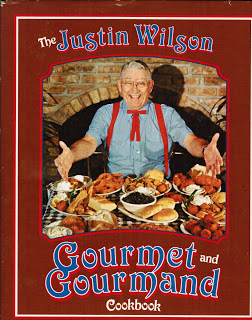 Justin Wilson and his syndicated television series still makes people smile.  It is long gone from the airwaves, but everyone who watched remembers his unique Cajun culture and food of South Louisiana.  The cookbook is filled with authentic Cajun recipes with sprinklings of Justin’s distinctive humor.  Recipes include “Cajunized” Mexican cornbread, a turnip casserole with shrimp, chili with crawfish, hot crab dip, quail in peach brandy sauce, barbecued oysters,  a variety of jambalayas and gumbos, and if you dare, alligator tail in a smoke cooker. 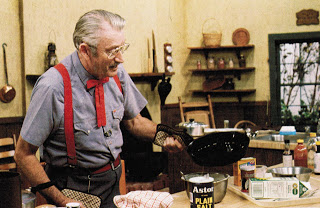 This is how we remember Justin Wilson, with his signature red suspenders and tie.  He looks like a Southern colonel whose eyebrows dance when he talks.  He was an original who entertained with his cooking, and especially his stories.  Justin was recognized as an ambassador for Cajun culture, and in addition to his cookbooks, he recorded more than a dozen albums of his unique humor.

Since tomorrow is Mardi Gras, it only makes sense to give away a cookbook by a Louisiana author.  You can have this little gem!  All you have to do is enter the random drawing.  Send your name and email address to [email protected]  by midnight this Friday, March 11th.  I will email the winner over the weekend.  You will love having this book in your library – Justin would say, “I garontee!”
(And a big congratulations to Michelle G. from Minnesota who won last week’s drawing for the Southwestern cooking cookbooks!)

7 Responses to Justin Wilson: Louisiana Humorist and Chef (and this week’s cookbook giveaway!)