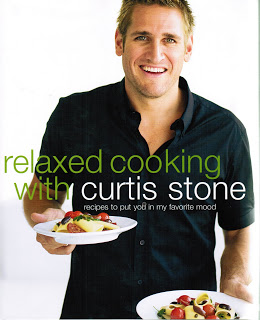 Most of the time my cookbook blogs are about out-of-print or older cookbooks, but I couldn’t resist writing about the newest book from Curtis Stone.  I have loved Curtis’s recipes ever since he was on the TLC network show, “Take Home Chef.”  The show no longer airs, but Curtis is still a busy guy.  He was just on The Celebrity Apprentice, makes appearances on The Biggest Loser, and is a regular on the Today show.  Curtis has worked as head chef in several Michelin-starred London restaurants, but his recipes are not complicated in the least.  His approach to cooking is laid-back, comfortable, and down-to-earth.  Curtis doesn’t have hard-to-find ingredients, and instead picks what is in season and easy to find at your local grocery store.

I have made several recipes from the book including a peach and mint iced tea, Lozza’s (Curtis’s mom) corn and bacon muffins, a barbecue bourbon sauce perfect for summer grilling, fresh linguine with garlic shrimp and pesto, and some delectable peanut butter cookies with chocolate chunks.  Not only can this Aussie cook, but he was voted one of People magazine’s sexiest men alive.  I learned all these things first-hand from my daughter, Kristina, who actually had a dinner at his home for some of the media in Los Angeles.  It was a fun-filled night, with great food and her personal interview with Curtis.  For more information on Curtis, visit http://www.curtisstone.com/

My friend Kim and the little Finnish Cookbook
Hog Wild! And How my Daughter Became a "Pork Personality"