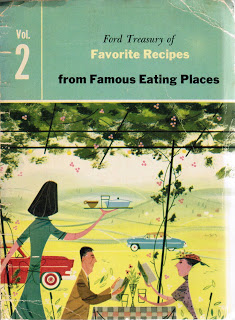 Did you ever watch “Road Tasted” on the Food Network with Jamie and Bobby Deen?  Or now watch “Road Tasted with The Neeley’s?”  Well, I just found what is possibly the first “road-tasted” cookbook,  formerly owned by Muriel of Chicago, who could have been an original “hostess” on the road.  The Ford Treasury of Favorite Recipes from Famous Eating Places is indeed a treasure.  It is a series of books published in the early 50’s from the Ford Motor Company.  I have been lucky enough to find several of these little treasures over the years, but was thrilled to find this one with detailed notes from Muriel, who wrote her name and address in the front of the book, and obviously used it over and over in her travels, as it is just about falling apart.  The Ford Motor Company printed the cookbooks with “the hope that it may be useful to travelers who know from experience that exciting food in an unusual atmosphere is often the highlight of an interesting motor trip.”  With so many American families headed out on their own road trips this summer, I thought it would be fun to visit some of the restaurants Muriel found from these cookbooks. 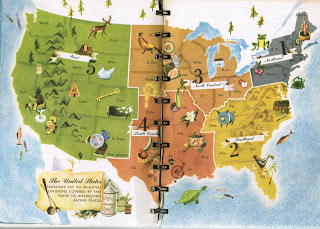 This is the map at the front of the book which has little drawings over the states, such as wheat in Kansas, pork in Iowa, lobster in Maine, and apples in Ohio.  The restaurants are listed along with a recipe, and divided into areas of the Northeast, Southeast, North Central, South Central, and West.   I checked out some of the places Muriel marked in the book from California.  It was fun to see some of the places I still go to in San Francisco, like Fisherman’s Grotto.  There is also the Round House right by the Golden Gate Bridge.  It is no longer a restaurant, but a tourist gift center.  It was designed in 1938 and was referred to as a restaurant for passing motorists, one of which was Muriel.  Another one Muriel noted was Omar Khayyam’s.  The restaurant is long gone, but there is a 1944 cookbook from this famous establishment that I would love to find!  Muriel also noted the famous Sportman’s Lodge in Los Angeles.  It was described as “a geographic crossroads for travelers, and when people were starting to take road trips, it was an oasis at the end of the road.” The restaurant is still in operation, because my daughter Kristina said she attended a friend’s birthday celebration there about a year ago.  It has an interesting history of being the hangout of many old Hollywood stars such as Clark Gable, Humphrey Bogart, Bette Davis, and John Wayne.  The attached Sportman’s Lodge Hotel also has the unfortunate distinction of being the place where Robert Kennedy stayed the night before his assassination. 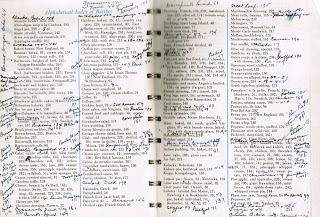 I know it’s hard to view, but this is the index of the cookbook.  Look at all the notes Muriel took about which place to find, or which recipe to try from a particular restaurant.  I am sure the people at Ford would be pleased to know how well-used this cookbook was to one particular Muriel from Chicago.  I like to imagine Muriel traveling around the country, tasting wonderful food from every region.  I wonder if she was with a husband or other family members, or even what kind of car she drove.  Maybe a Ford?  And since she kept such detailed notes on where to go and what to eat, can you even imagine the pictures she must have taken?  I would love to see the recipe box and cookbook collection of the unknown Muriel.  It would be safe to say that she was probably very adventurous, and by her careful notes, very organized.  I become very attached to my cookbooks with such personalization, and I even googled Muriel’s full name, address, and anything else I could find.  Since the book is old, I thought I might even find an obituary – but nothing came up.  I will just think of Muriel has the original “Road Tasted” hostess.  It sounds like she would have loved that job.