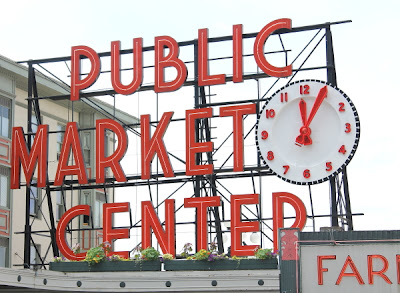 Kristina and I woke up completely refreshed from our second day in Seattle, mostly because the beds at the Four Seasons are incredibly comfortable.  We knew what excitement was ahead for us, including the thought that the market was only a few steps away from the hotel.  But before we put on our walking shoes and headed for the market, we met Kristina’s high school friend, Carrie, and her darling new baby boy, at Art, in the hotel, for breakfast.   This was called “The Market TV Tray,” with fresh fruit, homemade Greek yogurt with cereal and berries, a fruit smoothie, and eggs over easy on whole wheat. 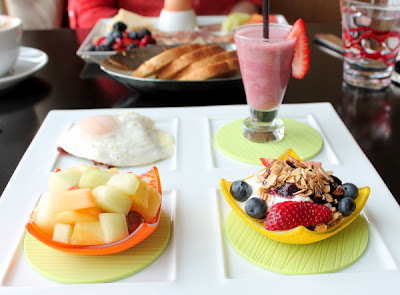 After saying our good-byes to Carrie and kissing the baby, we were off to Pike Place! 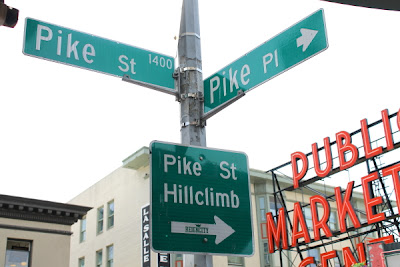 Where to begin?? There is so much to see and taste.  We walked up a little hill and our first view was of the police officers on horseback.  They are probably chatting about what to have for breakfast. 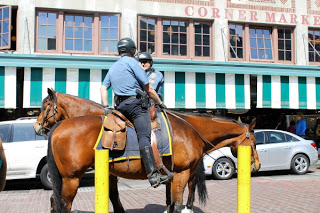 We first headed inside to see what the vendors offered for the day.  As we entered, the fragrance of flowers hit us in the face even before the fish.  The peonies were gorgeous! 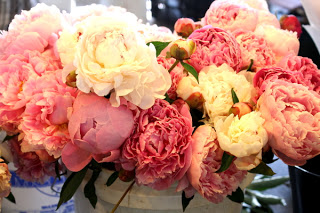 The fragrance of doughnuts started permeating the air, so we knew we had found the stand our friend Brett told us was his favorite.  The line was a mile long, so we headed into the heart of the building. 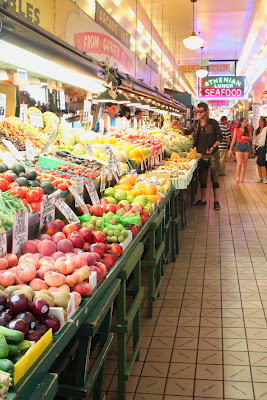 This view is from every direction from what seemed like miles of the most beautiful produce you can find anywhere.  You want to grab everything and start cooking! 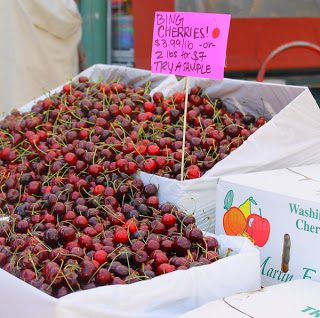 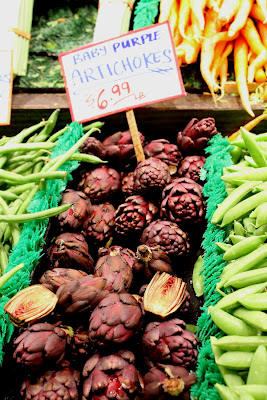 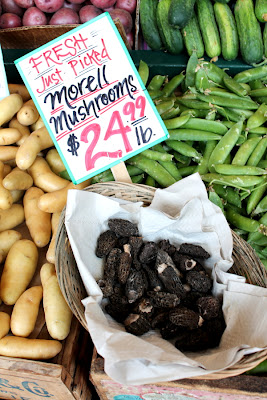 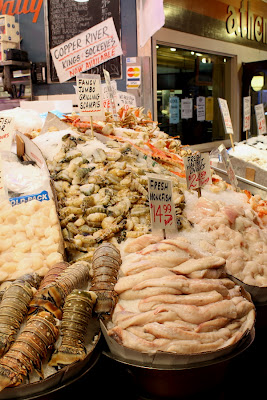 As you can imagine, the seafood was incredible! 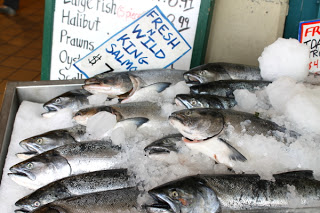 Cookbook author of Herbivoracious and Seattle resident Michael Natkin suggested we find “Market Spice,” one of his favorite spots. All we had to do was follow our noses.  The fragrance is intoxicating before you even enter the store.  I bought the 100th Anniversary Cookbook from Market Spice called For Spicesake, which  I will talk about it on a future blog.  We also bought some teas and, of course, spices.
Always on the lookout for kitchen/cookbook stores, we found “Kitchen Basics,” a small, yet packed store, full of things we love to find plus a few surprises.  I bought some cute canning labels, a Bert Greene cookbook compiled after his death called Bert Greene’s Kitchen: A Book of Memories and Recipes.”  Since I am a huge Bert fan, I grabbed it immediately.  I rarely find anything in a kitchen store that my husband would like, but Kristina found something that was literally hanging from the ceiling at the checkout counter.  It’s a berry picker, and since he loves to gather wild blueberries in the Upper Peninsula of Michigan, I had to buy it for him.  It’s basically a big plastic shoe box-sized contraption with a big comb/scooper on top.  Instead of picking the berries one by one, you can gather a bunch in one fell swoop.  He loved it, and can’t wait to try it later this summer. 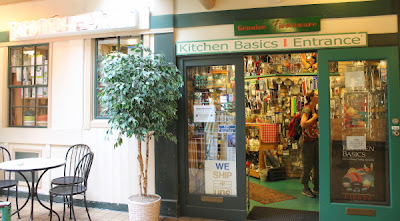 One last stop was at a huge case holding every kind of fresh egg you can imagine.  Ostrich or emu eggs, anyone? 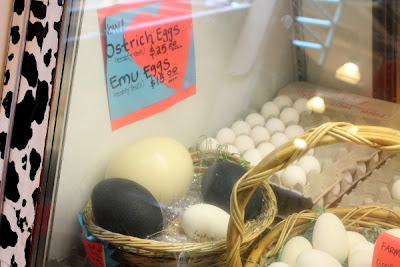 Heading outside, we found Beecher’s cheese, famous for its rich and creamy macaroni and cheese.  Oprah featured it on one her “favorite things” shows.  It’s very small and was extremely crowded, so we were not able to taste it. 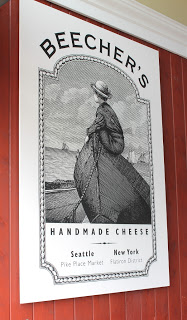 Another place not to miss is the original Starbucks! 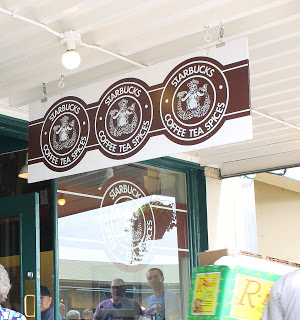 One popular place with more long lines was the piroshky store.  We wanted to try one, but instead watched them being made in the front window, with all kinds of different fillings.  I can’t even remember them all, but they looked and smelled wonderful.

We walked around for hours, taking it all in and enjoying every second.  The tents stretched on forever.  Not all items were food; there were crafts and other items from local artists. 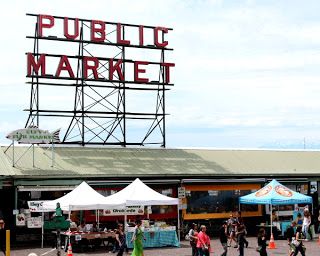 We could have shopped all night long, but we had to get packed and ready to go for our Alaskan cruise the next day.  We met briefly with one of my husband’s cousins and had a nice visit with them.  But now the packing begins and we had to head back to the Four Seasons, which quickly began to feel like a comfortable home.
Over twenty-five years ago, I made a new friend named Kim at a cooking contest sponsored by Kraft, called the “Hall of Fame” contest, featuring recipes using Philadelphia Cream Cheese.  There were four finalists and we were all flown to San Francisco for a week of food and fun.  My husband Bill and I became instant friends with Kim and her husband, Ursus.  They live in Seattle, so of course we couldn’t wait to meet again after all these years.  We have kept in touch ever since the contest with letters, emails, and family photos of our children.  The next morning we met for breakfast at the hotel.  It was like we hadn’t been apart for more than two decades.  Kim is still beautiful with gorgeous curly hair, the best smile in the world, and a huge, loving heart.  She offered to drive us (and all our luggage!) to the ship.  Two of Kim’s charming, sweet daughters came along, too.  We had a great visit, and Kim even offered to pick us up upon our return and drive us to the airport.  Since our visit was so short, and I wanted to see Kim again, we said yes.  More on our return after the cruise blogs!
We had to say good-bye to the magnificent Four Seasons, the amazing Chef Jelle, and the friendly staff.  As we stepped outside, a car pulled up with a license plate that caught our eye.  I’m sure the driver wondered why we were taking a photo of her car!
Yes, Seattle is definitely a foodie town, and we were going to miss it. 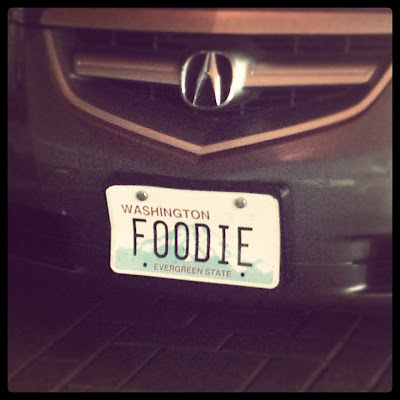 Kim drove us to the port where the “Celebrity Infinity” was docked.  It was rather chaotic with hundreds of people checking in at once.  It was our first cruise experience and we didn’t know quite what to expect.  As we were being surrounded by more and more people, all their luggage, screaming children, and the huge ship looming over us, Kristina and I suddenly felt overwhelmed.  But the feeling soon passed and we finally made it to our room.  We were so fortunate to have our own little balcony.  We looked out at the city and already missed it.   The boat started to move, and we were on our way to Alaska.
Next week, I will have (hopefully!) daily blogs (or at least every other day!) on the day-to-day events of the cruise-  and there is so much to say about our amazing week in paradise.
Good-bye, Seattle!!  We will miss you.  Alaska – here we come!! 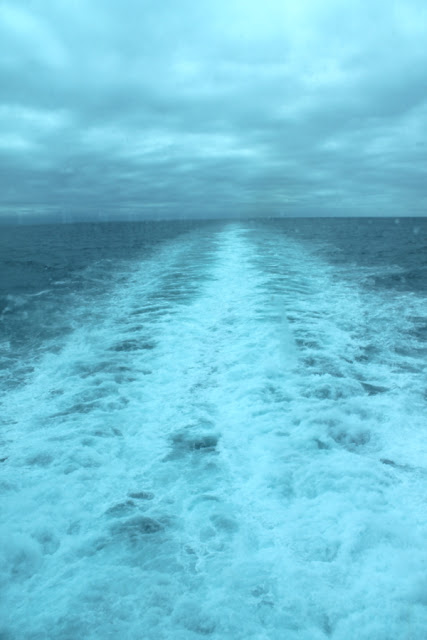 Seattle Day One: The Four Seasons
Alaska Day One: Feeling Like a Celebrity (Cruise, that is!)