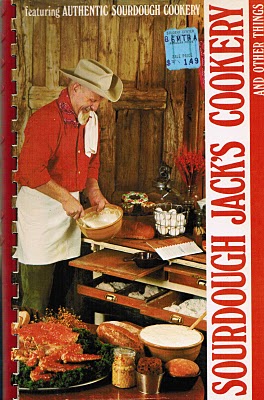 Yes, I know it says “Sourdough Jack,” but my brother Paul has always been the sourdough in our family.  Paul is a retired firefighter and paramedic, so of course cooked for his fellow firefighters.  Paul loves this book.  In fact, he carries his with him when he travels back to the states from his home in Tonga, which means it is also very beat up and almost falling apart.  It’s one of those well-loved cookbooks that you know has made many people happy to taste its treasured recipes.
“Sourdough Jack” is Jack Mabee.  This cookbook was originally published in 1959; this is the 1970 version.  When it was first printed, it was just about the only cookbook on the subject of the old-fashioned art of sourdough cookery.  Jack spent many years traveling around the American West, especially Alaska, where he was given a sourdough pot by an old-timer.  The definition of sourdough was “A Canadian or Alaskan prospector, so called from the habit of carrying sourdough, a fermented dough used as a leaven in making bread.”  But sourdough goes back even further, some 6,000 years to the Egyptians, and was for countless centuries the only method man had of leavening all manner of breadstuffs.
Jack wanted to bring an easy and modern method of making sourdough to the masses.  After two years of experimentation, Jack developed a dehydrated sourdough starter, and it was put on the market as an authentic mailing souvenir of Alaska.  All one had to do to make the sourdough was to use a packet of Jack’s starter mixed with 3/4 cup of flour and 1/2 cup warm water.  The mixture is then placed in a covered jar, left in a warm spot for 48 hours to ferment, then refrigerated.  Whenever you want to put the sourdough to work to make bread, pancakes, biscuits, or a variety of other recipes in his book, then you must start the night before.  Add 2 cups of warm water per cup of starter in a large mixing bowl.  Blend in 2-1/2 cups of flour.  Cover and leave at room temperature for at least 12 hours.  Before adding other ingredients to make a recipe, put one cup of this mixture into your sourdough jar or pot and place back in the refrigerator: this is your basic sourdough sponge.  Every time you use your sponge, save a cup from each batch in the same way, making this your “perpetual starter.”  It keeps in the refrigerator indefinitely.  And it really is indefinitely.  There are some San Francisco bakeries whose starter is over 100 years old!  I remember when a sourdough bread bakery opened in one of the Chicago suburbs, the “mother-starter” was brought across the country for their bread.
So it sounds pretty easy to make a starter, but I have yet to conquer it.  I keep doing something wrong, but not sure what it is.  I need Paul to come and get one started for me.  I can still remember the first time Paul made sourdough pancakes for me, even though he might not remember.  It was my 21st birthday, and I awoke to the aroma of something in the kitchen.  Before I was greeted with the amazing pancakes, Paul did something else.  He hand-crafted a beautiful leather handbag for my birthday gift, and it was hanging from a hook so I could see it as I walked into the kitchen.  After admiring his work, we devoured the pancakes, but that wasn’t the only work his sourdough sponge did that day; he also made a sourdough chocolate birthday cake, for which he is still famous- even on his little island in the South Pacific!  And that’s why he will always be our “Sourdough Paul.”