The Sugar Plum Tree and other Culinary Delights of Childhood 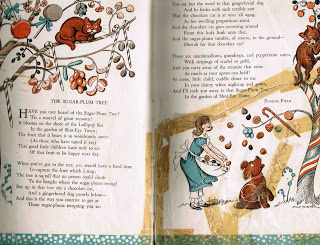 I don’t remember the first food I ever tasted, but I do remember all of the food in books my Grandmother and Mother read to me.  The Sugar Plum Tree by Eugene Field is probably the first one I recall.  Imagine a 2-year looking at this photo and seeing a little girl holding up an apron and have candy pouring from a tree! Wow!  As you can see, this page was well-loved and has old, yellowed scotch tape holding it together.  In fact, the whole book is falling apart.  It is called Poems of Early Childhood, one of a series of books from Childcraft.  Some of my most precious memories are sitting on my Grandma’s or Mom’s lap in our rocking chair, and having these poems read over and over again.  I learned all about Simple Simon and his pies; Peter who lived with his wife in a pumpkin shell; four and twenty blackbirds baked in a pie; hot cross buns; kings who ate potatoes with their jackets off (apparently only “commoners” ate them with the jackets on!); or the one about Grandma’s cupboard which held such delight as lollypops and banbury cakes.  I used to wish I could be the little child eating animal crackers with cocoa, and laugh at the Grandpa who dropped his glasses in a pot of purple dye and had to eat purple apple dumplings while drinking purple cider.  My first fascination with cooking came from a poem called Jane Small Ate it All.  There are pictures of various girls named Jane, baking cookies, stirring cookie batter, measuring flour, and beating eggs with a rotary beater.

Isn’t it amazing how something as simple as childhood poems can spark food and cooking interests at such a young age, which leads to having a toy kitchen, which leads to a love of cooking as an adult?  Books stir the imagination, but as you grow up, you want the material results.  I can make fudge or other candy, but it will never be as good as the sweets gathered in the little girl’s apron from the Sugar Plum tree.  I have yet to make a banbury cake, but I’m sure it’s delicious.  I hope never to eat a purple apple dumpling or live in a pumpkin, but I still like being one of the “Jane’s” mixing up something in the kitchen.

Memorial Day and a 1940’s recipe
Cooking with Herbs