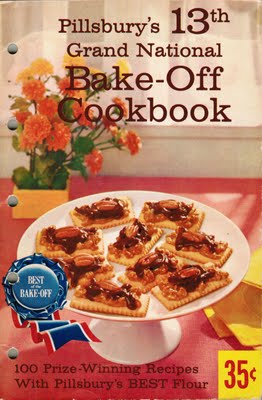 It was lucky 13 for Mrs. Vernon (Alice) Reese of Minneapolis, Minnesota.  Alice’s “Candy Bar Cookies” won the $25,000 Grand Prize at Pillsbury’s thirteenth contest.  Alice said she came up her winning cookie idea when she accompanied her husband on a business trip to California.  Besides cooking, Alice “sewed a fine seam” and is “handy at woodworking.” 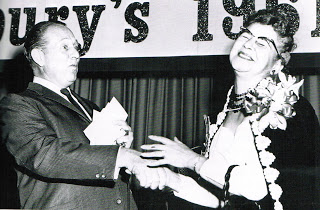 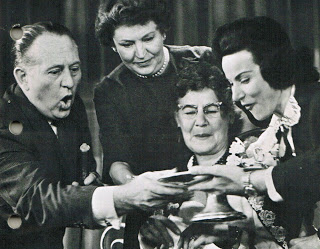 The Guest of Honor at this Bake-Off was Abigail Van Buren, better known as “Dear Abby,” seen on the right next to Alice, along with host Art Linkletter and Mrs. Phillip Pillsbury.  I wonder what advice Dear Abby handed out to the contestants?  Abby loved to cook herself, as she had booklets of recipes that readers could order for a small cost.  As an avid cook,  Abby probably had a wonderful time at this Bake-Off sampling all of the great winning recipes.
The base of Alice’s cookies are baked shortbread rectangles or squares.  The cooled cookies are then spread with a caramel filling, and topped with a shiny chocolate icing and a whole pecan on each.  Using a pastry wheel to cut the cookie dough adds interest and flair to the baked result.  These cookies are delicious and addictive.   I had to hide these from my husband until they were photographed! 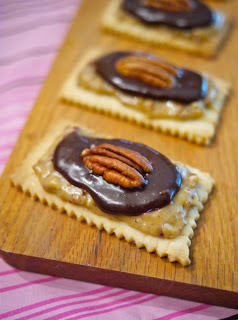 One of the other prizewinners had a very familiar recipe.  Senior division first prize winner, Mrs. Leonard Geisert of Lakewood, California entered “Black Bottom Cups,” which are now known as the popular blackbottom cupcakes that have been seen over and over at bake sales and parties since the Bake-Off.   There are so many recipes from the Bake-Off that have hit iconic status, it looks like it is yet another. 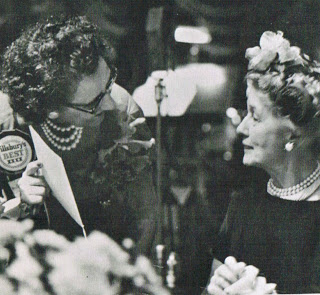 Another familiar celebrity face at this Bake-Off was fabled Hollywood gossip columnist Hedda Hopper, who was known for her elaborate hats and making some celebrities of the time shake in their boots when she entered a room.  Here she looks very demure as a Bake-Off contestant asks for her autograph.  I wondered why Hedda Hopper would attend a Bake-Off contest.  Certainly she didn’t want to gossip about contestants!  Turns out she was a good friend of host Art Linkletter, who knew that popular Hollywood gossip columnists were beginning to lose their clout due to television.  He wanted to provide a venue for Hedda to be seen and heard more often. Not only did he invite her to the Bake-Off to “be seen” but also invited her more than a dozen times to be a guest on his popular “House Party” television show dispensing her latest Hollywood gossip.  Hedda was actually on the show just days before she died.  Now the question is, what did the contestants gossip about Hedda?  Wouldn’t that have made a fun column!
Here are the other winners of  Bake-Off 13:
-Senior Best of Class winner “Lemon Lassies” by Mrs. Gertrude Anderson of Long Beach, California
-Junior Third Prize winner “Peanut Butter Fingers” by Sharon Nulsen of Cincinnati, Ohio
-Senior First Prize winner “Black Bottom Cups” by Mrs. Leonard Geisert of Lakewood, California
-Senior Third Prize winner “Spicy Butter Cake” by Kenneth Kerber of Rochester, New York
-Senior Best of Class winner “Anniversary Date Torte” by Mrs. William Ryken of Santa Cruz, California
-Second Grand Prize winner “Hawaiian Coffee Ring” by Mrs. Ray Oliver of Wellsville, Missouri
-Junior Second Prize winner “Swedish Tea Log” by Ardythe Dey of Fort Calhoun, Nebraska
-Senior Second Prize winner “Barbecue Twists” by Mrs. Daniel Staufenbiel of St. Louis, Missouri
-Junior First Prize winner “Apricot Crunch Pie” by Robin Bloms of Olympia, Washington
-Senior Best of Class winner “Potato Pan-Burger” by Mrs. Richard Philabaum of Phoenix, Arizona
-Senior Best of Class winner “Peach Carousel” by Mrs. W.V. Crawford of Crossville, Alabama
To read more about the Bake-Off contest go to: http://www.bakeoff.com/
To get the recipe for the grand-prize winning “Candy Bar Cookies” go to:
http://su.pr/28gZtU
To read my blogs from previous Bake-Off contests go to:

Bake-Off food photos are taken by my daughter, Kristina Vanni. To read her blog go to:
http://www.betterrecipes.com/blogs/daily-dish/

The Biggest Box of Giveaway Cookbooks Ever!!
Food as Art