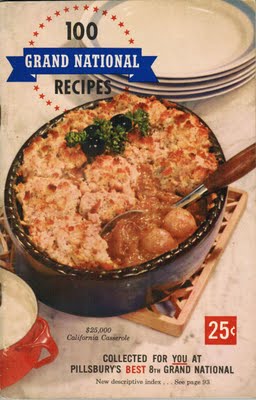 If you google “California Casserole,” you will find pages upon pages of recipes with this same name, but only one is the “original” California Casserole.  Mrs. Hildreth H. Hatheway of Santa Barbara, California won the 8th Grand National in 1956 with her casserole of veal, small whole onions, cream of chicken soup, topped with dumplings made with lots of dry seasonings and rolled in bread crumbs.  In the kitchens of the 1950’s casseroles were king.  Cookbooks, food company brochures, and popular women’s magazines confirm this to be true.  Canned soup reigned supreme as the ultimate ingredient to use because of its convenience and versatility.  Casseroles were everywhere and contained every ingredient- salmon, chicken, tuna (with potato chip topping), ham, ground beef, turkey, frozen and canned vegetables, rice, noodles, and the always present creamed soup.  Due to its widespread popularity, it was almost inevitable that a casserole would win the Bake-Off at some point in the ’50’s, and even did again in 1963.  Americans loved their casseroles and still do, although you may not find many people making one with two pounds of veal, as in this winning casserole.  Veal was much less expensive in the ’50’s than it is now.  When American farmers produced a surplus of corn in the mid-50’s, it became the primary feed for cattle.  They found that cattle fed a diet rich in corn got fatter much faster and could be sent to market much earlier than grass-fed cattle, and could be offered much cheaper to the consumer and was heavily marketed by grocery stores.  Now veal is considered more of a luxury item and very expensive. 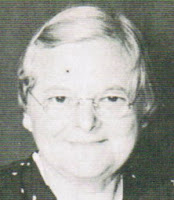 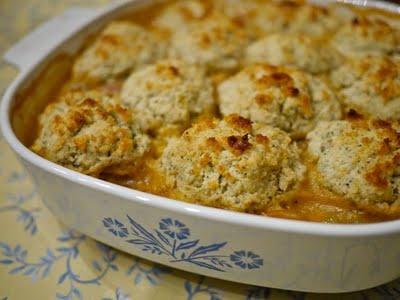 The winning “California Casserole”
This was Mrs. Hatheway’s eighth time to enter the Grand National contest.  Her husband was a government trapper, and they decided to use the prize money to buy a new home.  (I wonder if they bought something on the ocean in their hometown of Santa Barbara because now it could be worth millions!).
In many casserole recipes that have dumplings, the batter is mixed and just spooned on top.  In the winning recipe, the dumplings are made with flour and milk as usual, but spices such as poultry seasoning, celery seed, onion flakes, and poppy seeds are added.  After forming the dumplings, they are dipped in butter and rolled in bread crumbs before topping the casserole.  The popular creamed soup, in this case, Cream of Chicken, is not only in the casserole filling, but then a sauce is made with more Cream of Chicken soup mixed with sour cream.  A 1950’s dream casserole recipe.
This was the first Bake-Off to offer a “Brides” category.  The brides had to be between the ages of nineteen and thirty-one.  This category must not have been very popular because I didn’t find it past the 10th Bake-Off.   The first place Bride winner was for “Easy Cheesy Buns” a yeast bread which contained Velveeta, another popular ’50’s ingredient.  The second place Bride winner was for “Chicken a la Cheese Pie” which was basically a chicken casserole in a crust topped with American processed cheese slices. 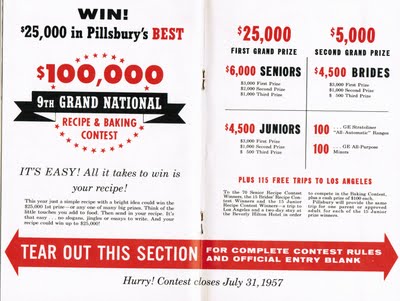