A Cooking Teacher Reveals Her Secrets 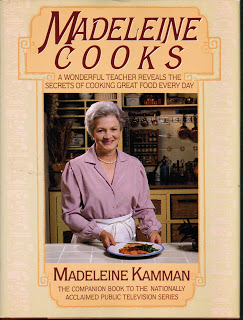 Many of you may remember the acclaimed PBS cooking show, Madeleine Cooks, which aired from 1984-1991.  This is the companion book to the series.  Madeleine was born in Paris and worked in her aunt’s two-star restaurant in the Loire Valley.  She later studied at Le Cordon Bleu and moved to America with her new husband in 1960.  Madeleine taught classic French cuisine and pastry techniques in Philadelphia, then opened her own cooking school, Modern Gourmet, in Massachusetts.  Her restaurant, Chez La Mere Madeleine, was considered by many, including the great Paul Bocuse, to be one of the finest in the country.

Even though she was trained in classic French cooking, Madeleine adapted American ingredients and melded them with the techniques of her homeland.  The first chapter is called “Chicken,” and Madeleine reveals her concern about getting used to American chickens.  Growing up in France, the chicken breast was not considered the prime part of the bird, so she was surprised to learn how much Americans loved the chicken breast.  She didn’t think the breast had any flavor and was easily overcooked and dry.  Madeleine wondered about chicken-farming in America and what they were fed, coming to realize that what she missed was the taste of grain-fed birds as they were in France.  She even considered raising her own chickens, but didn’t think roosters crowing at 5 am would endear her to the neighborhood.

Madeleine gradually became used to American chicken and even entered the “National Chicken Cooking Contest” in 1964.  Well, now she had my attention.  I, too, have been a contestant in this very same contest, twice, and I suddenly felt a camaraderie with this famous chef.  She said she loved the experience of competition and walked away not winning the contest, but with fifteen Sunbeam appliances, among them a vertical chicken roaster and an electric frying pan, which ended up being one of her favorite cooking discoveries.  About ten years later, she was asked to judge another chicken cooking contest.  During a panel discussion, she dared to stand up and ask her old concern about American chickens – why couldn’t the American chicken producers raise free-running birds?  Frank Perdue’s mouth visibly dropped, and a few women who raised chickens literally booed her!  Nowadays, Madeleine would be applauded.  She was well ahead of her time.

All of the recipes in the book are just marvelous, as are all of Madeleine Kamman’s cookbooks.  I will now always smile when I think of Madeleine causing Frank Perdue’s jaw to drop with her chicken question.  And I also will write a future blog on my two experiences at the National Chicken Contest.  It suddenly seems even more exciting after learning that Madeleine Kamman also loved the contest.  Cluck, cluck. 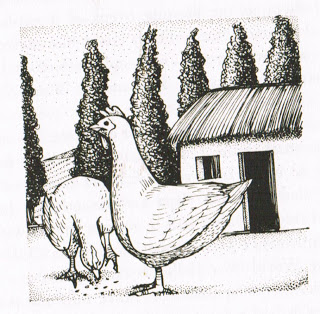 It’s Time for a Box of Cookbooks Giveaway!
The Year of the Rabbit

2 Responses to A Cooking Teacher Reveals Her Secrets