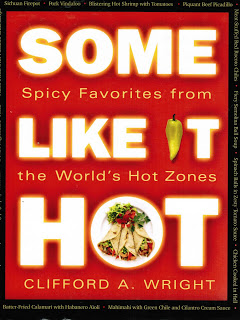 Ruth Wakefield might be more than a little surprised to see what Americans have done to her classic chocolate chip cookie.  I have seen chipotle powder, chili powder, fresh ginger, and all kinds of intense flavors in chocolate chip cookie recipes.  Our country’s cuisine has an ever-expanding palate, and much of the time, that means the more spice or intense flavor, the better.  Doritos are no longer just Doritos;  we now have Dorito flavors called First, Second, and Third Degree Burn!  Cheetos are hot and spicy, along with crackers, popcorn, and a plethora of other food items.  We seem to expect more from a flavor, and food companies are hitting their kitchen labs to appease our flavor-junkie habit.  Gums now have “micro-bursts” of flavor. Mayonnaise has wasabi.  In my pantry, I have flavored ketchups called ketchapeno and ketchipotle, both which I adore by the way, so I guess that makes me a flavor junkie, too.  The McCormick spice people say that Americans now keep an average of 40 different spices in their kitchens.  They claim that bold is replacing boring.  When I recently ran out of cumin,  I found  that McCormick now offers a roasted cumin.  Wow!  I love cumin, and usually toast and grind cumin seeds to get that wonderful flavor, but now it is available all done for me. Other flavors that can be found almost anywhere now include smoked paprika, dried lemongrass, and numerous varieties of sea salts.  When my daughter Kara lived in Spain, I would have her bring home smoked paprika.  About a year after she did that, suddenly it was the trendy spice and it was everywhere.

If you can stand the heat, stay in the kitchen with this cookbook.  The 300 recipes range from somewhat sassy to seriously scorching.  Each recipe is marked with an icon indicating the heat level of the dish, starting with piquant, moving to incendiary, blistering, molten, and ending with thermonuclear.  There is also information on the cultures in which each recipe is traditionally enjoyed, in addition to where to find particular spices on the internet since some may be difficult to find in local supermarkets.  I was curious as to which dishes hit the thermonuclear icon.  There is pork vindaloo, which has 20 dried red de arbol chiles and 8 jalapenos;  Sichuan pork and peanuts in hot and spicy sauce; and a chile oil that has 4 cups of peanut oil with 1-1/2 cups of red pepper flakes!  There are recipes for every level of heat, and they all sound amazing.  I am very happy that I planted a variety of peppers in my garden this year so I can try some of the recipes.  About five years ago, I harvested dozens of habaneros and scotch bonnets.  I found out very quickly how incredibly hot they are.  I remember making a salsa with what I thought was a small amount of habaneros.   Ha!  I took one bite and thought that smoke was coming out of my ears.  I watched an Alton Brown show on the Food Network about what to drink if your food proves to be too spicy for your tastes.  Turns out drinking milk or eating ice cream work most effectively.  If you decide to make the pork vindaloo from this cookbook, have a bowl of ice cream as a side dish.  That wouldn’t be too hard to take!

Cheerio! But Watch Out for Those Ghosts..
Ahhh… Summer Loves and Dreams