Behind the Scenes Before the Bake-Off

Before the Bake-Off contestants of the 45th competition arrived in Orlando, the media came a day ahead to get settled in for the contest.  My daughter Kristina and I were beyond thrilled to be a part of this team.  I left on Saturday afternoon, went easily through a short security line, and found myself seated next to a darling little 6-year old boy on his way to Disney World with his dad.  Unfortunately, dad drank a little too many rum and cokes, and I found myself watching the boy carefully and chatting with him here and there.  At one point, we hit about 15 minutes of uncomfortable turbulence.  My little passenger looked scared, so I told him it was fine, and that we were on a roller coaster like Space Mountain at Disney.  His face lit up immediately, then he bounced around with the turbulence.  He had such a good time doing so, I even let go of my white knuckles on the arm rest.  After the tossing around finally ceased, the little guy declared, “Wow!  That was so much fun, I could do it for 503 years!”  I was glad he thought so, because 15 minutes was enough for me!

Greeting me at baggage claim was a friendly Bake-Off team face along with a driver holding up a sign with my name on it.  (why is that so fun to see?)  We got my luggage and went out to the private car for a short ride to the incredible Peabody Hotel Orlando.  Since I was the last arrival, someone took my luggage and whisked me off to a bus that was waiting for me to get there so we could all go to dinner.  Kristina was in the bus, saving me a seat.

Our first media event was dinner at Jiko- The Cooking Place, at Disney, where we dined with the Bake-Off judges and the rest of the invited media.  The food was South African, and completely amazing. 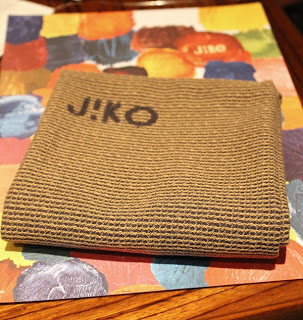 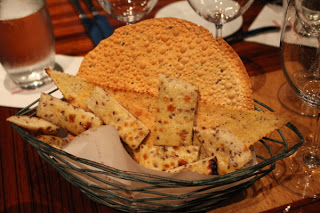 We started out with these wonderful breads and crackers including pappadam, poppy seed lavash, and house-made naan.  They were served with the colorful and flavorful sauces of bhuna masala, sagh dahl, Moroccan chermoula, and kalamata hummus. 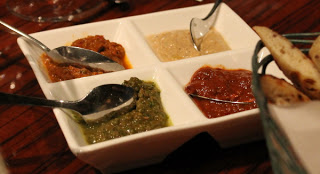 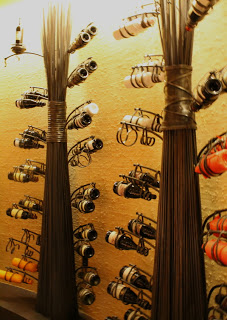 Each course to follow included South African wine pairings.  This interesting display of wine bottles was made especially for the restaurant.  The wine below was one of our favorites. 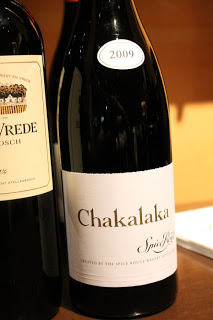 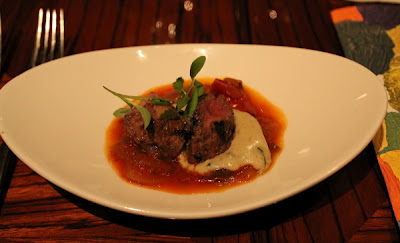 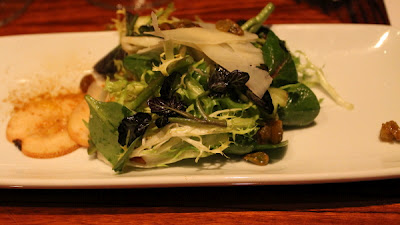 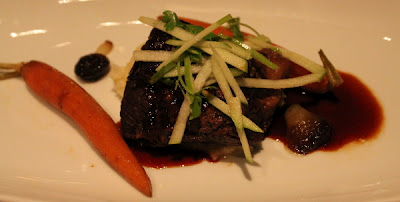 The fourth course was a maize-crusted corvina, vegetables of the moment and tomato-butter sauce, served with Bouchard Finlayson “Blanc de Mer,” Western Cape. 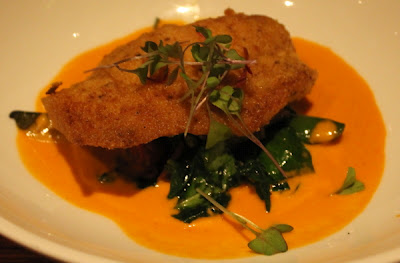 Dessert was a taste of three of their favorite flavors- coconut, strawberry, and chocolate.  All divine!

Kristina and I returned to the hotel and decided the night was still young.  It happened that two contestant friends arrived a day early, and we all decided to meet up in one of the hotel lounges.   At the last Bake-Off, we became friends with Brett Youmans and Linda Bibbo, and had kept in touch ever since.  We met them with their families and had the best time.  It was the perfect way to start our Bake-Off adventure, with good food and good friends.  Kristina and I fell into our beds exhausted, but looking forward to the adventures to follow.  We didn’t get much sleep, as we were awakened by a beautiful breakfast-in-bed, made especially for the media. 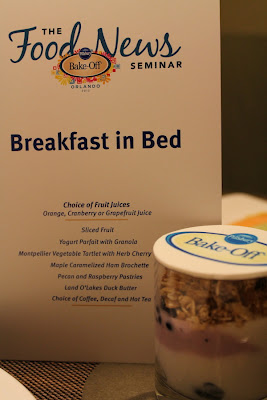 Don’t you love the Bake-Off lid on the yogurt parfait? 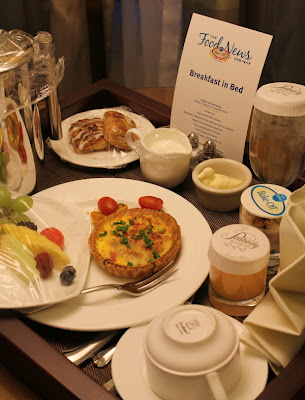 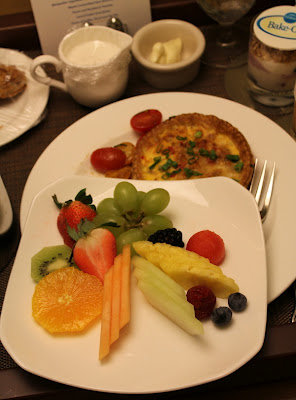 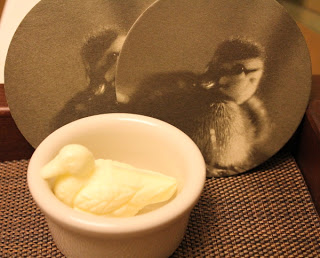 Look at the duck butter in honor of the Peabody ducks!  We even had duck-shaped soap in the bathroom.  More on the ducks later!
After breakfast was a day of seminars, as we waited for the contestants to arrive.  First up was Kelsey Nixon from the Cooking Channel show, “Kelsey’s Essentials,” who spoke about sharing family meals.  Following Kelsey was “The Future of Flavor,” sponsored by McCormick and Company spices and led by several chefs.  This interactive presentation included a  beautiful plate of items to taste, showcasing how flavors blend together. 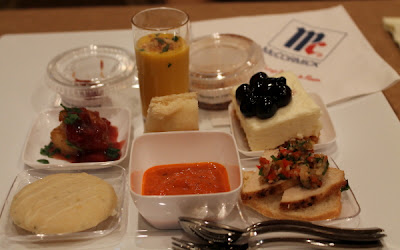 As you may have surmised by now, Pillsbury loves to feed their guests, and feeds them well!  After  breakfast-in-bed, and the wonderful McCormick tastings, it was  time for lunch.  Following lunch was an interesting panel of speakers from Martha Stewart Living, including the editor-in-chief of MSL, the editor-in-chief of Everyday Food, and the executive director of food and entertaining.  These amazing women were fascinating to listen to, and answered questions from the audience.
Next up was a talk and cooking demo from Chef Jeff Henderson of the Food Network’s ” The Chef Jeff Project.”  And more tastings.  The chef charmed the crowd with his beautiful smile, and left us awed by his inspirational story.  We were also able to view the latest General Electric Cafe appliances, which were innovative and beautiful.

Kristina with Chef Jeff
And guess what.  The day isn’t over yet.  As the contestants arrived during the day and later enjoyed their time together at their own dinner, the media was attending the ultimate dinner party – with none other than Martha herself… 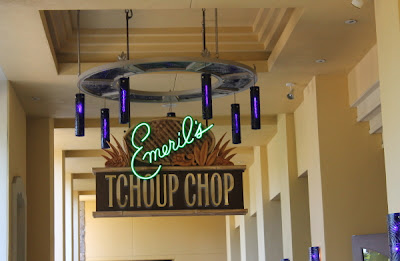 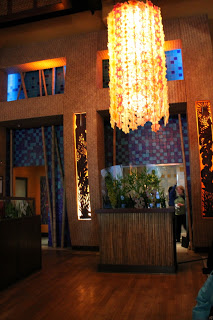 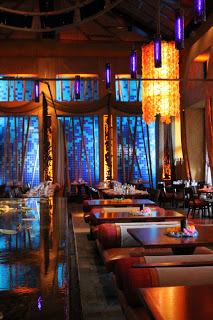 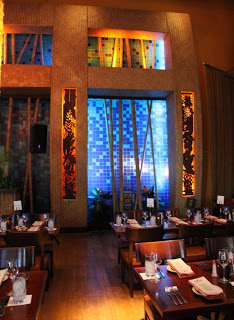 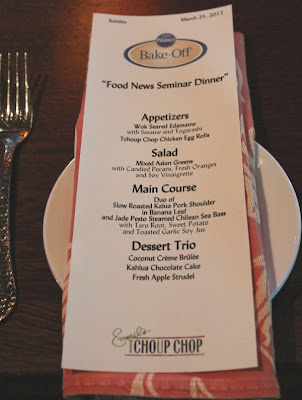 The restaurant was lovely, but when Martha entered the room it came alive.  She graciously chatted with everyone before sitting down to dinner.  Before we began eating, Martha talked about her new cookbook, “Martha’s American Food,” a beautiful book with recipes from all over the country. 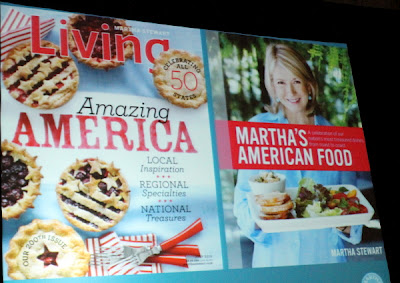 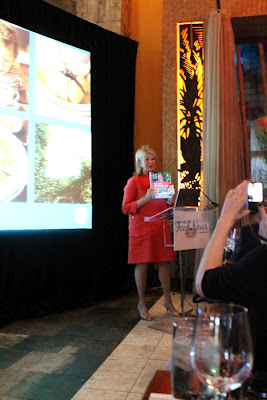 Before being served, Martha came over to our table, held up her camera, and said – “Smile!”  It seems she carries her own camera and puts photos on her media sites.  Martha was seated at the table next to us, but at our table was one of her assistants.  I just had to ask her about Martha’s cookbook collection.  It seems she loves to collect every kind of cookbook, and has a huge library.  I was sighing inside as I listened about her collection, wishing I could someday see it.  I’m sure it’s larger than the few thousand in my basement!  And speaking of collections, as we left the restaurant, I saw Kristina talking to someone and she motioned me over.  It turns out that this lovely gentleman, Steve, told Kristina that he had every single Bake-Off book but one, from the 39th contest.  Well….. I said – I think I can help you.  Since the 39th Bake-Off was Kristina’s 2nd contest, you know darn well this mom bought a bunch of them!  Steve was elated when I told him I had extra copies and would mail him one.  Every Bake-Off lover needs the full collection.
Whew! It had already been two full days of adventure, and the Bake-Off had not yet begun!  I must agree with the statement of my little fellow airline passenger:  I, too, could do this for 503 years.  After all, what is more fun than the Pillsbury Bake-Off?
Come back tomorrow for the story straight from the Bake-Off floor and see who wins the million dollars!
I Have So Much to Tell You….
Pillsbury Bake-Off #45: Pumpkin Ravioli with Salted Caramel Whipped Cream

13 Responses to Behind the Scenes Before the Bake-Off