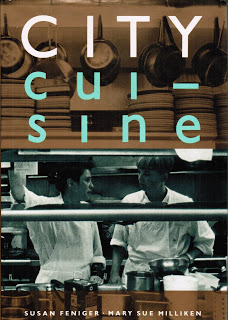 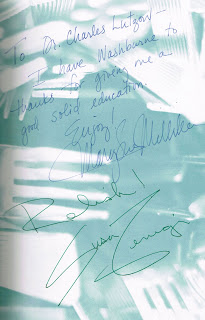 Being a big fan of Top Chef and other cooking shows, imagine my delight in finding this cookbook last week at a library book sale.  I have enjoyed reading and watching these two talented chefs for many years and then hit the jackpot when the book turned out to be a signed copy.  The inscription to Dr. Charles Lutzow and his assumed connection to Mary Sue Milliken’s culinary training at Washburne piqued my curiosity.  I googled Washburne, and it turned out to be Washburne Culinary Institute in Chicago.  Susan’s formal training was at the Culinary Institute of America.  Both women are Midwesterners, Susan from Ohio, and Mary Sue from Michigan.  Their paths first crossed in 1978 at Chicago’s Le Perroquet, where they were the first women to work in the prestigious kitchen.  Susan left to work with Wolfgang Puck at Ma Masion in California before leaving for France.  They met again in Paris where Mary Sue worked at Restaurant d’Olympe, and Susan at L’Oasis.  They just seemed destined to work together.

In 1981, the two talented women opened the tiny City Cafe on Melrose Avenue in Los Angeles.  They quickly outgrew the space and opened City, which they ran from 1985 to 1994.  Their food changed the culinary landscape of Los Angeles with its eclectic cuisine seasoned by their training and travels to exotic lands.  With the admiration of the public and critics alike, it was no surprise that their next restaurant, Border Grill, was named one of the best restaurants in America by Gourmet Magazine.  There are more awards too numerous to mention, but my favorite was when in 1993, they were two of only sixteen chefs to be invited to cook with Julia Child in her PBS series, “Home Cooking with Master Chefs.”  Being natural teachers, both women have shared their passion for food through cooking shows, such as their popular “Two Hot Tamales” series with the Food Network.  Susan appeared not long ago on “Top Chef Masters” on Bravo.

The recipes in City Cuisine are fun, easy, and innovative with bold flavors and textures.  There is comfort food such as peanut butter cookies, homemade ice cream, bread puddings, and homemade hamburger buns, to the more exotic chanterelle risotto, roasted black cod with coulis of horseradish, and braised duck with red curry.  They claim their favorite chocolate recipe is for cupcakes Hostess-style.  There is a recipe for everyone at every level of cooking in this book.   I don’t know how the signed copy ended up at a small town library sale in Illinois, but I am thrilled to own it.

Cookbook Give-Aways for the Week of 9-20-10
An Amazing Gift from Electrolux and Abt!