Cobblers- Not just for Colonial America! 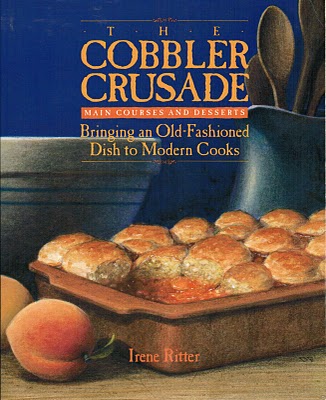 The All-American cobbler is one of our country’s oldest and ultimate comfort foods.  It has come a long way from its humble beginnings as an early Colonial-American breakfast dish.  Some culinary experts claim a shoe-cobbler’s wife created the dish, while others suggest it is simply named after the cobblestone streets of the time because of its covering with mounds of crust.  However it was named, it remains a favorite in the hearts of Americans.  There are two schools of thought concerning cobbler dough.  Some chefs consider pastry or pie crust made without baking powder to be a true cobbler crust.   This unique cookbook takes it to another level by adding ingredients such as pecans, oats, raisins, seeds, cornmeal, herbs, and even crumbled cookies.  Fillings can be more than fruit; they can be savory with such items as zucchini, pumpkin, seafood, beef, lamb, chicken, and vegetables.

This book came to my mind because HBO is running the John Adams mini-series again, which made me wonder if he enjoyed a cobbler.  I searched in some of my old First Ladies cookbooks, and found that he did indeed enjoy his wife Abigail’s apple cobbler.  His son, John Quincy Adams, loved peach cobbler.  I find it endlessly fascinating what our forefathers enjoyed for meals.  I wonder how they would react to some of the non-traditional cobblers offered in this marvelous cookbook.  Some of the ingredients were virtually unknown back then.  I don’t think a “Southern Italian Sausage and Onion Cobbler with a Romano Cheese Biscuit Crust” would have been served at the Adams dinner table.  But doesn’t that sound good??  How about a “Chiles-Rellenos Cobbler with a Cornbread Crust” and served with fresh tomato salsa and avocado slices; or a “Beef Bourguignon Cobbler with a Bacon-Onion Crust”; “Sauerbraten Cobbler with Gingersnap Crust;” or for dessert, a “Sicilian Cassata Cobbler with a Chocolate-Espresso Topping;” or such fillings as banana cream, coconut, or creme brulee.  We will just have to say that John Adams and his family loved cobblers, and there must be something to it, because he lived to the ripe old age of ninety.  I think I could eat these dishes until I’m ninety.  But I don’t think I could run the country.

Happy Birthday to My Bill! And a Cookbook From Michigan
Lake House in Australia