Day Three of the Epcot International Food and Wine Festival: Now it’s Time to Say Good-bye, to All our Company…

Day three of the festival begins with breakfast at Kouzzina by Cat Cora of Iron Chef fame, at Disney’s Boardwalk, a short stroll from our hotel.  After a tasty breakfast, we were given tickets and wrist bands for the upcoming day and evening events, then headed out to a cheese and wine seminar, with Max McCalman of artisanalcheese.com.  We tasted four kinds of French cheeses and two kinds of wine, deciding which tasted best together.  My favorite was the Ossau-Iraty.  The others were Brillat Savarin, Comte Fort St. Antoine, and Fourme d’ Ambert.  The wines were Mouton Cadet Blanc, Bordeaux, and Mouton Cadet Rouge, Bordeaux.

Kristina and I agreed that we were going to steal the idea for this centerpiece!  So simple, yet adorable! 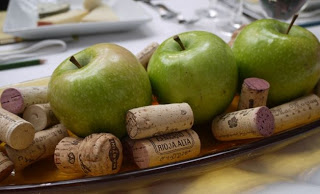 After the seminar, it was time to head out to the festival.  There was about a mile and a half long stretch of nothing but food from many countries, one after the other.  It was very hot and the lines were long in some places, so we didn’t get to taste all the food we were hoping to, but loved the lettuce wraps from South Korea.  We were given little booklets telling what food was available from each country.  From China, you could enjoy caramel ginger ice cream or pork pot stickers; Brazil had a shrimp stew with coconut and lime; Argentina offered a roasted corn and cheese empanada; Germany, an apple strudel with caramel sauce; Morocco, falafel pita pockets and baklava; and from Belgium, a baked waffle with berry compote and whipped cream. 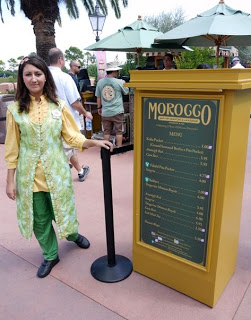 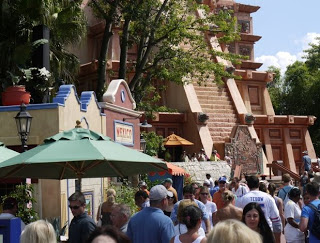 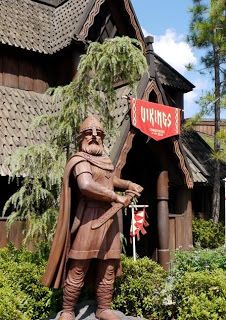 After completing the amazing food tour, we headed back to the hotel to freshen up for the big and final party of the weekend, the “Party for the Senses,” with more food stations and live entertainment, including Cirque de Soleil. 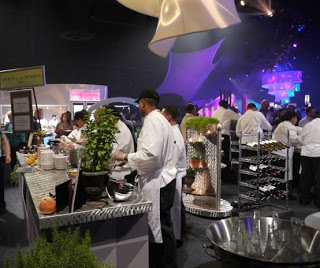 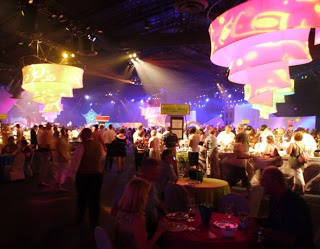 As you can see, it was a very lively event in a nightclub-type setting.  We sat and chatted with our beloved host, Charles, for a long time until it was time to leave, once again full and happy.  As we walked out to the parking lot with Charles, he pointed out an enormous greenhouse.  Inside, he told us, was a 9-pound lemon, a Japanese tomato plant with a thousand tomatoes, and cucumbers grown in a mold shaped like Mickey Mouse.  My little backyard garden is jealous.

Kristina and I packed up our suitcases, with all our goodies, including the gingerbread houses.  We fell asleep, exhausted and exilarated from the unforgettable weekend at Disney.  As we were waiting for our bus to take us to the airport in the early hours of the morning, employees of the hotel were already hard at work.  There was even someone who walked around fluffing up all the pillows on the sofas.  We have already decided next time we are at Disney, the Yacht Club and Resort is where we will stay.  I highly recommend it.  It was great to walk out the door and be able to walk right into Epcot.

Our bus driver to the airport was very chatty and entertained the riders with all kinds of Disney trivia.  Did you know that Walt Disney paid 50 cents an acre for the 28,000 acres of land, and that he was ridiculed for buying worthless swamp land?  After arriving at the airport, we checked our bags and entered the security line.  Here is where the story comes in about our glass, wine-bottle-shaped cheese platters that I promised in an earlier blog to tell you about.  My bag that held these gifts was stopped and inspected.  A TSA employee picked up my bag and said – Madame, just how many wine bottles are you carrying?!  I told her I didn’t have any wine bottles.  She looked at me like I was nuts, and zipped open the bag.  After searching around, she held up the flat, wine-shaped cheese servers, rolled her eyes, and put them back.  It seems that on the inspection screen, they just looked like real wine bottles!  After our gingerbread houses came through, we inspected them and found that they were broken and falling apart.  We were sad, but knew they would have to stay behind.  We asked a TSA employee where we could throw them away, and he looked at us, aghast, and said, You can’t throw those away! How could you throw those beautiful houses away?  He must have been overheard by other employees, as about half dozen people showed up, admiring our houses, broken as they were.  Finally, one of the employees set it on top of a cleaning cart.  A couple minutes later, the worker came to get her cart, looked very puzzled that gingerbread houses were now on her cart that weren’t there a minute ago, and she proceeded to take our her phone and took photos of them as she giggled with delight!  We hoped she would take them home and eat them for dessert.

I forgot to mention the name of our chatty bus driver, Richard Cenatiempo.  As we started to board the plane, Kristina asked me if I knew what his last name meant.  Turns out in Italian, it means “Time for Dinner.”  After we laughed about this, we both decided to pass on dinner for at least the next week.

Thank you to my daughter Kristina for letting me come along with her, and to Disney, Pam, Karen, and Charles- thank you for the time of our lives.  It was truly magical.

2 Responses to Day Three of the Epcot International Food and Wine Festival: Now it’s Time to Say Good-bye, to All our Company…