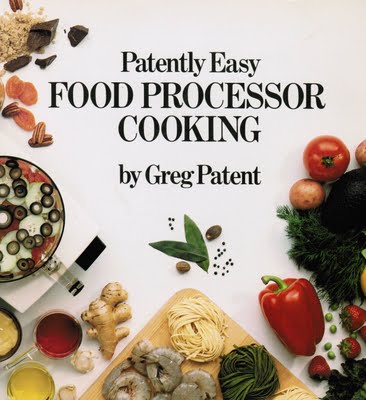 If you read my Bake-Off blog from yesterday, you know about Greg Patent, who was a prize winner from the 1958 Pillsbury contest.  Greg never stopped cooking since the Bake-Off, even though he earned a Doctorate in Zoology from the University of California at Berkeley.  He became a full professor at the University of Montana, but kept up with his love of cooking as a hobby.  Greg even starred in a local television series called “Big Sky Cooking.”  Eventually, Greg found himself spending more time thinking about food than zoology, and he turned his first love into a second career.

Greg bought his first Cuisinart food processor in 1976.  He traveled all over the country teaching food processor classes to thousands of eager students.  He learned that everyone wants to prepare dishes that are quick, delicious, nutritious, and attractive, with a minimum of fuss and bother.  It was with this in mind that Greg developed this cookbook.  The book has delicious recipes for appetizers, soups, pasta, quiches, salads, main dishes, potatoes, rice, vegetables, bread, and desserts.  There are chapters for food processor techniques and notes on accessories and ingredients.  It’s everything you have ever wanted to know about a food processor.

I am a huge fan of homemade soups, and I can’t wait to try some of the recipes.  However, since we are having the hottest days in Chicago in two decades this week, I think I will wait for the cool weather to begin!  When it’s time, the first one will be the cream of broccoli soup.  My garden will soon be filled with zucchini, and I will try the rice and zucchini casserole, along with the zucchini and red pepper stir-fry.

Grab this book if you see it.  Dr. Patent knows what’s good!