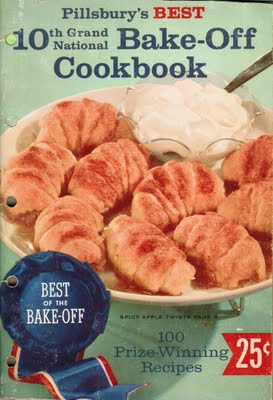 Dorothy DeVault from Ohio entered eight previous Bake-Off contests and told her husband each and every time, “Someday I’m going to win!”  Dorothy baked almost every day for her husband and two boys and never gave up trying.  In her spare time, Dorothy also wrote children’s stories and was active in her church and PTA.  She picked a good Bake-Off to win, as this was Pillsbury’s 10th anniversary of the contest.  An elated Dorothy is waving her check for $25,000 as host Art Linkletter enjoys the moment with her. 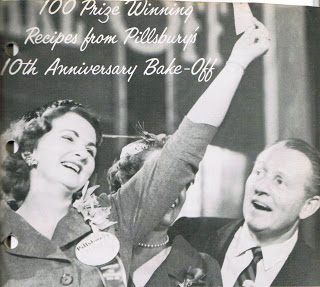 What you don’t see in the photo is that Dorothy was pregnant with her third child.  Dorothy’s winning recipe was “Spicy Apple Twists” and people told her she should name her baby Apple Twist.  I bet Dorothy got a huge chuckle years later when she learned actress Gwyneth Paltrow named her daughter Apple!  Dorothy was way ahead of her time!  Apple Twist turned out to be Melinda Joanne instead. However, Dorothy said, “I did have to promise Apple Twists for the nurses as soon as I got back home, though.” 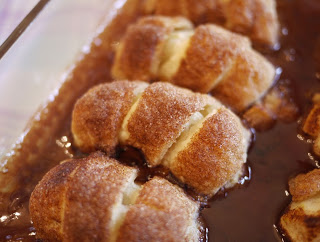 These luscious apple-filled pastries are brushed with butter and sprinkled with cinnamon and sugar.  Water is then poured into the pan, forming a delicious buttery sauce as it bakes to perfection. 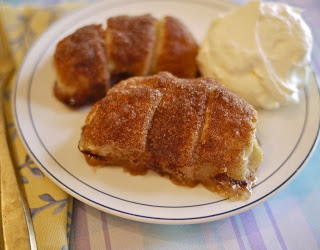 I imagine Dorothy and her family still enjoying this timeless dessert.  Through the years, Dorothy became involved in the Girl Scout organization. While 2012 marks the 100th Anniversary of the Girls Scouts of the USA, Dorothy celebrated her own milestone.  Dorothy is now an 86-year-old grandmother celebrating 75 years of being a Girl Scout herself.  She has her own wonderful memories of camping trips, crafts, and other adventures which I bet included cooking over a campfire! For twelve years she was the leader of daughter Melinda’s troop.  Melinda says of her mother, “It was great. She was an awesome leader.  She was always very involved and enthusiastic and checked into every opportunity the girls could have.  We were always going somewhere.”  Now Dorothy is helping her granddaughter’s troop, and can boast of four generations of Girl Scouts.  Activities like Girls Scouts and cooking keep a person going.  Look at Dorothy now with the same sweet smile and tilt of the head, still looking like the winner she is.  Thank you, Dorothy, for helping so many girls find their potential, and for giving us such a beautiful recipe. 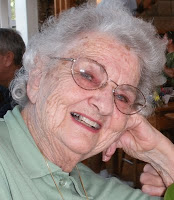 As Dorothy was preparing her apple twists on the Bake-Off floor at the Waldorf Astoria, a young man from San Francisco was busy preparing his own entry.  Greg Patent may not ever have guessed at that moment in time he would grow up to be an award-winning cookbook author.  Here again, we have another superstar in the food world who began with Pillsbury flour at a Bake-Off contest.  Greg’s entry, “Apricot Dessert Bars” won the $1,000 Junior Second Prize.  (When Pillsbury published the recipe, it became “Golden Gate Dessert Bars”).  Greg’s impressive career continues to this day.  There is so much to know about Greg, that you must visit his website http://www.gregpatent.com/ to read about his accomplishments.  However, I have more for you to read right here in Greg’s own words.  To back track a little, I have a dear friend, Shirley,  who knows (and adores) Greg.  Shirley assured me that Greg would probably be more than happy to share his Bake-Off experience with my readers.  I am thrilled to present you with Greg’s personal memories of Bake-Off #10. 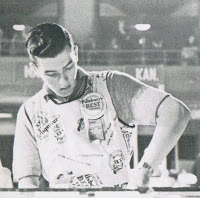 Greg Patent’s Reminiscences of Pillsbury’s 10th Bake-Off:
Competing in Pillsbury’s tenth Bake-Off as a nineteen-year-old was a heady experience.  Held in the grand ballroom of New York City’s legendary Waldorf-Astoria Hotel, the place teemed with reporters, photographers, and celebrities.  I donned my frilly Pillsbury apron and soon was introduced to Irene Dunn, one of my favorite movie stars, and Art Linkletter, whose wit and charm on television were matched in real life.
As one of the twenty junior contestants, I had my job in front of me.  At my range, any nervousness I had earlier (I couldn’t eat a bite of my breakfast in bed) evaporated, and I was all business.  The recipe that got me into the Bake-Off, my one and only entry, was something I called Apricoquettes, a take-off of the classic oatmeal date bar cookie where I substituted coconut and walnuts for the oats and cooked apricots for the dates.  I baked it in a 9 X 13 pan and cut the baked sweet into smallish squares that I decorated with sweetened whipped cream piped through a pastry bag. I went into a panic when the cream refused to whip up and ran to one of the home economists nearby for help.  She said because the ovens and lights were producing so much heat I should freeze the bowl, beaters, and cream.  That did the trick, and my bars went to the judges.
The awards luncheon was televised the next day, and my mother and I and a few other contestants were seated at a table hosted by Ronald Reagan.  When it came time for the awards, it turned out six winners were at our table!  One by one we stood and were handed our checks.  I kissed mine and then discovered it was for one of the other contestants, a Bride category winner.  We all had a good laugh and exchanged checks.  I took second prize in the Junior division and won $1,000, a very tidy sum back in 1958, enough to loan it to my parents to put a down payment on our first home in the San Francisco Bay Area.
I treasure my Bake-Off experience because I met incredibly talented and enthusiastic bakers, and we were all there to have the time of our lives.
Thank you, Greg!  Watch for Greg’s next book, “Baking Wizardry,” and a new blog by the same name.  And I just might be able to snag a copy to give away to one of my readers in a future blog!
Here are some of the other prize-winning recipes from Bake-Off # 10:
-Senior Second prize winner “Empire Torte”  by Mrs. Louis Slavik of Bedford, Ohio
-Bride Second prize winner “Peanut Brownie Drops” by Mrs. Frank Hills of Port Allegany, Pennsylvania
-Bride Third prize winner “Merry Mincemeaters” by Mrs. Richard Hotze of Elk Grove Village, Illinois
-Senior First prize winner “Swift Currant Cakes” by Mrs. Osborne Phelan of Miami Shores, Florida
-Junior First prize winner “Double Date Devil’s Food” by Mary Ann Wasylow of Grand Forks, North Dakota
-Senior Third prize winner “Strawberry Pie Delicious” by Mrs. T. A. Police of New Philadelphia, Ohio
-Second Grand Prize Winner “Golden Cake Bread” by Mrs. L. M. Jehlik of Westchester, Illinois
-Junior Third prize winner “Tomato Cheeseburger Pie” by Trudy Roelle of Peetz, Colorado
To read more about the Pillsbury Bake-Off contest go to:  http://www.bakeoff.com/
To find Dorothy’s winning recipe on the Bake-Off site go to:  http://su.pr/2k9hCG
To read my blogs about all the previous Bake-Off contests:
Bake-Off #1: http://su.pr/7gmylO

Bake-Off food photos are taken by my daughter, Kristina Vanni.  Check out Kristina’s blog at:

Oh, Do you know the Muffin Lady?
Dr. Patent Makes it Easy!