Extra Crispy or with Waffles? 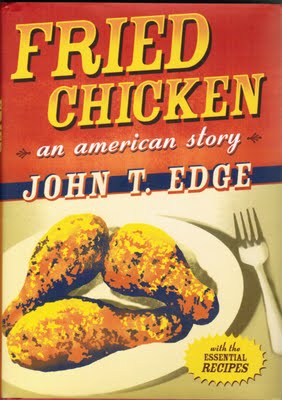 This book was taunting me from the sale table.  It’s like it knew my secret – I don’t make fabulous fried chicken.  Come on, buy me, it beckoned.  I gave in.  I can cook chicken every other way with great success.  I make a mean roast chicken, but deep-fried has always eluded me.  I thought maybe it was because I wasn’t Southern – I’m a Midwest girl.  I didn’t grow up in a fried chicken home, we were always a roast chicken family.  I figured it just wasn’t in my blood.
But this interesting little book changed my mind.  The author seemed to think that there were many people all across the country who could make great fried chicken, and traveled from coast to coast in search of  the best fried chicken recipes.  He ended up with fifteen of the best regional variations on this classic dish.  More importantly, he discovered a part of American culinary history. 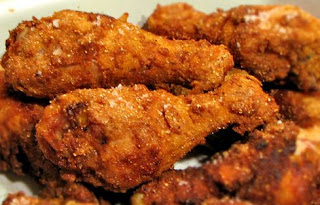 The book will introduce you to many colorful characters, and original recipes such as Italian fried chicken from a man born in India, Creole fried chicken in Louisiana, Buffalo fried chicken in upstate New York, and Latin fried chicken in California.  You will also come to know Deacon Lyndell Burton of Alabama, who operated one of the early integrated lunch spots in the city.  Some would not give up their secret recipes, and others were generously offered.  You will find no nuggets or chicken fingers in this book.  It is strictly chicken that has bones included.
One dish that I haven’t figured out is chicken and waffles.  It’s all the rage now, but apparently it has been enjoyed by many people for decades – maybe centuries!  I think of chicken and I think of waffles, but how did they ever meet on a plate?  And why?  They seem so far away from each other in the kitchen and in my brain.  A regional cookbook published in 1939 features a recipe for “Kentucky Fried Chicken” that is steamed until tender, then batter-fried and served with griddlecakes, grits, or waffles.
Okay, now here is something that I don’t think many friends know about me.  My first job was selling fried chicken.  Specifically, Minnie Pearl’s fried chicken in Oklahoma City.  In the late ’60’s, along with a group of investors, Minnie Pearl, the Grand Ole Opry comedian famous for her homespun humor, opened Minnie Pearl’s Fried Chicken franchises.  Interior designers of the restaurant used her trademark hat, the one with the flower and a $1.95 price tag, as inspiration for the chain’s color palette.  And guess what workers had to wear.  Not the hat, thank goodness, but we did have red gingham pinafores! 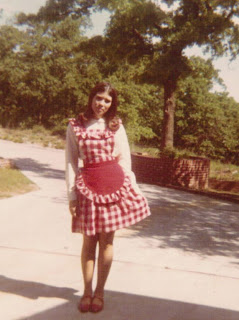 I used to go from working at Minnie’s to cheerleading practice where my friends would say – Debbie, you smell like oil!  Let’s just say I lasted one summer with Minnie Pearl.  Maybe that’s why I can’t make a good fried chicken.  But at least I didn’t have to wear that hat! 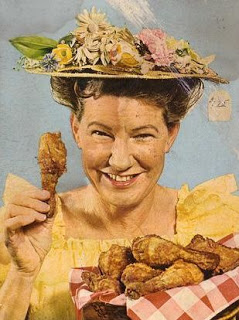 Heavenly Blackberries
Can You Take the Heat?

2 Responses to Extra Crispy or with Waffles?