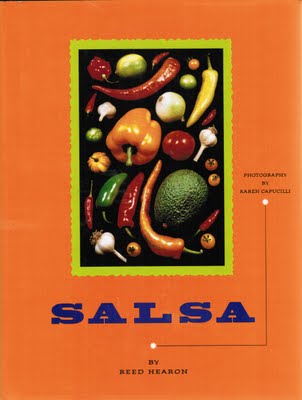 Cinco de Mayo (Fifth of May)  celebrates the 1862 Mexican victory over the French in the Battle of Puebla.  While it sees limited significance in Mexico itself, the date is observed nationwide in the United States as a celebration of Mexican heritage and pride.  Parades are very popular, lively games are played by the children, dances, speeches, traditional foods, mariachi music, and colorful decorations are all a part of the days’ celebration. 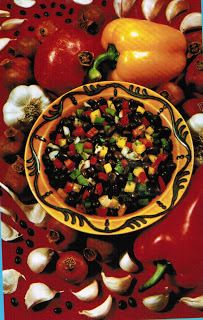 One of the popular foods to serve on Cinco de Mayo is salsa.  Salsa means “sauce,” and is a fiesta for the senses.  Salsa is colorful, sweet, hot, spicy, savory,  and can complement anything from appetizers to desserts.  They can be served cooked or uncooked, but the best and freshest ingredients are a must.  A salsa is only as flavorful as its parts.  Uncooked salsas are best served with ingredients at the peak of their season and served with simply prepared meat, poultry, seafood, or with chips.  Most cooked salsas require a larger amount of herbs and spices than uncooked salsas.

Eating with hot sauces is a warming experience – a sensation will start at the tip of the lips and travel through to the head, then leaving a warm glow in the belly.  Some people who love spicy meals have discovered that they may develop a “salsa sniffle,” the somewhat annoying runny nose triggered by the hot peppers and spices.  The effect can be lessened by seeding and de-ribbing chile peppers, and eliminating peppers such as habaneros and using less potent ones such as a mild jalapeno.  However, it may also lessen the flavor of the dish.﻿ 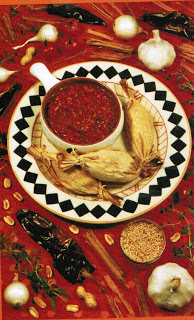 The cookbook describes every kind of pepper and spice you would ever want to use in making salsa.  There is a chapter on techniques such as charring, pan-roasting, toasting, and other instructions.  Even though little or no special equipment is needed for most salsas, there are still suggestions for using blenders, food processors, griddles, skillets, and the old reliable mortar and pestle.  For thousands of years, the right tool was the molcajete, a sort of mortar and pestle made of volcanic stone.  It all comes down to what texture is desired for various salsas.  The recipes range from very hot and fiery salsas, mild salsas, modern salsas, and dessert salsas which include a banana rum, chocolate pistachio mint, and a warm fig salsa served over ice cream. 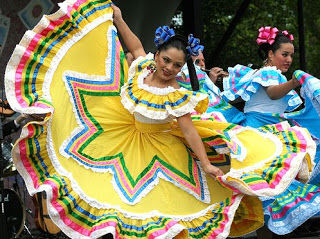 Look at these beautiful and colorful dresses for a Cinco de Mayo celebration.  If you are going to a party, take along some spicy hot salsa, but don’t forget to have tissues handy for those who may get the “salsa sniffles.” (Isn’t that the name of a dance on “Dancing with the Stars?”) 😉

Life, On the Line
Ask Perla