James Beard (The Author and the Bear) 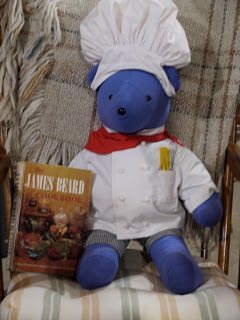 I bought this bear at least 15 years ago.  There used to be (and maybe still is) a line of bears dressed and named as celebrities or well-known characters.  They all had to have the word “bear” in the name, or change it to incorporate the word bear.  “James Beard” seen above was easy to name.  They also made a “Kareem-Abdull-Jabear” for which the company was promptly sued and the bear pulled from production.  I saw that particular bear when I bought “James Beard.”  If I had bought it for the $100 it cost at the time, I could have sold it for thousands now.  My cousin, who was once a personal assistant to Marlon Brando, was thrilled when I bought her “Marlon Bearando” who was dressed in a leather jacket as one of “The Wild Ones.”  I love my little James Beard who watches over my Culinary Cellar! 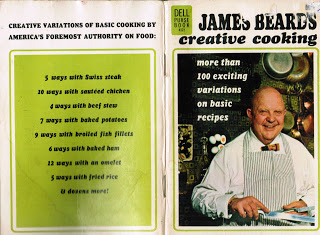 Here is one of those tiny little Dell books found at checkout stands.  I bought this one for 25 cents in 1966 when I was in high school.  It’s actually an interesting little book.  He takes everyday classic meals such as basic Swiss steak and explains how to make it with beer, with red wine, Hungarian-style, or Mexican-style.  For a basic baked ham, he says it can be prepared with cloves, honey, dry wine, cider, pineapple, or peaches and bourbon.  There are 9 ways to jazz up chicken breasts, 9 ways to change broiled fish fillets, and 22 ways to prepare eggs from either scrambled, poached, or omelets.  He also includes grain dishes, salads, vegetables, fruits, and sauces, which I thought was one of the best chapters.  But here is the funniest quote from the book:

“Good food has magic appeal.  You may grow old, even ugly, but if you are a good cook, people will always find the path to your door.” 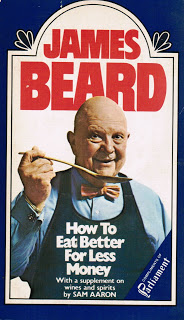 This next book, a paperback from 1970, was originally published in 1954.  James said he brought it back almost 20 years later because the cost of living continues to climb.  Sound familiar?  The paperback version added a section on budget wine and spirits.  Every chapter is relevant to today’s cook with suggestions of how to shop wisely, entertain on a budget, how to avoid waste, and how to use your imagination to prepare gourmet meals with little cost and effort.  He explains how to get six meals from a 16-pound turkey, and countless suggestions on what to do with leftovers.  Some of the recipes are rather long and involved which may not be appealing to some cooks today, but he claims they are all worth it if one wants to use good, fresh ingredients, which are more cost effective.

Isn’t it nice to know we can still impress friends and family with inexpensive, gourmet meals, and learn how to make eggs 22 ways in a snap even if we do “grow ugly?!”  Well, at least my bear will never age!

South Pacific Recipes and Adventures
A Jewel of a Recipe