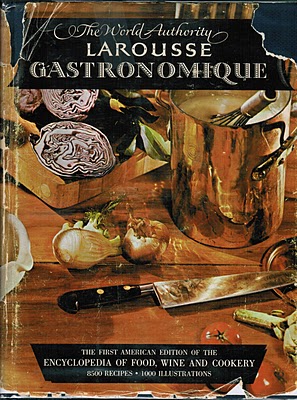 This is the 1961 version of the internationally famous bible of cooking, an extremely large and heavy encyclopedia-type book with 8,500 recipes, 1,000 illustrations, and has been heralded as the prime reference book of chefs for decades.  At one time, it was only available in French.  In order for it to be translated into English, it took twenty culinary experts over three years of intensive work to convert it to American usage.  The book contains descriptions of cooking processes, details about every food imaginable, history of food and cooking, articles on table service, and of course, thousands of recipes.  That may be the description in a nutshell, but you have to hold and read this instructional book to get its full impact.  I have a tendency to become lost in bookstores and libraries, where I can find a chair and browse through book after book.  This one book is like being in a bookstore all under one binding.  If it wasn’t such a monstrous size, and weighed as much as a small person, I would take it on airplanes to keep myself happily occupied for hours.   I’m not trying to discourage finding this book- quite the opposite; just find a sturdy place to sit at a table.  The book is like a reliable friend in the kitchen, ready for consultation whenever it is needed.
Just like the Joy of Cooking I wrote about on yesterday’s blog, Larousse Gastronomique has gone through many revisions, bringing it into a more modern era of cooking.  Newer versions include recipes and ideas from the so-called molecular chefs, where to some, familiar food becomes a foam or some kind of high-tech fare that one would expect from the kitchen of the Jetson’s; others believe this avant garde cuisine is genius.  I think it depends on who is cooking it.  I wonder what Escoffier, the acknowledged father of French cookery and who helped to compile the first edition in 1938, would make of such culinary feats?  I wonder if he would prefer to chew his food rather than spray it up his nose or eat it in the form of a powder?   I think it’s fascinating what can be found in the culinary world today, and I would love to try it all – but isn’t there something romantic about this lovely table of sweets, or  the pate de foie gras shaped and decorated by hand, from an 18th century document?  I would love to own all the updates of the book, but I will always go back to the older versions to transport back to the days of Escoffier. 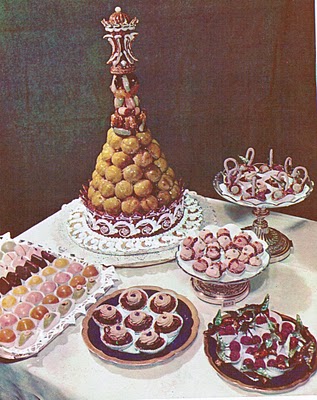 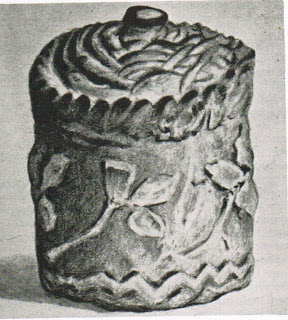 Oh, the Joy!
Life, On the Line

One Response to Larousse Gastronomique: The First American Edition