Making Piece: How Pies Can Save the World

You won’t be able to read this book without wanting to make a pie, or take a trip to Iowa.  I made the pie, but not the trip… yet.  It’s going to happen, and soon.  I have a great love of Iowa and pie, which is probably why I couldn’t put this book down.  It’s a food story, a love story, a tragedy, a piece of Americana, and a triumph of the human soul.  Yes, a pie can achieve it all, claims author Beth M. Howard.  I believe her.  And she will make a believer out of you.
Beth Howard grew up in Ottumwa, Iowa, a mere twenty miles from the famous Dibble house, also known as  the “American Gothic” House, as depicted in the 1930 Grant Wood painting.  The 700-square foot house built in 1881 is creaky and old, but is now Beth’s home.  How she got there was a personal journey of healing, facing fears, finding meaning and purpose in life, recovery, and ultimately, joy and hope.  And, of course, pie. 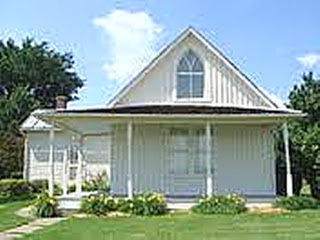 To get an idea of where Beth lives and why, there is interesting history to understand about the house. Artist Grant Wood studied painting in France and Italy, but ultimately came to the conclusion that painting Iowa was his calling.  He famously was quoted as saying, “I had to go to France to appreciate Iowa.”  As he was riding with a friend through the town of Eldon, he spotted the Dibble house with its big Gothic window.  He immediately decided he wanted to paint this house with his sister, and his dentist holding a pitchfork, as the subjects in front of the home, thinking they embodied the American spirit and Midwestern culture.  When he completed the painting a few weeks later, he submitted it to a contest being held at the Art Institute of Chicago.  The story goes that the judges didn’t care for it and tossed it in the garbage.  Wood rescued it and convinced them to award him third place, and soon after became a leader in “regionalism,” a school of American art depicting realistic rural scenes.  The painting still graces a wall in the Art Institute in Chicago. 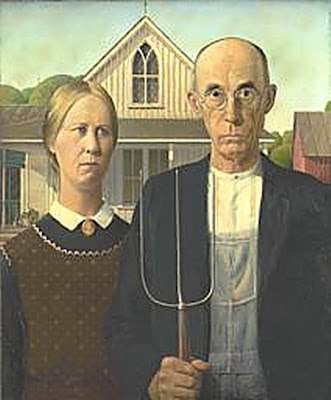 It’s a wonder that Beth even made it back to Iowa.  After high school, she couldn’t leave fast enough to attend college in Washington state.  After graduation, she worked as a Hollywood publicist for television shows, including “Beverly Hills 90210.”  She had the good life in Malibu where her friends thought that she “had it made.”  Beth wasn’t so sure she had it made, and tired of the fast-paced and stressful job in an urban life.  She decided to take to trip to Crater Lake National Park in Oregon, where she met the man who would change her life,  Marcus Iken who was an executive in the German auto industry.  They immediately hit it off and dated long distance for two years before marrying.  Tragedy struck in 2009 when Marcus died suddenly of a ruptured aorta.  At the time, the couple was living apart and considering divorce (which they didn’t really want), and his death filled Beth with guilt and extreme grief.

Just two years ago, Beth decided to take a cross-country road trip in the RV that Marcus had left her.  A few weeks into the trip, Beth found herself in Iowa looking at a sign that read “American Gothic House.  Six miles.”  She turned off the highway and drove to the tiny town of 900 residents.  A staff member who helped take care of this iconic house, listed in the National Register of Historic Places, gave her a tour.  The house had not been lived in since 2008, and was filled with mouse droppings and cobwebs, in dire need of some tender loving care.  Beth knew deep down that would be her job.  Her family and friends thought she was crazy.
Beth thrived in the house.  As she worked through the grief of losing her husband, it was pie that saved her.  Beth decided to sell her homemade pies- apple, cherry, and strawberry for $20 each on a pie stand outside the house on weekends when tourists arrived.  Her “Pitchfork Pie Stand” was a huge hit.  She even make the pitchfork symbol on top of the pies for venting steam. (her recipes are in the book!)  Soon she had television and documentary films about her pies in the works, and life was never the same.  Beth found solace and peace in her pie-making, and a way of life she had never imagined would happen.  As she wanders the fields with her dogs at night, she talks skyward to Marcus.  Somehow she knows he hears.
My family has been patient with me lately as I talk nonstop about this book.  My 90-year-old mother just finished reading the book that she downloaded onto her iPad.  She loved it.  I couldn’t wait to write this blog for several reasons.  I have numerous ancestors buried in Olin, Iowa, which is about 2-1/2 hours from Eldon.  My beloved great-aunt Margie lived in the next town over, named Wyoming, where we spent endless summers growing up enjoying the corn fields, band concerts, and the old-fashioned drug store with the best milkshakes in the Midwest.  She was also the town librarian who taught me the love of books.  I can still smell that musty old tiny library. Aunt Margie also taught me how to make everything from scratch.  I learned many basics of cooking in that tiny little Iowa kitchen with the squeaky back screen door.  And of course I watched her prepare many pies. 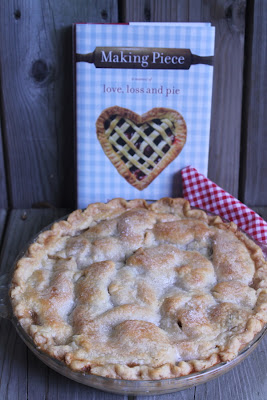 I plan to visit the American Gothic house, maybe even this fall.  Iowa is beautiful in the fall.  I can’t wait to taste one of Beth’s pies, but I will also bring one of my own along to share.
That’s the Iowa way. 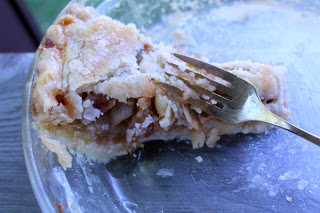 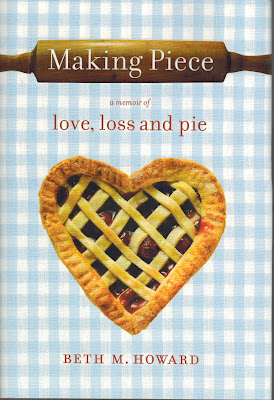 “We must have pie.
Stress cannot exist in the presence of a pie.”
American Playwright David Mamet
"Excite the Senses" Cookbook from Celebrity Cruises
Summer Peaches!

8 Responses to Making Piece: How Pies Can Save the World