Marcus Samuelsson, the NRA, and Bacardi 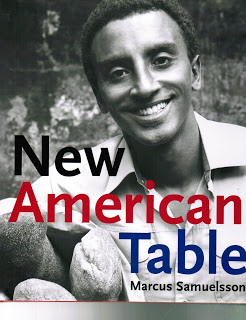 Marcus Samuelsson, the NRA, and Bacardi does not mean the famous chef packed heat and ordered a rum drink; instead it means all three of those combined to make a memorable weekend in Chicago!  This past weekend was spent at McCormick Place attending the National Restaurant Association (NRA) Show!  And what a show it was.  My daughter Kristina and I attend every year and always leave talking about how we can’t wait for the next year.   Last year, Kristina won the “Hot New Chef of 2009” competition, and this year was asked to return and cook again at the “World Culinary Showcase.”  Her cooking demonstration was her winning lamb burger from another contest sponsored by the Australian Lamb Board.  At the same time, Better Homes and Gardens sent Kristina piles of prizes to give away to the audience as she cooked.  It was a HUGE hit!  Who doesn’t like things like free grilling accessories and cookbooks? 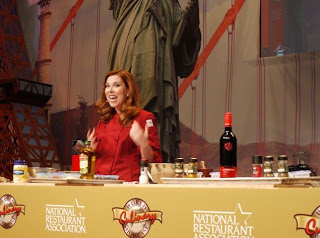 Right after Kristina’s demonstration, she was followed by Marcus Samuelsson and the newly awarded “Hot Chef of 2010,” Jeremy Hanlon from Florida. Marcus has a huge following of fans, and it’s not hard to see why. Marcus is amazing. Not only is his food to die for, but he is a master crowd pleaser. I happened to be sitting right in the front row aisle and had a great view, not to mention the aroma from his food was nirvana. Marcus chatted with the crowd, brought people up to sample, but I was not expecting for him to ask me a question!! He looked right at me and asked, “So what is your favorite recipe?” Of course, I couldn’t think of a thing to say, even though I have all kinds of favorite dishes. I stammered something like I couldn’t possibly pick a favorite because I have so many, and have so many cookbooks from which to chose from daily. He asked me about my cookbooks and then I told him I wrote a blog about them. “What is your blog called,” he asked. I told him and he actually said, “You heard it here, folks!  Go to the culinary cellar.com! Marcus Samuelsson said my blog name out loud and I was in heaven..

But that’s not even the end of the weekend! After the cooking demos, we walked around the amazing restaurant show which is so incredible it’s hard to describe. Vendors offer products and foods to the restaurant industry, and also give away mouth-watering samples to keep the crowd happy. The next day, my youngest daughter, Kara, competed in “The Star of the Bar” contest sponsored by Bacardi at the International Wine, Spirits, and Beer Event, also held in McCormick Place. The grand prize was $5,000, with a total of six competitors vying for the prize. All six were required to prepare their drink for the hundreds of attendees, who then had to vote for their favorite. The contest was narrowed down to the top three, who had to compete again for the grand prize that evening. We were thrilled when we heard Kara’s name called in the top three! While Kara was preparing and giving away her delicious Bacardi-inspired drink, we tried to talk people into tasting her drink and voting for her. We met some great people this way, especially our buddies from New Orleans and Cleveland. (If any of you are reading this, please email me! I would love to hear from you!) Kara competed that evening and did not win the grand prize, but captivated the crowd with her good humor and positive personality! Kara is very much a people person, and they loved her. 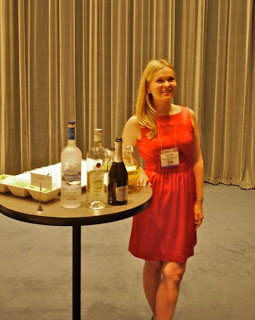 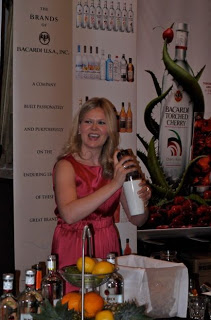 Even after all this fun, I still have to tell you about Marcus’s amazing cookbook, “New American Table.” It’s a big, beautiful book that you will not want to put down once you start reading. Marcus was born in Ethiopia and raised in Sweden. He came to the states only thinking he would be here for nine months. He traveled all over the US sampling everything from barbecue to Czech cuisine. Marcus loved our diversity in cooking and people, and that is how he developed his own “American Table.” This dazzling book offers over 300 recipes that embody the spirit of American cooking with his own special touches. And don’t forget to watch Marcus on this season’s “Top Chef Master 2″ on Bravo.
Before I fall asleep, I will still hear Marcus’s silky voice saying, culinary cellar.com… 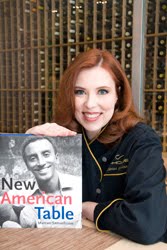