Oh, The Things You Can Learn In Seventh Grade Home Ec 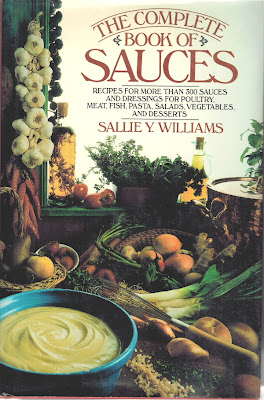 I can still remember making white sauce in my 7th grade Home Economics class.  Our teacher was a stickler for the basics of cooking, for which I am grateful for today.  I learned so much in that class from the different grades of eggs to the white sauces.  She had us make thin white sauce, medium white sauce, and thick white sauce, all with different uses.  We were instructed to go home and raid our refrigerator and make up a recipe with something we found that could be a good dinner if put into a white sauce.  The teacher was also adamant that we learn how to use every gadget available, which probably explains why I have drawers of gadgets.  I loved that class, and actually still have my notebook.  Junior high Home Ec class made a huge impression on me.

When I saw this cookbook at one of my favorite book sales last weekend, I picked it up to see what it said about white sauces.  Chapter three is nothing but white sauces.  I was thrilled and dropped it into my bag of books to buy.  When I got home and dove into my huge stash of books, I wanted to see this one first.  The chapter explanation of white sauces could have been written word-for-word by my beloved seventh grade teacher, along with twenty pages of what to do with it.  After the white sauces came the chapters of wine sauces, butter sauces, mayonnaises, tomato sauces, fruit sauces, sweet sauces, pasta sauces, and more.  Advice is given for such problems as how to get rid of lumps, how to keep mayonnaise from separating, and how to achieve a sauce with a shiny, silky texture.

Sauces are about as old as cooking.  Ancient sauces were very strong flavors, that often hid spoiled meats or other foods.  Our first real knowledge of sauces probably comes from the cookery manuscripts of Apicius.  These “recipes” were for combinations that included the fermented fish paste liquamen, much like our now popular nuoc man, which is easily found in the Asian area of grocery stores.  By the 16th century, the Italians mastered the flour-thickened sauces.  The marriage of Catherine de Medici to Henry II of France brought this art to France, where it was refined, and about a century later, standardized by Pierre Francois de La Varenne.  Bechamel, still the standard white sauce today (and learned in my Home Ec class) was developed for Louis de Bechamel in the court of Louis XIV.  Hollandaise might have been created in Holland by Huguenots who had been forced to flee France, or as sauce history goes.

The reason why sauces are still with us is that they enhance and complement many varieties of the foods we serve.  With this book, you will probably be able to make just about anything or maybe just come up with some new ideas for dinner.  And whatever you can’t find here, I bet it’s in my 7th grade notebook.

One Response to Oh, The Things You Can Learn In Seventh Grade Home Ec