Yes, I mean the 1980 movie with the gorgeous Christopher Reeve and Jane Seymour, which was filmed at the Grand Hotel on Mackinac Island, Michigan.   If you haven’t seen the romantic movie and love a good cry, rent it now.  As lovely as the movie is, the Grand Hotel steals the scenes.  The hotel is beyond amazing.  It was built in 1887 and is only accessible by ferry boat or plane.  There are no motorized vehicles allowed on the island.  All transportation is by horse and carriage or bicycle.  At 660 feet, the Grand Hotel’s majestic front porch is the largest in the world, and is visible as you approach the island from Lake Huron.  There are suites named after First Ladies, in addition to the Lady Astor Suite, Hollywood Suite, Vanderbilt Suite, and of course, the Somewhere in Time Suite.  Even though the movie was filmed in 1980, there is still a huge following and fan club that meets yearly at the hotel in late October. 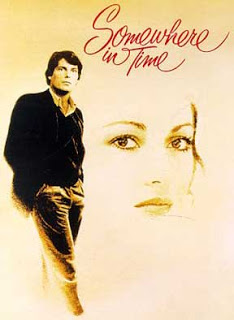 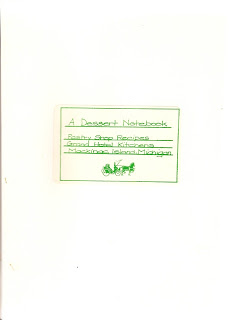 While visiting the island over 20 years ago, I had to, of course, buy their cookbook.  It is called “A Dessert Notebook:  Pastry Shop Recipes from the Grand Hotel Kitchens.”  It is a small plastic white notebook with ring binding.  All of the recipes are neatly hand-printed in bright green.  I believed I paid around $15 for it, and I have seen it online for $58, which means they probably stopped selling it long ago, which is a shame, since it’s a jewel of a little cookbook.    The recipes were developed by pastry chefs James Dodge, Delmar Gardner, Charles McCracken, Herman Niebaum, Louise Schwaiger, and W.S. Woodfill.  The chapters consist of Bars and Brownies, Cakes and Tortes, Mousses and Souffles, Pies and Tarts, Dessert Sauces, and miscellaneous desserts.   The most popular dessert at the hotel is the Grand Pecan Balls, which, alas, is not included in the cookbook.  Over 50,000 Pecan Balls are consumed each season.  However, the other incredible-sounding recipes make up for it.  James Dodge offers Pommes Au Beurre (apples with butter).  It consists of apples baked in a vanilla syrup, placed on top of croutons made of cake pieces, the hollow of the apple filled with butter, powdered sugar and brandy, then covered in an apricot puree.  The Four Nut Tart has a crust of ground almonds with a filling of toasted mixed nuts, including, pecans, walnuts, almonds, and macadamias enveloped in a buttery brown-sugar brandy sauce.  The Dr. Bird Cake was made to honor the Jamaican members of Grand Hotel staff.  The Dr. Bird is the national bird of their country.  This tropical pie includes pineapple and banana.  All the desserts in the book are equally appealing. 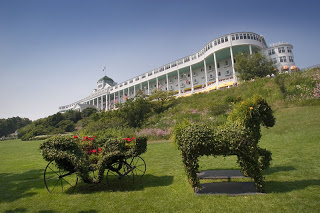 One last note on the beautiful Christopher Reeve.  I always thought he was dreamy and gorgeous, but I got lucky and married a look-a-like.  When my husband, Bill, and I had been married for only a short time, he was on a business trip to Atlanta.  As he approached the ticket agent, she became excitable and breathlessly asked for his autograph.  Bill, very confused, asked why.  She said – You ARE Christopher Reeve, aren’t you??!!   He got a good laugh out of that one!  Even though Bill’s hair is now gray, his blue eyes still have a sparkle, and if I ever get mad at him, he tactfully reminds me of the time he was mistaken for a movie star.  Then I ask him – When is the last time you took me to the Grand Hotel?

2 Responses to Somewhere In Time