The Hospitality and Food of the Finnish Sauna 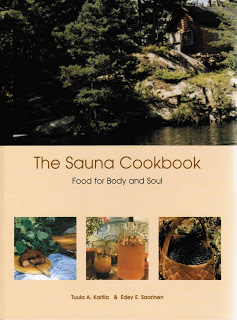 This past weekend was unusually hot for May in Chicago.  I overheard someone say that it felt like a relaxing sauna, which made me remember this cookbook by Tuula A. Kaitila and Edey E. Saarinen.  I bought The Sauna Cookbook:  Food for Body and Soul, several years ago and met the authors at “Finnfest,” which is an annual celebration of the Finnish culture held in the USA or Canada.  Finnfest is a whole other blog entry for later, but I wanted to tell you about this cookbook, and a few things about the Finnish sauna.

There are some rather titillating misconseptions about saunas, which conjure up fancy visions of naked men and women flagellating each other with the twigs of birch trees, while they delight in debauchery and the rites of spring.  It is true that the birch twigs are used, but the swish is lighter than a love tap, and actually quickens circulation while the sauna steam rids the body of toxins, and induces a condition of mellow relaxation.  If you watch the Olympics, you probably have seen the Finnish athletes compete in cross-country skiing or long-distance running.  They credit their superb physical condition to the biweekly ritual of the steamy sauna alternated with a quick shock of cold such as throwing oneself into a cold lake or river, or even snow.  Some plunge into a special hole in the ice called the “avanto.”  Those dedicated to this ritual claim that after a minute in the avanto, one comes out loving the whole world!

So what does the sauna have to do with a cookbook , you ask?  It is known that sauna bathing depletes the body of fluids and electrolytes, thus making it necessary to replenish them with a refreshing drink and salty snack.  The sauna and the ensuing drink and treats together provide food for the body and soul, hence the title of the cookbook.  The Finns will cook food inside the sauna as it heats up.  Some of the popular items include sausages and fish.  Sausages are wrapped in foil and placed directly on the sauna rocks.  Others like to have sandwiches or salted salmon ready to eat inside their homes after relaxing in the sauna.  The cookbook has chapters on all the traditional sauna foods, along with wonderful bread recipes, desserts, beverages, sauces and condiments, and even Christmas foods.  Before all the recipes, the first chapter explains the culture of the sauna itself in Finnish life, which is fascinating.  It has been a ritual in Finland for thousands of years, and is an integral part of entertaining and family life.  People will build their sauna before they even build their home alongside it.

A Finnish saying has it that a woman looks most beautiful an hour after relaxing in a sauna.  It is also said that if enemies take a sauna together, they will emerge as friends.  Wouldn’t that be a wonderful way for everyone to get along?  Whatever the problem, just sweat it out.  But if you can’t take a sauna, at least enjoy the wonderful recipes in this cookbook.

Cookbook Give-Away for the week of 5-24-10!
Support your local Farmer’s Markets!