There is Chocolate, and then there is the Frango.. 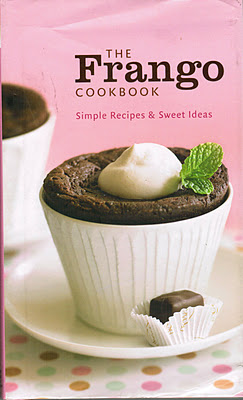 I picked up this cookbook with a little bit of a heavy heart because when I see Frango, I think Marshall Field.  And I miss Marshall Field.  The stores have been permanently closed for years now, but whenever I am headed out to Macy’s, that took over all the Marshall Field’s, I will still call out to my husband – Bye – I’m going to Field’s!  Some things embedded in the brain just can’t be corrected.  However, at least we still have the Frango mint.  It used to be when one walked into a Field’s store, the aroma of Frango’s hit you in the face; now it’s Macy’s perfume counter. Some people swear the candy is not the same, and maybe it isn’t, but I still love them.  Maybe this love comes from childhood memories of Christmas shopping excursions to the massive Chicago Field’s, seeing the big clock, the window decorations, or lunch in the Walnut Room with the big Christmas tree.  Frangos always seem to make people happy.
The candy has an interesting history.  The frango actually started as a dessert that was neither chocolate nor mint.  Maple Frango was a frozen confection served at the tea room of a department store in Seattle called Frederick and Nelson, back in the 1920’s.  Its name may have come from combining Frederick with “tango,” the dance craze at the time.  The company’s renowned candy maker, Ray Alden, created the famous Frango Mint.  In 1929, Marshall Field bought the store as long as getting the frango mint recipe was part of the deal.  Frederick and Nelson’s candy makers traveled to Chicago to train a staff to make the frangos.  Needless to say, they were an instant success with the people of Chicago. 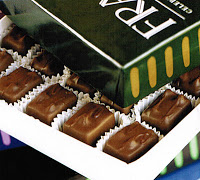 Many people living in the Chicago area grew up with Frango mints.  They are the perfect little bite of chocolate and mint – not too big, not too little.  In this area, Frango mints are given as hostess gifts during the holidays or sent to family in other states who don’t have access to a Macy’s.  I send them to my brother and his wife in Oklahoma, and of course to my mom, who loves mint as much as I do.  There are other flavors of Frangos offered now, but to me, nothing compares to the original mint.
As good as Frangos are, they can be elevated to a whole different level using the recipes in this great little cookbook.  Each recipe starts with a frango chocolate and develops into cookies, brownies, frosting, cakes, pies, cheesecake, mousse, puddings, parfaits, ice cream, and even Frango Rice Krispie Treats. 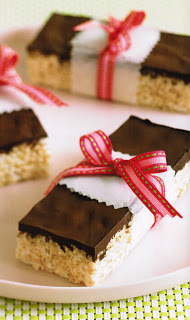 Frango Rice Krispie Treats.  Betcha can’t eat just one!
If you love Frangos, then you must get this cookbook. Give some candy away this holiday season for gifts, but make sure you get a box or two for yourself.

And if you have never tasted a Frango, then I feel sorry for you. 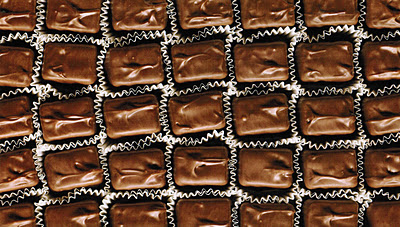 Let Me Play Santa For You!
Cookie to Start Now for Christmas

One Response to There is Chocolate, and then there is the Frango..