Last week in the Chicago Tribune, columnist John Kass wrote a piece titled “Skinny Celebrity chefs are a bit too much to swallow.”  He explains how some people in his office, whom he called “Giandanistas,” were overly excited about Giada DeLaurentiis of Food Network fame coming to Chicago to promote her new line of cookware.  Mr. Kass wasn’t impressed with the spirited response of his fellow workers, and went on to say that there seems to be a skinny chef trend, and not just female chefs, but male chefs, too.  Kass’s own Giandanista wife told him to back off, saying that Giada was perfect and had great recipes that didn’t use a long list of hard-to-find ingredients.  Mr. Kass explains that he thinks a trustworthy chef should have some weight on their bones, like Julia Child or Ina Garten, both who he prefers to the size 00 celebrity chefs.  He also prefers Lidia Bastianich, host of “Lidia’s Italy.”  He says that “All Lidia has to do is put some oil in a pan, toss in red pepper flakes, those clams of hers, and a little wine, and men of all ages line up to propose marriage,” or how Ina Garten, when she “works her magic with scallops and cream and more butter, you feel like driving to the Hamptons to camp out on her driveway.”

With all of the daily news articles about childhood obesity, and skyrocketing rates of type II diabetes, some may rejoice in the fact that we have “skinny” chefs as role models of the food world.  But I really had to chuckle at this article because not only does my husband read John Kass religiously, he completely agrees with him on this issue.  I watch the Food Network and other food shows on a daily basis, and I still remember the first time my husband was walking by and saw Nigella Lawson, the beautiful and “curvy” host of “Nigella’s Bite.”  As he steadied himself because his knees gave out a little, he stammered, “Who is THAT? as he sat down to watch with me.  And he doesn’t watch food shows.  My guess is that if Christina Hendricks of Mad Men fame, dressed her Joan Holloway character as a chef and had a cooking show, my husband would quit watching football. 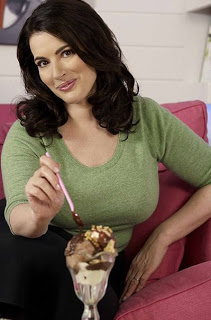 2 Responses to Thoughts on "Skinny Chefs"