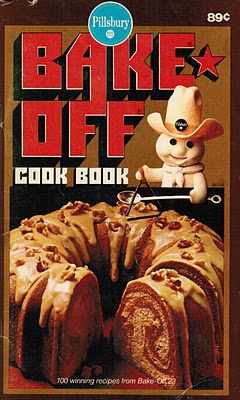 Bake-Off # 23 marks the first of six Bake-Off’s that introduced double grand prize winners. Yes!  Not one, but two lucky people won the $25,000 prize.  I am not sure why Pillsbury started this exciting new twist or why they only did six of them, but I’m betting there were no complaints from the contestants!
This 1972 Bake-Off took place at the AstroWorld Hotel in Houston, Texas.  You could probably have guessed the contest was in Texas as the cover has a lone star and the doughboy is wearing a cowboy hat.   The contestants probably have intriguing stories about the AstroWorld Hotel, once called Houston’s version of the Hearst Castle.  The original hotel built in 1969 is now a Crowne Plaza Hotel.  At one time, the entire top floor encompassed the builder’s (Judge Roy Hofheinz) own apartment known as “The Celestial Suites.”  He spent over a $1 million creating the most expensive suite in the world at that time, which was documented by the Guinness Book of World Records.  The art director for the Disney movie, “20,000 Leagues Under the Sea,” designed the suite especially for the Judge.  It included thirteen rooms, each with a unique design and decor with names like the Tarzan Room, the Fu Manchu bedroom, and the Big Top room with a king-sized bed made from an old bandwagon calliope.  One bedroom has Scarlett O’Hara’s bed from “Gone with the Wind.”  ﻿In addition to Bake-Off contestants, other well-known celebrities including Johnny Cash, Mohammed Ali, Jerry Lewis, President Lyndon Johnson, and Elvis Presley stayed at the hotel.  I would say, hands down, this sounds like the most interesting hotel so far for a Bake-Off contest! 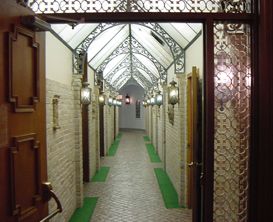 One of the hallways of the AstroWorld Hotel!
Part-time fashion stylist Isabelle Collins from Elk River, Minnesota  was one of the grand prize winners with her recipe for “Quick ‘N Chewy Crescent Bars,” which was made with only 4 ingredients: crescent rolls, sweetened condensed milk, butter, and a package of Pillsbury’s Coconut Almond (or pecan) Frosting Mix.  They are made by pressing the crescent dough into a jelly roll pan, pouring the sweetened condensed milk over the dough, sprinkling on the frosting mix, and drizzling with melted butter.  Don’t they look delicious?

The second winner was Rose DeDominicis from Verona, Pennsylvania for her “Streusel Spice Cake,” a pound cake with a streusel filling and topping.  This winning cake was used as a model to create a new line of Pillsbury’s “Streusel Swirl” cake mixes.  Within a short time after the Bake-Off, Pillsbury looked seriously at Rose’s cake as a potential idea for a product line.  A team consisting of the marketing department, home economists, and food scientists went to work on its development.  After a year of consumer testing, which included group interviews with women all over the country, as well as actual in-home testing, they eventually produced a Cinnamon-German Chocolate and a Spice and Fudge Marble. 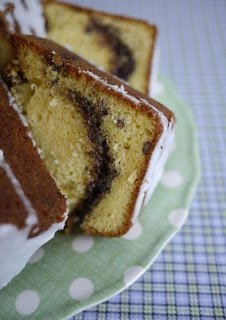 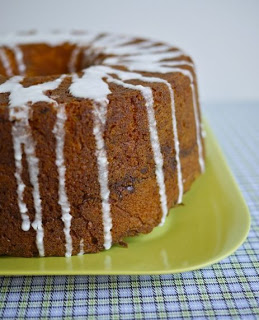 Other prize winners in the contest included $5,000 “Rocky Road Fudge Bars” from Mrs. Bobby Wilson of Leesburg, Georgia.  The $1,000 winners were “Easy Streuselled Coffee Cake” from Mrs. Emil Hynek of Lincoln, Nebraska; “Butterscotch Biscuit Pinwheels” from Debra Hilburn (who competed against her mother, Prudence!) of Piedmont, Alabama; “Easy Cheesy Crescent Sandwich” from Laura Quigley of New York, New York; “Peppy Cheese Quick Bread” from Violet Hester of Long Beach, California;  and”Cheesy Biscuit Rings” from Lynne Goldklang of Hollywood, California.
There was a prize for “The Best Consumer Value Award.”  The winning recipe was determined by a computer which first selected those recipes having the best nutritional balance, and then computed the best price value.  The winner of this award was a high school sophomore, Dennis Batich from Garwood, New Jersey,  who began cooking as young child with his mother.  Dennis said his recipe for “Frank ‘N Bean Biscuit Casserole” was inspired by one of his favorite sloppy joe recipes.  Dennis’ mother had tried many times to enter the Bake-Off herself and had not been chosen, so she encouraged Dennis to give it a shot.  She obviously taught Dennis well!
To read more about the Pillsbury Bake-Off go to:  http://www.bakeoff.com/
To find the Streusel Spice Cake recipe go to:  http://su.pr/2MTJhi
To find the Quick ‘N Chewy Crescent Bar recipe go to:  http://su.pr/6j54Nn
Photos of the Streusel Spice Cake and Quick ‘N Chewy Crescent Bars are by my daughter, Kristina Vanni. Visit her blog at: http://www.betterrecipes.com/blogs/daily-dish
To read my previous Bake-Off contest blogs:

The Art of Curries
What is it about Aussie Chefs??