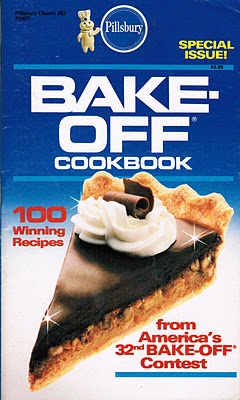 An updated version of  apple pie was the grand prize winner in the 32nd Pillsbury Bake-Off Contest in 1986.  The third try was a charm for Mary Lou Warren of Colorado Springs, Colorado.  Her creation was “Apple Nut Lattice Tart,” with a filling of Granny Smith apples, golden raisins, crunchy walnuts, and a touch of lemon and cinnamon.  The pretty lattice crust was glazed with a confectioner’s sugar icing using lemon juice.  “I ended up with this recipe because I had a 10-inch tart pan at home that I had never used,” said Mary, “so I filled it up with something everyone likes.”  Mary Lou said she gets recipe ideas from magazines and newspapers, then changes them around and adapts to her taste. 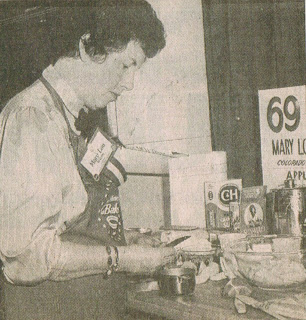 The $40,000 grand prize winner is seen here hard at work with her entry.  Mary Lou taught second grade for nine years in California, moved to Pennsylvania, then to her home in Colorado with her husband and three children, enjoying their home on five acres of land covered with ponderosa pines.  When asked how she would use the prize money, Mary Lou replied, “Maybe I’ll buy my husband a fishing boat.” 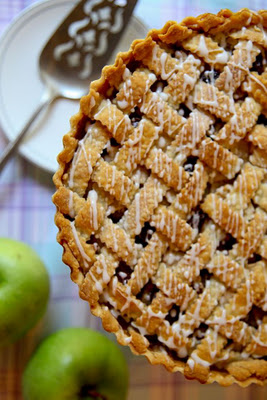 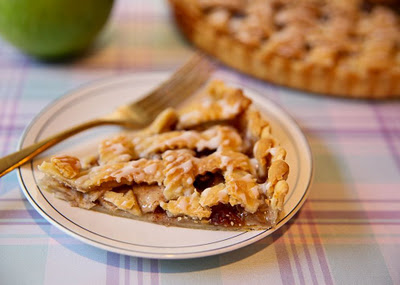 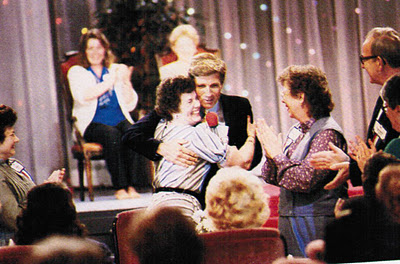 Host Gary Collins, who was there with his wife, former Miss America Mary Ann Mobley, gives Mary Lou a hug after she won her category.  Right after the hug, Mary Lou headed up to the stage with the other category winners to await the announcement of the grand prize winner.
If you look at the photo, there is someone seated on the left with dark hair and back to the camera.  That happens to be me at my first Bake-Off experience.  After years of watching the Bake-Off on television, and having made many of the winning recipes for years, I was finally sitting as a contestant.  There is no explaining how exciting it is to be called by Pillsbury to inform you that you have been selected as a finalist in the country’s most prestigious cooking contest.  It was a thrill I will never forget. 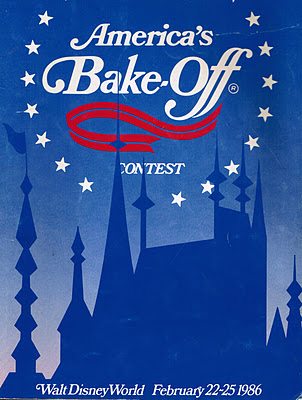 My husband Bill, and daughters Kristina and Kara, were just as excited as I was, especially the girls because it would be their first trip to Disney World.  It was just as enjoyable watching Disney through their wide-open eyes as it was being a contestant.  Upon arrival at Disney’s Contemporary Hotel, contestants were given the above booklet with information about the events of the next few days, and also a brief biography of each contestant.  While the girls were happily bouncing around the room, I sat down and checked the booklet for our schedule.  We soon left for a buffet lunch, a little fun and relaxation, followed by the first dinner.  I met Tony DeSantis and Shirley DeSantis, of the famous cooking family I have mentioned in earlier blogs.  Also at this Bake-Off was Priscilla Yee, who was in my last 31st Bake-Off blog.  Speaking of that contest, you might remember from the last Bake-Off blog, Priscilla was pictured with the “Maryland group,” the enthusiastic crowd of family and friend contestants, many who show up at every contest.  There were there en masse at this contest, too.  George Daston, who entered a yummy white pizza, had his family wear shirts with expressions such as, “Eat My Crust,” “The Great White Hope,” and “Daston’s Spicy White Pizza.”  Expecting this kind of enthusiasm, my master seamstress mother made matching dresses for my girls, and even Kristina’s Cabbage Patch doll, depicting our joy of the Bake-Off. 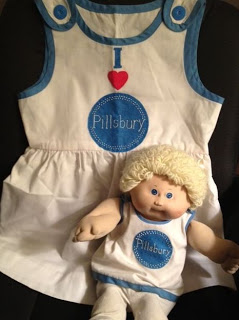 The next day, Sunday, we had to get up bright and early for breakfast and orientation.  While I was involved in contestant activities, Bill and the girls headed straight to the Magic Kingdom via their first monorail ride.  I would catch up with them later in the afternoon.  For the first time, we got to see the official Bake-Off photo of our entry.  Mine was called “Caramel-Almond Apple Tart,” and yes, it didn’t escape me that the only apple tart besides mine won the Bake-Off – and I was at her table!  Too funny. 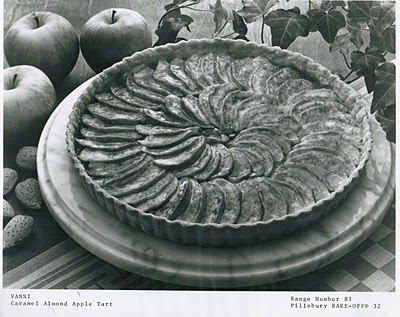 I loved the official photo of my tart! 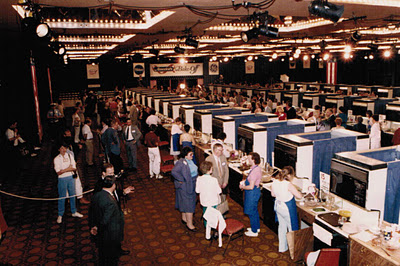 The next morning was Bake-Off day!  I was so excited and nervous as we lined up for the Grand March into the ballroom, which was now filled with 100 ovens ready to start cooking.  I walked right up to oven # 81, and turned on my oven immediately to preheat.  Except it wasn’t my oven.  With the ovens all lined up close together, I got a little confused, but not as confused as the person whose oven I started.  After we had a good laugh and got rid of some of the contestant jitters, the baking began.  Contestants had from 8:00 am to 2:00 pm to prepare their entries up to three times.  I know I made three, but have no recollection of which one I sent to the judges.  It was probably the one seen below, as it looks like it was supposed to look.  The apples are lined up and the crust looks golden. 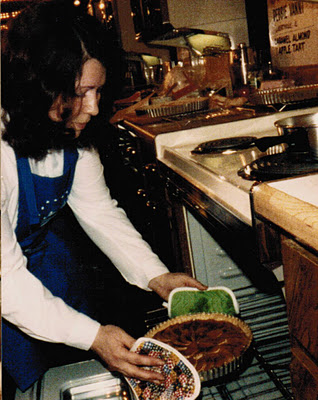 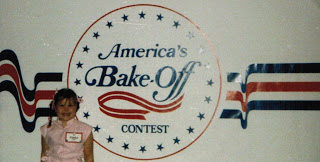 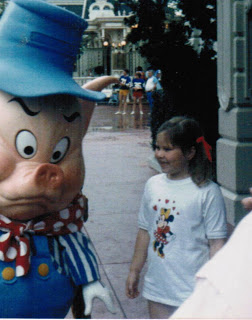 Look at that excited little face!  Not the pig –  Kristina.  The pig looks grumpy.. 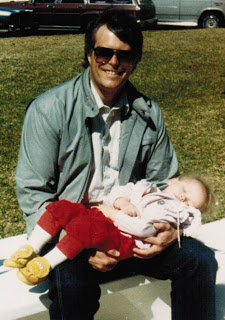 Bill with a tired little Kara.  I think she wore herself out with fun.
After contestants were done cooking, we had a buffet lunch and headed back to the Magic Kingdom for a short time before getting ready for dinner, which was a cruise and dinner to Pioneer Hall.  It was wonderful to have the cooking done, and now we could all just relax and have fun before the big day to follow.  The next morning, we had to report at 6:45 for a contestants-only breakfast.  We were told what to expect at the telecast and had assigned seating.  I was at the front table right in the middle, which rumor had it, was a good table to be – unless that is, your back was to the camera, which supposedly meant you were doomed!  Okay, so I was doomed.  But oddly enough, I was okay with that, because it meant I could try and come back for a second time, and that thought gave me a renewed enthusiasm because there was nothing I wanted more than to have this amazing experience again.  Once you are lucky enough to be a contestant, the joy never ends and it stays with you – which is why I am writing these blogs 25 years later.  I have been and always will be, a proud Bake-Off  person. 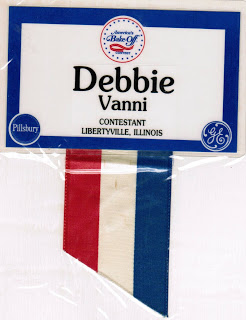 -Italian Cheese Rustica Pie, from Gloria Bove of Bethlehem, Pennsylvania
-Enchilada-Style Chicken Pie, from Nancy Jo Mathison of Chico, California
-Chocolate Silk Pecan Pie, from Leonard Thompson of San Jose, California (this pie is so good- I thought it could win! It’s featured on the cover of the Bake-Off book)
-Italian Biscuit Flat Bread, from Edith Shulman of Grapevine, Texas

Clementine Paddleford: An American Original and First Traveling Food Writer
Since the Bake-Off Blog From Yesterday…