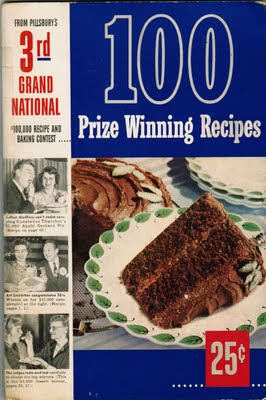 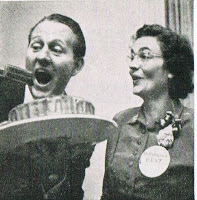 ﻿Art Linkletter, host of Pillsbury’s 3rd Grand National contest in 1951, is taking a big bite of  “Starlight Double-Delight Cake.”  Mrs. Samuel P. (Helen) Weston of La Jolla, California, won the $25,000 grand prize for her winning recipe, which was announced by Margaret Truman at the awards luncheon. The contest was held in the Starlight Roof of the Waldorf Astoria Hotel in New York City, hence the cake title.  So far, Pillsbury seems to like recipes with something new or innovative in baking.  In the first Grand National contest, yeast dough was immersed in a water bath to rise, the 2nd Grand National used a whole orange ground up and mixed into a cake, and as this book states, Mrs. Weston’s cake is a “brand new idea in cake-making.”  In preparing the cake, Mrs. Weston first made a rich, chocolate cream cheese frosting, saved half of it for frosting the cake, and put the other half into the cake batter.  Pillsbury says this “saves making frosting after the cake is cool – it’s all ready.”  The cake is lovely, with a subtle mint flavor from mint extract.  I also found that it tastes even better with a scoop of mint chocolate chip ice cream! 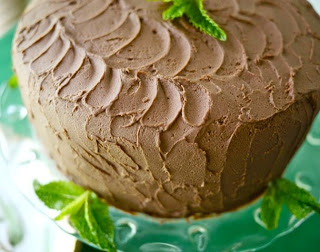 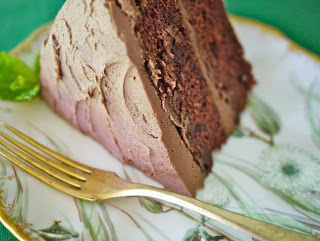 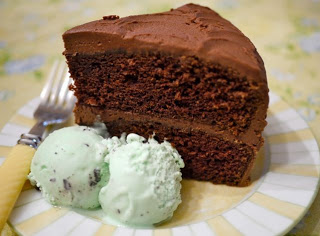 In keeping with the spirit of the contest, I made the cake layers using my mom’s old cake pans from the ’50’s, which certainly look their age, but still bake a great cake. 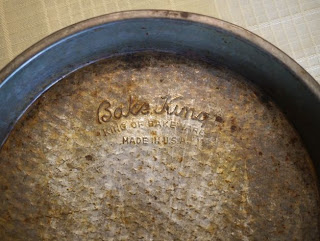 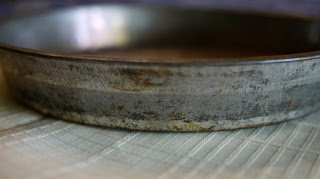 This 3rd Grand National Contest not only gave us the delicious winning mint cake, but another recipe which won $1,000 and became a recipe legend- and something I’m sure all of you will recognize.  Many years ago, there was a restaurant chain called “Poppin’ Fresh Pies” owned by Pillsbury.  Later the name changed to “Baker’s Square.”  On both menus, the most popular pie served was the “French Silk Pie.”  Not many realize that the famous pie originated from a Bake-Off recipe!

A slice of French Silk Pie from Baker’s Square 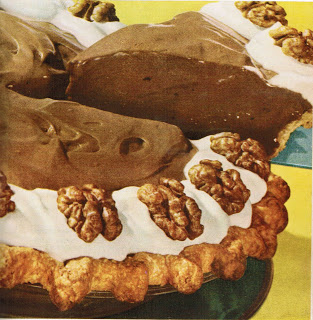 … And a slice of the “French Silk Chocolate Pie” from the book!
The French Silk Pie is not the only famous recipe to come from the Bake-Off.  There are others you will recognize as the blogs continue each Wednesday!
Here are the other prize-winning recipes from the 3rd Grand National Contest:
-$10,000 Chocolate Marble Bars, from Mrs. William Sawdo of Sturgeon Bay, Wisconsin
-$4,000 Plantation Peach Shortcake from Mrs. B.J. O’Donell of Elkhorn, Wisconsin
-$1,000 Gold Rush Cake from Mrs. Vava M. Blackburn of Walla Walla, Washington
-$1,000 Apple Dapple Pudding from Mrs. Norman Prince of Milwaukee, Wisconsin
-$1,000 Beauty Bow Rolls from Mrs. Donald J. Gillian of Tonawanda, New York
-$1,000 Shanghai Casserole from Mrs. Henry T. Vaughan of Youngstown, Ohio
-$1,000 Chocolate Peek-a-Boos from Mrs. Frank M. Ramsey of Philadelphia, Pennsylvania
-$1,000 French Silk Chocolate Pie from Mrs. K.E. Cooper of Silver Springs, Maryland
Junior Contest Winners:
-$5,000 Apple Orchard Pie from Constance Thatcher of Charleston, South Carolina
-$3,000 Hot Ziggities from Jack Meili from Minneapolis, Minnesota
Go to this link for a photo from the Truman Library about Jack’s Hot Ziggities recipe: http://su.pr/2LUH0t
-$1,000 Orange Glory Rolls from Mrs. Patrick Sullivan of Lawrence Kansas

To read the blogs from previous posts:

He Golfs! He Cooks! It’s "The Great White Shark!"
I’ve Been Missing You All!