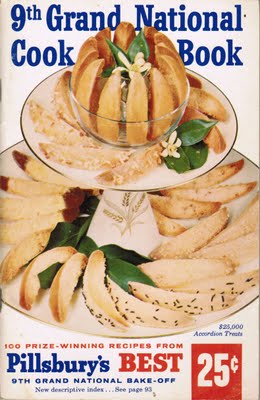 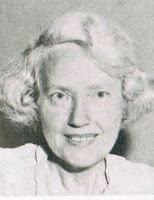 The winner, Mrs. Gerda Roderer
After all the casserole recipes from the previous Bake-Off #8, this next winner from the 9th Bake-Off has a French flair.  The grand prize winner, Mrs. Gerda Roderer of Berkeley, California was from Alsace-Lorraine before she moved to our country only four short years before the Bake-Off.  I wonder if all her friends and family back in France had even heard of the Bake-Off?  But it’s probably safe to say they were very proud of her accomplishment, and happy that a fancy French cookie would triumph in the land of ’50’s casseroles!  Mrs. Roderer brought this family recipe with her, and said she would use her prize money to further her son’s education, buy a car, and pursue art as a career.  I think she had a good start already, as these lovely cookies are a little piece of art in themselves.
Mrs. Roderer’s unique way of baking cookies probably intrigued the judges.  I have found in these early Bake-Off’s that they seemed to always be on the look-out for something a little different to offer the American home cook.  This cookie is definitely baked in a very unique process. 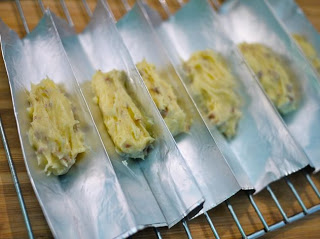 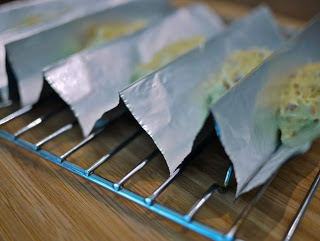 To start the cookies, pieces of aluminum foil are pleated into equal-sized accordion folds to hold the dough.  The sheets of foil and dough are then placed on cookie sheets and baked.  The cookies elongate as they bake into a beautiful cookie wedge. 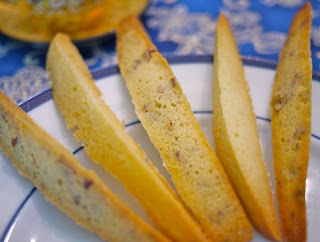 The cookies could be sprinkled in chocolate shot, with sesame seeds, coconut, caraway seed, or anise seed; or extracts such as rum, orange, lemon or almond could be used in place of vanilla; or the tips could be dipped in melted chocolate.  The delicious cookies are versatile, different, and fun to make.

But no matter how tasty and lovely the Accordion Treats  may be, it turns out this year of 1957 become a legend not for those cookies, but for some that did not win anything. Nada.  And they are a cookie-cult classic that every one knows.  Behold, the “Peanut Blossoms.” 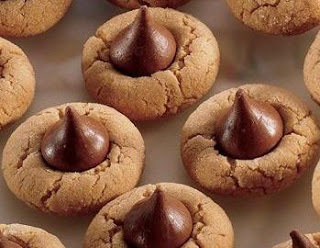 It would be safe to say that most everyone knows this cookie.  They have been prepared in millions and millions of kitchens since 1957 and shown up at bake sales, parties, and reunions all over the country – and still are.  It was probably one of the most unbelievable oversights by Bake-Off judges in the history of the contest.  This classic was invented by Mrs. Chester (Freda) Smith of Gibsonburg, Ohio.  Freda had a daughter, JoAnne, who in 1965 was selected to make a television commercial for Pillsbury flour featuring her mother’s famous cookie.  Later, in 1999, the cookie was officially entered into the Pillsbury Hall of Fame.

This Bake-Off not only produced a famous cookie, but also a famous beloved cookbook author, Beatrice Ojakangas of Duluth, Minnesota.  Before Beatrice, there were no cookbooks specifically on Finnish cuisine.  Her recipe, “Chunk ‘O Cheese Bread” was based on an old Finnish rye bread recipe, and won the 2nd Grand Prize of $5,000.  Beatrice went on to write twenty-seven cookbooks, some winning James Beard Awards.  She was also a food editor at Sunset Magazine, owned a popular restaurant in Duluth, has developed recipes for Pillsbury, Louis Kemp Foods, Jeno’s, and Chun King,  where she developed the company’s best-selling “Pizza Rolls.”  On reruns of Julia Child’s television shows, you can still view the ones where she cooked with Beatrice. 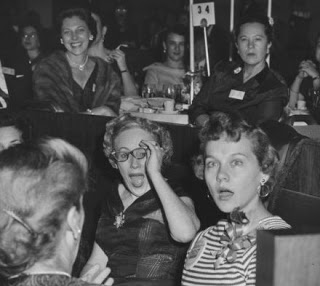 Beatrice (in striped shirt) at her winning moment
I had the joy and honor of meeting Beatrice when my daughter Kristina was competing for her 2nd time at the Bake-Off.  I was walking down a hallway when a woman suddenly stopped me as she read my name tag and said, “You’re a Finn, aren’t you? – Or at least your husband is!”   I was beyond excited to have a lively conversation with Beatrice about Finnish food.  I didn’t want it to end.  Beatrice is a lovely, sweet woman.  Not to mention she stole my heart with her massive cookbook collection! Oh, if my basement of cookbooks could have shelves like this! 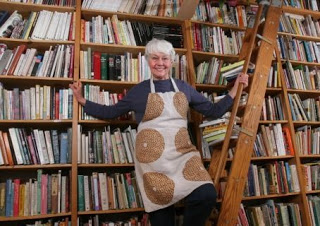 I actually took a magnifying glass to read some of the cookbook titles – and we have a lot of the same books!  I am guessing that is a Marimekko apron Beatrice is wearing, which is Finnish of course.  It looks like cookies, or maybe a loaf of Finnish round rye bread.  Beatrice says she will never stop writing cookbooks.  Aren’t we all so lucky?

Other winning recipes in this Bake-Off:

To read my previous Bake-Off blogs:

For the Accordion Treats recipe:  http://su.pr/2sjx9p

For the Peanut Blossom recipe:  http://su.pr/2nH6HC

ZAP! Power Outage in The Culinary Cellar!
My Power is Back On!! Time for a Good Cookie..