What I Did for Lidia

Do you ever have one of those days where everything goes wrong, but then somehow you end up laughing about it all?  Yesterday was one of those days.  I clipped out a small section of the Wednesday paper that said Lidia Bastianich was going to be at one of our brand new upscale grocery stores, Mariano’s, on Thursday.  I set it aside thinking I wanted to go, but wasn’t sure if I could.  When I got up in the morning, I still wasn’t sure, but my daughter Kristina called and kept telling me I should go, and my fellow cookbook collector friend, Madonna from Indiana, told me in an email that I should go.  Later, I was in the kitchen making something and flipped on the television.  I walked away and suddenly heard – “Hello – I am Lidia Bastianich.”  There was Lidia on PBS just starting a cooking show.  Well, that was a sign, so I decided to go.  I went upstairs to get ready and found that my bathroom sink was clogged.  I told my husband  Bill about the sink as he was going out the door to get the mail.  He came back in and told me my car had a flat tire. Great.  Bill got the tire fixed and I finally left for Mariano’s to find Lidia, even though it was in the 30’s and freezing.  I realized I forgot my gloves about halfway there.  I should have known it would be downhill from there. 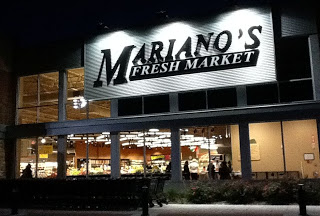 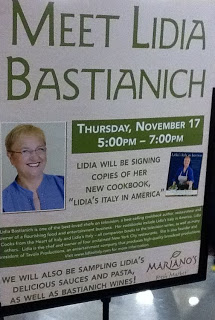 This was the sign upon entering the store, along with the table of books and Lidia’s line of pasta sauce.  I  followed the signs to Lidia at the rear of the store. 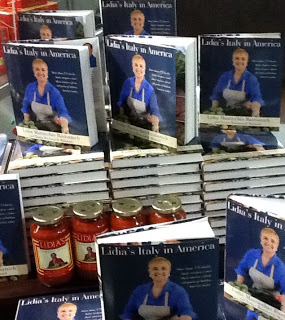 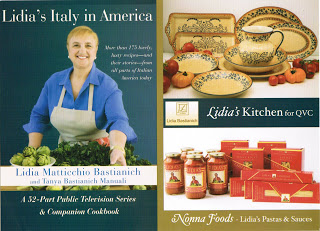 I paid for the lovely book, which included the above insert about Lidia’s cookbook, table ware, pasta, and pasta sauces.  Everyone had to write their names on a post-it note and have it on the right page where Lidia signed the books.  Everyone was taking pictures.  Lidia was very gracious – and she has a beautiful smile. 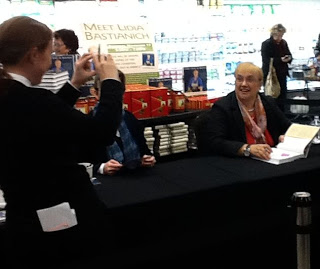 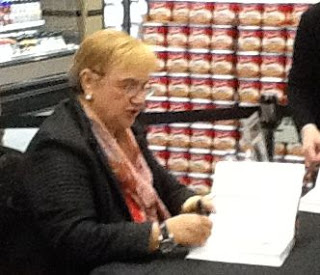 So after Lidia signed my book, I happily walked back to the car but wishing I had my gloves because I had to park way in the back.  I got in the car, shivering, and turned on the button for the seat cushion to heat up when I started the car.  Except the car wouldn’t start.  It made funny noises, then nothing.  Just a picture of a battery blinking.  Great.  I called Bill and he was in the middle of fixing my clogged sink and proceeded to tell me that I had too much hair because he pulled out endless long strings of it.  He said he would be right there, which meant about 10-15 minutes.  Bill said to try and save a parking space in front of my car so he could use the jumper cables.  Someone left next to me, so I grabbed that space just in case the person in front of me was in line for Lidia and wouldn’t be back.  I used grocery carts to save the space.  Apparently, that rubs some people the wrong way, because I got lots of dirty looks from people who wanted the space.  A man walked up to car on the other side and said – “You got trouble with your car?”  I wanted to say – No!  I love standing in the freezing cold with no gloves!  He asked me what happened and I told him it was the battery.  “You sure it’s not the electrical system?  Because if it is, you’re in for an expensive mess!”  Gee, thanks. ..
Bill finally made it.  When he got out of the car, he said there was more bad news.  After I called, he got in his car – and his wouldn’t start either.  Battery again.  Now we have a third car, which is the one Bill uses only for his really dirty jobs like when he inspects and climbs around filthy steel mills. (He’s an engineer).  Thank goodness that car started.  But he wasn’t done with bad news yet.  It seems when he was fixing my sink, he broke my vanity chair that I sit on to put on make-up and do my hair.  One that I’ve had for over twenty years.  Bill got the car started, turned to me and said – “Tell me I’m your knight in shining armor!” Okay – sweetheart – yes you are.  Now let’s just go home because I’m freezing.  Back home I start making dinner, and while it was simmering, I went upstairs to change into relaxing clothes.  I sat down to take off my contact lenses, except there was no chair.  I sat on air and landed on my behind.  Wouldn’t you think after Bill just told me the chair broke I would have remembered.  Just habit after having that chair for decades.  As I got up from the floor, I got a cramp in my leg.  Okay, what’s left to go wrong? Turns out, there was nothing left, except my leg cramp still hurt.
I decided it was time to put my feet up and finally look at Lidia’s beautiful cookbook.  Lidia and her daughter Tanya took road trips across America in search of Italian-American cooking and traditions.  They went coast-to-coast and visited Italian-American communities and families who had created something new out of the recipes passed down from their ancestors.  What they found was wonderful recipes with a new style yet still honored the traditions of their homeland, such as using Sicilian-style semolina bread and olives in New Orleans muffuletta sandwiches; or Neapolitan crusts in New York pizza.  The book pays homage to the importance and the role food played in the adaptation of the Italian immigrants in America.  The Italian way of life has left its mark on America and is an integral part of society today.  You will find recipes for antipasti, zuppa, sandwiches, pizza, salads, pasta, seafood, meats, vegetables, and desserts, all given with their Italian and American names.  You will meet fascinating Italian Americans and their stories, all willing to share their lives and recipes with us.  It is truly a fabulous cookbook.
I woke up with no car yet, no vanity bathroom seat, and a shade of that leg cramp, but I have an unclogged sink and Lidia’s book.  See – I told you it ended well. 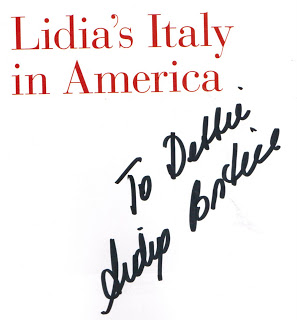 3 Responses to What I Did for Lidia