A Barrel of Fun 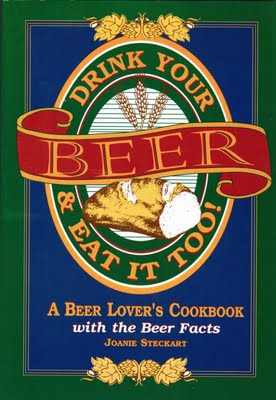 There’s nothing quite like beer – such as the earthy tang of the hops as the brew goes down, or the refreshing, subtle aftertaste.  A cold glass of amber topped with a creamy ivory crown is something rich and rare. Or so I’ve heard…  I don’t like beer except to cook with it.  When I saw this book at my favorite monthly library book sale, I knew I had to buy it since I hardly ever see beer cookbooks.  I don’t know why that is, because I think beer adds a flavor to some foods like nothing else can.
Beer has been around as long as man has.  Apparently Noah  carried beer on the ark; Egyptians made it from barley, Babylonians made it from wheat, and Incas made it from corn.  And one of our pilgrim fathers wrote in a journal entry dated December 19, 1620,  that the Mayflower had to come in ahead of schedule because “our victuals are being much spent, particularly our beere.” Today, centuries after the Mayflower ran out of it, beer still forms a good part of our diet as we drink billions of gallons each year.  Those who love it claim it’s the perfect thirst-quencher any time of year, it’s affordable, and has a pungent, palate-clearing taste that’s a friendly accompaniment to a host of foods.  What’s better with a spread of cold cuts, pickles, and rye bread than big mugs of beer?  And what’s called for when you’re enjoying any of those hearty German favorites such as sauerbraten, red cabbage, and potato pancakes.  When you’re piling sauerkraut atop a hot dog at a baseball game, there’s no question as to just what you’ll be washing everything down with.  Okay, I get it.  But still all I want to do is cook with it.

This cookbook has recipes ranging from appetizers to desserts.  The appetizers are ones we all know best like beer-cheese spread, fondue, beer-batter coated onion rings, or little meatballs in a barbecue-beer sauce.  I love the bread chapter – beer dinner rolls, beer-mustard bread, Swedish rye-beer bread, and my favorite, beer croutons.  The salads and sides chapters have a lot of bean recipes, along with beer-cheese sauce for vegetables, and a great recipe for potato pancakes.  For main dish meals, there is of course, beef stew and chili;  Wisconsin cheese soup, Welsh rarebit, beer-battered fish and chips, fried chicken, and pork recipes galore.  The desserts are highly interesting – beer fudge, beer sorbet, beer cheesecake, peanut butter and beer cake, and a lemon meringue pie with 3 cups of beer in the filling!

No matter how you like your beer, this cookbook is filled with over 100 beer facts you can tell your friends after a few, beer history, and of course the recipes, many of which I will be trying this summer.  My husband should get prepared for losing a few bottles here and there.  Cheers.

(Here’s a hint for summer:  It is said that a combination of beer and dish soap in an open pan will discourage wasps from forming nests in your backyard!)

Drink your Beer and Eat it Too, Joanie Steckart

Wednesday Winner: (Grand National) Bake-Off # 5: "My Inspiration" Cake
A Dad, a Pair of Tongs, and Heat