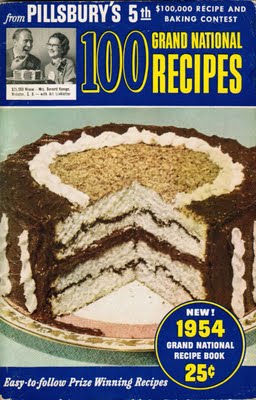 There are layers and layers of goodness in this Bake-Off winning cake from the 5th Grand National Contest held in 1953 at the Waldorf Astoria Hotel in New York City.  The $25,000 winner, Mrs. Bernard (Lois) Kanago, of Webster, South Dakota looked like she was about to faint when her name was called as the grand prize winner! 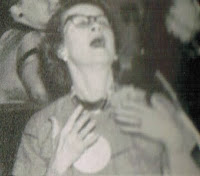 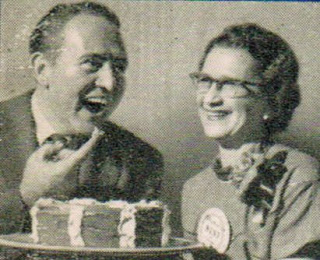 Lois with Art Linkletter after the awards ceremony!
Lois called her winning recipe “My Inspiration Cake.”  She certainly did something inspirational that I never would have thought to do.  When making the layers of the cake, she sprinkled grated chocolate onto part of the batter, then covered with more batter.  I would never have guessed the chocolate would keep its shape.  Since it was simply grated, I thought it might just meld into the layers while baking, but it produced a lovely, delicate thin layer of chocolate. 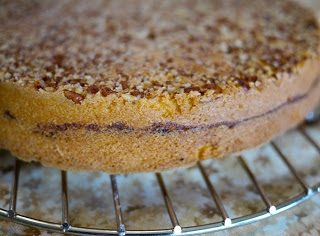 Also notice the layer of nuts, which were placed in the pan bottom before baking.  When the layers were baked and turned out, the nut layer was perfect and beautiful.  One reason why I think the nuts were perfect is because I still use my mother’s old hand-cranked nut grinder.  Of course, the nuts could be chopped with a knife, but there is something about these old grinders that makes them perfectly uniform and just the right size for something like this cake top.  I use mine all the time. 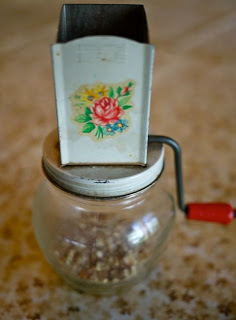 After the cake is cooled, there is another layer of chocolate icing in the center, then the entire cake is frosted, and decorated further with a bit of white icing.  The cake was a lot of work, but very pretty and worth it!  While I was preparing the various stages of the cake, I joked with my daughter Kristina saying that I should call it “My Perspiration” Cake!  As you can see, it’s very lovely and worth the effort. 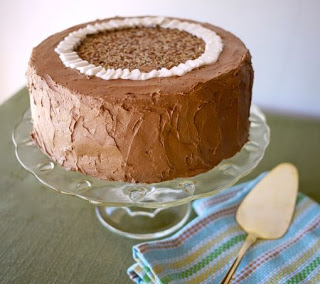 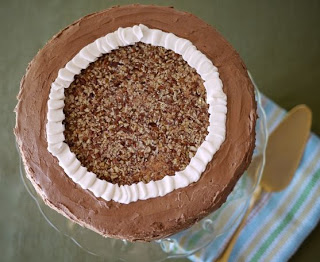 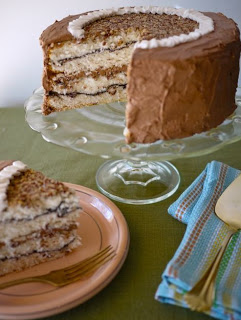 The cake was even used for a wedding cake.  I found an article from the “Recipe Finder” section of the Baltimore Sun back in July of 2004.  It told the story of a woman who said she was looking for the cake called “My Inspiration Cake” that won a contest back in 1953.  Turns out that Kathy Schnabel of Glendora, California, responded to the reader with the original recipe, not only because the day before she had found the Bake-Off book in a used book store, but Lois Kanago, the winner, was her mother-in-law’s aunt!  Kathy said that the cake was made for her wedding in 1983.  Her husband would bake the cake when they were dating.  It was with awe and amusement that Kathy’s mother had found the recipe request, which originally was in the Salem, Oregon Statesman Journal while they just happened to be visiting for Christmas.  My goodness, these Bake-Off recipes get around, and certainly last the test of time!
Another popular $2,000 winning recipe from this contest was “Blueberry Boy Bait,” won by a teen from Chicago.  I was tickled to see this recipe, as I remembered when I first heard about it.  Before my husband Bill and I were married, he took me to meet his Finnish relatives in Upper Michigan.  He mentioned to his relatives how much I loved cooking.  When we went to the home of Bill’s Uncle Matt and Aunt Fern, Uncle Matt couldn’t wait to tell me about one of his favorite recipes.  He handed me a recipe card titled “Blueberry Boy Bait.”  Little did I know back then that this was a Bake-Off recipe.  Blueberries grow wild in Upper Michigan, and this recipe quickly became a favorite in the Vanni household.
Here are the other prize winners from Bake-Off # 5:
-$7,500 winner Cinnamon Nut Crisps by Mrs. Joseph Terrill from Burlingame, Kansas
-$2,500 winner Coconut Islands by Sister Maria Jose Cannon from Honolulu, Hawaii
-$1,000 winner Prune Whip Spice Cake by Mrs. Harold Johnston from Homer City, Pennsylvania
-$1,000 winner Southern Pecan Bars by Mrs. Kenneth Pope from Aberdeen, South Dakota
-$1,000 winner Crabmeat Cobbler by Mrs. G. Harold Kirk from Bar Harbor, Maine
-$1,000 winner Lemon Cheese Pie by Mrs. Lyle W. Glenn from Fresno, California
-$3,000 Junior winner Marbapple Ginger Cake by Joanne L. Littley from Bluff Point, New York
-$2,000 Junior winner Blueberry Boy-Bait by Renny Powell from Chicago, Illinois

To read more about the Pillsbury Bake-Off contest, go to http://www.bakeoff.com/
To find the recipe for “My Inspiration Cake” go to:  http://su.pr/8RD0yI
To read my previous Bake-Off blogs, go to :
Bake-Off #1: http://su.pr/7gmylO

Shore Food at its Best
A Barrel of Fun