Celebrity Reflections Cruise: Great Food and a Shower Over the Ocean 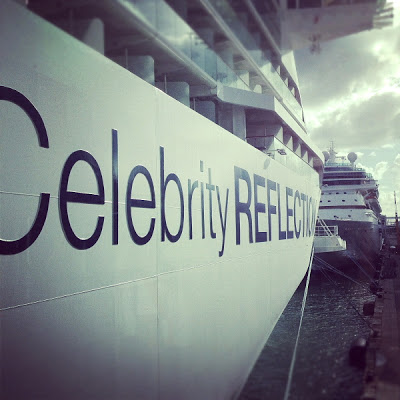 Life wasn’t too tough this past weekend.  My daughter Kristina and I were honored to be on the inaugural cruise of the fabulous new Celebrity Reflection.  And what a ship it is!  If you are planning a cruise, this is the ship you want.  Our cruise was a weekend event, leaving from Miami and sailing down to the Florida Keys and back.  It was a short cruise, but filled with endless fun. 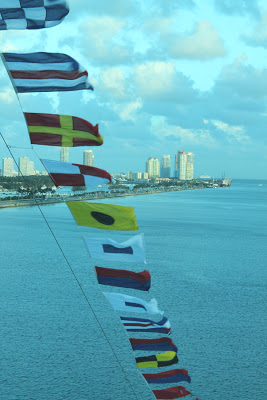 We said good-bye to Miami and immediately got dressed for our first amazing meal at the Tuscan Grille, one of the specialty dining restaurants.  We were seated with the Director of Public Relations with Celebrity Cruises, along with a writer from USA Today where we enjoyed lively conversation and delicious food. 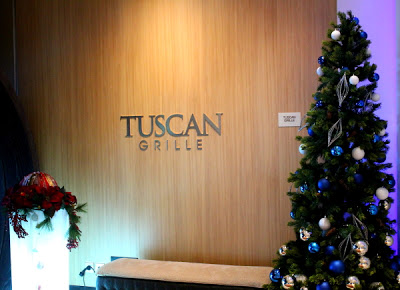 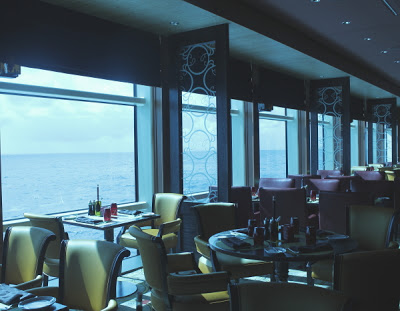 We couldn’t wait to explore the beautiful ship, and of course, had to find the library first! 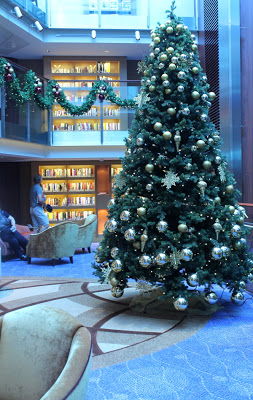 The library is stunning, and as you can see, all decked out for Christmas, as is the rest of the ship. 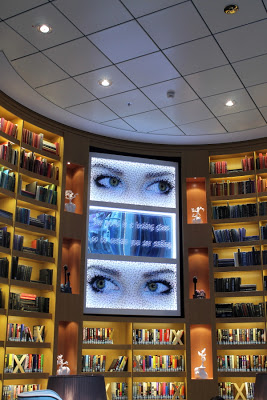 Kristina found the comfy chair in the solarium: 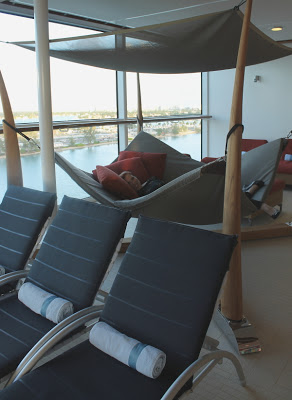 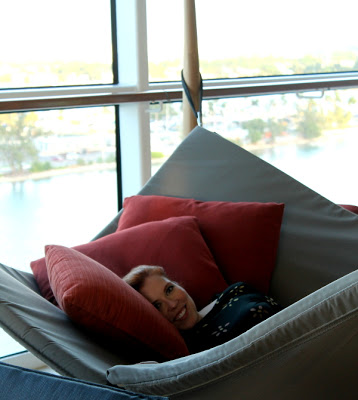 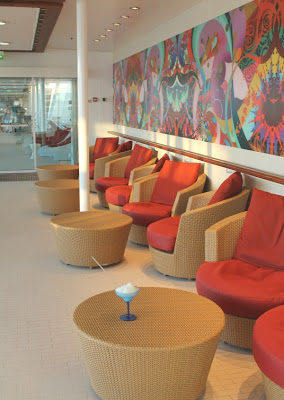 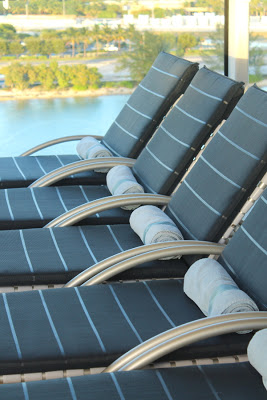 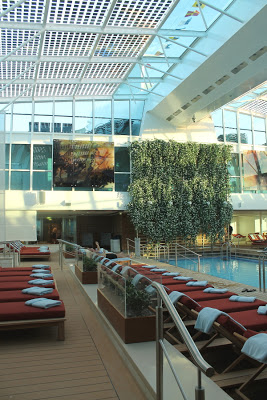 Everything was pristine and comfortable, not to mention filled with a variety of interesting artwork: 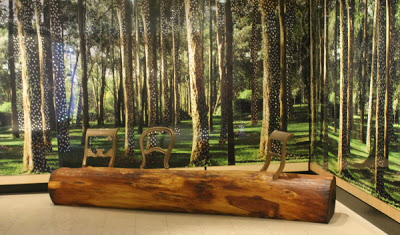 Our favorite was a log with the backing of chairs inserted into it.  I want to make this! 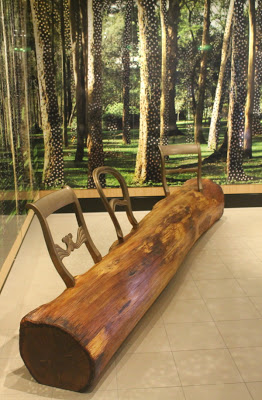 However, nothing beats Celebrity’s newest jaw-dropping feature, the “Reflection Suite.”  This breath-taking guest room is over 1600 square feet, accommodates six guests, floor-to-ceiling veranda doors and windows, a dining table that seats ten along with your own butler, a sea view from the bathroom, and needs a special key to access the very private area.  And good thing it’s private.  The piece de resistance is a stunning shower that juts out over the ocean.  The glass is see-through if you want it to be, as no one will see you but the dolphins, but if you are feeling more discreet, the glass can instantly go from transparent to translucent at the touch of a button.  Kristina couldn’t wait to step into it, and declared it the best shower ever.  It’s even bigger than it looks.  You could fit all six guests in there at once.  But that might scare the dolphins… or the butler… 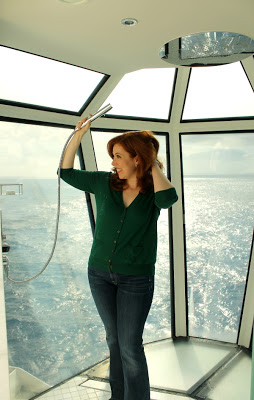 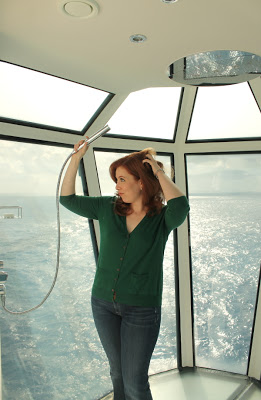 The night was far from over.  We had to check out “The Molecular Bar” featuring the “Liquid Chef” himself, Junior Merino.  Don’t let his darling dimples and bright smile fool you – this man can make the most incredible drinks you will ever have, and they all look like works of art.  Junior has created signature cocktails for dozens of restaurants and bars around the world, and was inducted into the 2007 Bartender Hall of Fame. 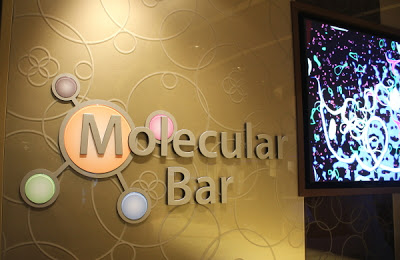 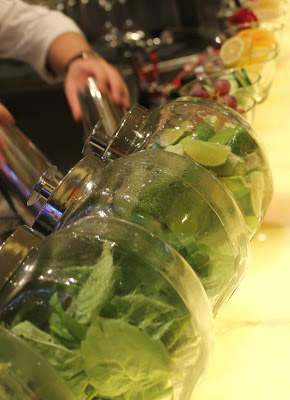 I opted for the “Coming Up Roses” cocktail just because it was so beautiful.  It was originally created for Oprah Winfrey’s Broadway hit, “The Color Purple,” and won best cocktail of the year for two years from New York Magazine. 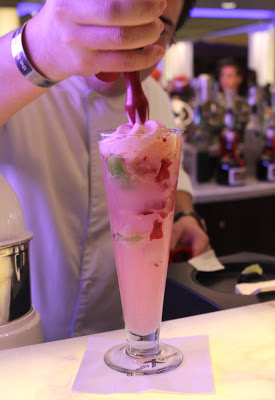 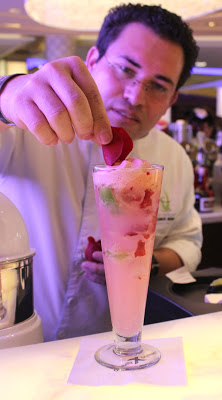 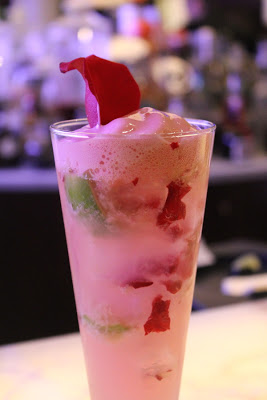 Work of Art!
Kristina loves passion fruit and selected “The 20 Year Martini,” Junior’s creation in celebration of his 20 year anniversary, and includes a passion fruit-ginger foam on top with a sage leaf for a final touch. 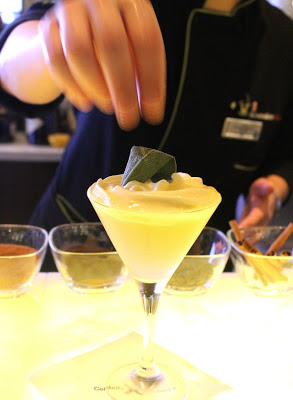 The cocktail that always had people running for their cameras was the “Dragonfly,” which has to be photographed quickly before the liquid nitrogen dissipates. 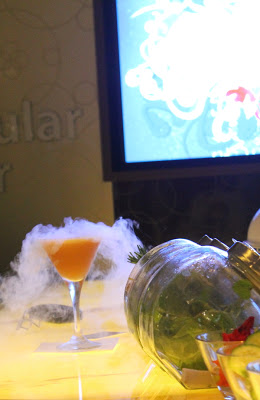 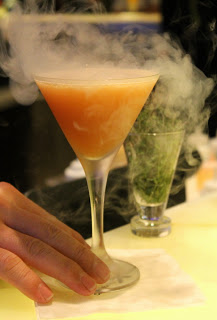 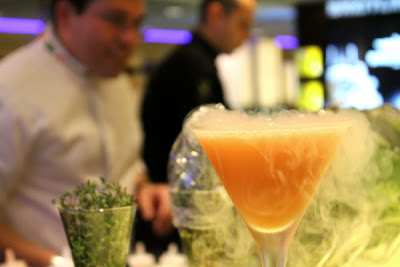 After the events of the first day, we were already looking forward to lunch the next day at “Blu,” our favorite of the specialty dining areas.  Before being served, there was a discussion about “The Evolution and Availability of High-End Cuisine,” featuring a distinguished panel of speakers- Scott Hocker from “Tasting Table,” Jeff McInnis from Top Chef and owner of Yardbird restaurant, Yvon Ros from the James Beard Foundation, Jacqueline Sainsbury from “Food Arts,” Scott Steenrod, the VP of Food and Beverage Operations at Celebrity Cruises, and our favorite chef who we first met on a cruise to Alaska, John Suley, the Director of Culinary Operations.  Suley and his team of corporate chefs had the honor of of being the first cruise line to cook dinner at the James Beard House in New York City.  Chef Suley and Scott Steenrod joined Kristina and me for lunch.  We had a marvelous time talking about the food industry and enjoyed a beautiful meal in the gorgeous surroundings of Blu. 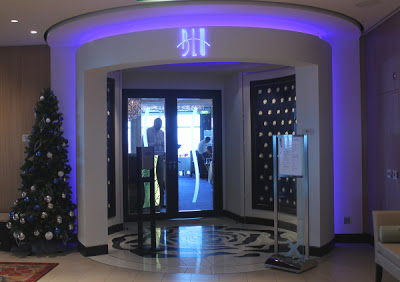 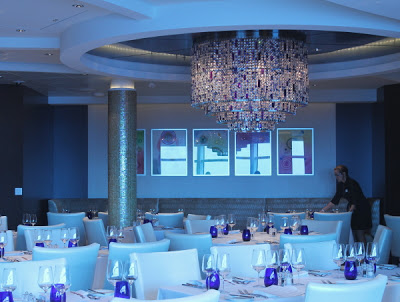 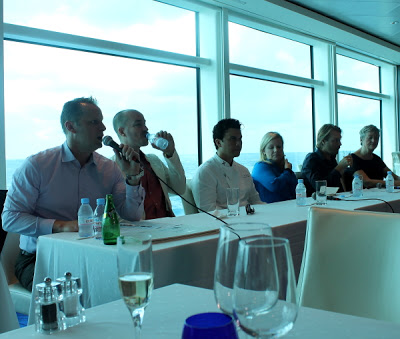 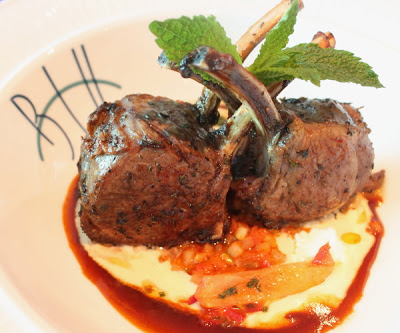 I had the lamb chops!
Anyone who has been on a cruise knows that a huge part of the experience is the food.  We just had lunch and were already anticipating dinner, which was going to be held at the beautiful “Lawn Club Grill,” with John Suley, Jeff McInnis, and their chefs preparing an amazing meal. 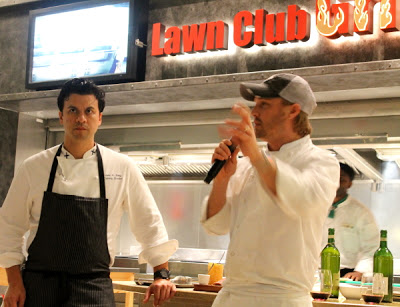 The meal from Jeff McInnis, executive chef from his restaurant Yardbird, brought his Southern flavors to our group.  We started with cornbread and buttermilk biscuits, a charcuterie board, flatbreads, and a salad.  It was followed by chargrilled chicken under a brick, a tomahawk rib eye, and shrimp ‘n grits.  The sides included sauteed Southern beans, and a to-die-for truffle mash of parsnip, celery root, and potato puree topped with shaved truffle pieces.  Dessert was a chocolate Mississippi mud pie, a beautifully layered strawberry shortcake, and waffles with a bourbon syrup, buttermilk ice cream, toasted pecans, and candied bacon.  Are we full yet??
After dinner, we decided to stroll around the stores on board, which included Bvlgari, and Kristina fell in love with a necklace that we could never afford unless we decided to go gamble in the casino and try to win the money for it.  Instead, we returned to our room to relax and pack before departure the next morning.
It’s always hard to leave such luxury and return to normal life, but we decided to start planning our Christmas menu while at the airport, and then get back home to start the decorating.  My plane to Chicago left first, then Kristina left a few hours later for Los Angeles.  I’ll see her again when she comes home for Christmas, but in the meantime, I’m sure we will both still be dreaming of the incredible shower over the ocean.
Thank you Celebrity.  Your ship is amazing.
Bon Voyage!!
The Cake Boss Cooks Italian

4 Responses to Celebrity Reflections Cruise: Great Food and a Shower Over the Ocean