There is no limit what the food industry will do to sell products.  Yes, I have watched HBO’s Game of Thrones from the beginning (closing my eyes very often), but I found it amusing to learn of Game of Thrones Oreo cookies.  Now that I was not expecting, but apparently people are so crazy for them in some areas of the country, they have become as elusive to find as Cabbage Patch Dolls or Tickle-Me-Elmo have been in the past.  I saw one bag of these specialty Oreos someone was trying to sell on eBay for $100?  Seriously?  My daughter found some at our local Target for a few dollars.  Since I write a culinary-related blog, I had to buy them.  I was hoping to see Jon Snow,  Brienne, or Tyrion on a cookie, but it turned out it was the Houses plus a White Walker instead. 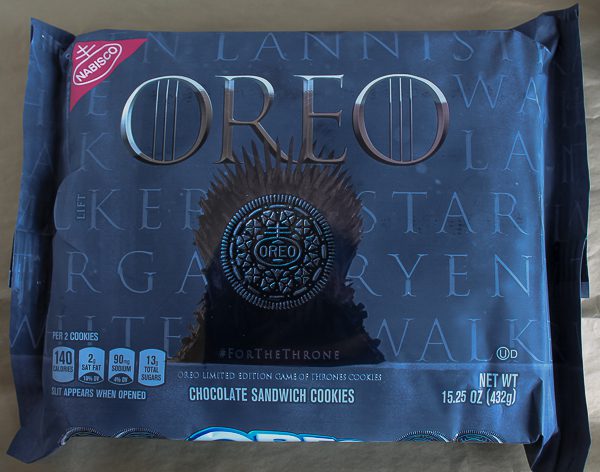 So here they are in case you haven’t seen them.  I had to make the package bluish so you could read it, but it’s actually black.

Photo on the back of the package.

Here are the cookies.  They taste like a regular Oreo, but depict White Walkers, House Lannister, House Targaryen, and House Stark. 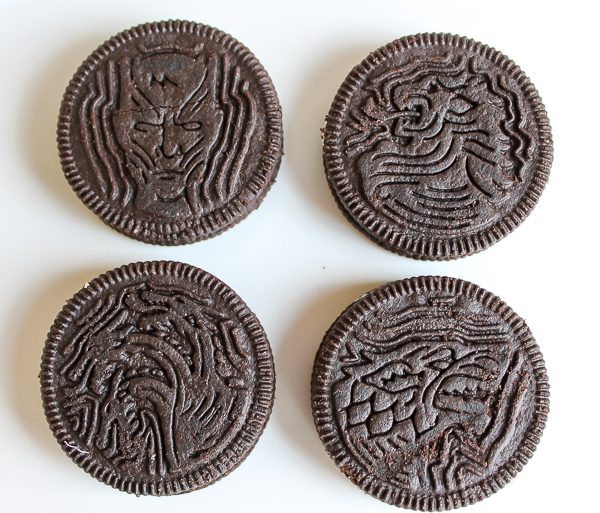 But not only are there Oreos, but also a Game of Thrones Barrel-Aged Imperial Stout! 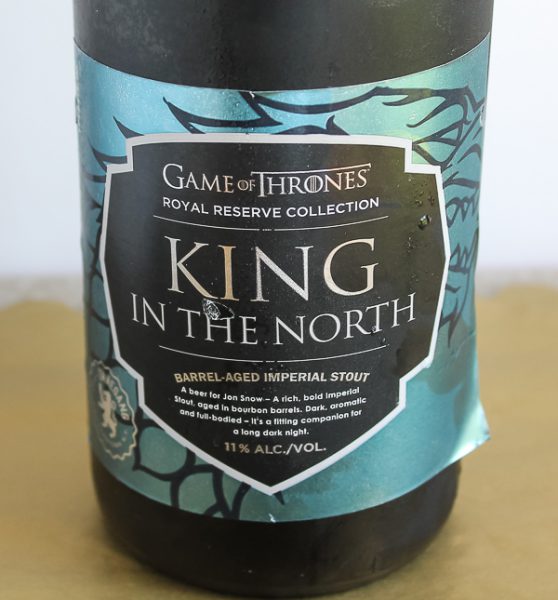 In case it’s too small to read, the label says:  “A beer for Jon Snow- a rich, bold Imperial Stout aged in bourbon barrels.  Dark, aromatic and full-bodied.  It’s a fitting companion for a long dark night..”

So not only do we know “Winter is Coming,” on Game of Thrones but it snowed in my hometown near Chicago. Again. Last night.  We’re way ahead of you, White Walkers.

Have a few cookies and some ale to face whatever happens on tonight’s episode.  I have a feeling it’s not going to be easy to stomach.  But as the evil queen Cersai Lannister said, “When you play the Game of Thrones, you live or you die. There is no middle ground.”

Tune in this evening to see what happens in the dark of the night.  Have some Oreos for comfort in case your favorite character dies.  It better not be Brienne.  I would need the whole package.

2 Responses to Game of Thrones Oreos