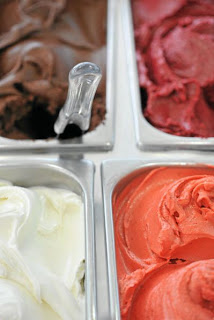 You may have heard of Hamburger University or Barbecue University, but did you know there is a Gelato University?  This unique school near Bologna, Italy teaches eager students from countries across the globe.  The school was founded by the Carpigiani gelato equipment manufacturer in 2001.  The institute offers more than 300 courses from September to July, attracting over 3,000 students, which is a 50% increase over the past several years.  The surge in popularity is indicative of a broader rise in gelato consumption worldwide.  Many are attracted to the fact that gelato contains less air and about 30% less butterfat than ice cream, which gives it a more intense flavor, and appeals to the increasing health-conscious population.  Most students are interested in learning more about a product that’s locally produced, but some are just looking for a back-up career during a recession.
In the lecture hall, taught by professors whose outfits consist of aprons and white gloves, students can boast to others that their curriculum consists of core subjects such as the art of perfecting lemon-cream, tiramisu-flavored, or pistachio gelato.  Students are schooled on such topics as the importance of butterfat-to-sugar ratios to make the velvety creaminess of a true gelato.  Italian gelato provides a greater flavor experience because there is less fat that coats the tongue, so there is more flavor per spoonful, and the taste buds are more alive since the temperature is not so cold as to dull sensitivity.  There are 18 gelato-making stations that churn and freeze the mixture of eggs, milk, dextrose, stabilizing agent, cream, and numerous flavors including papaya, pineapple, and coffee.  Over the course of the week-long, $1,000 course, students will make variations on over 20 flavors.
Gelato is produced fresh each day, in relatively small quantities, is sold directly to the public, and is available in almost limitless flavors, usually based on fresh ingredients that make it creamy, colorful, and healthier.  On the other hand, ice cream is made in large industrial batches, uses ingredients designed for lengthy storage, and has limited flavors.  Learning has rarely been so sweet; but here is the downfall.  Gelato may have less fat so it’s healthier.  But if you eat too much gelato, it will still make you fat.
Spoil sport.

Can you Beat These Recipes?
Year-Round Holiday Entertaining