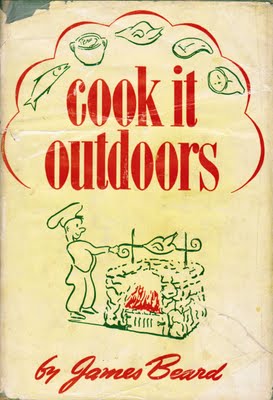 I love James Beard.  And old James Beard cookbooks.  This first edition from 1941 is a treasure.   Not only for the wonderful recipes but the highly amusing quotes.  The dust jacket says grilling is basically a man’s area of expertise, but that this book “will be invaluable to the woman who aims to please the masculine members of her household.”  Inside, James himself claims that “Primarily, outdoor cooking is man’s work and man-sized menus and portions should be the rule.”  Hate to break it to you my dear James, but we have two women is this household who have won grilling contests. More than once.  A lot has changed since the ’40’s and women are just as capable as men at starting a fire and cooking a mean steak.
When this book was written there were no fancy grills as we know them now, and most people built giant brick barbecues in their backyards.  The book even provides a blueprint for constructing your own, which should “face in the direction of the prevailing summer winds” and be built “staunchly.” 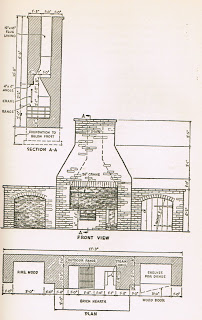 Aside from the dated quotes and blueprints, the food is still, of course, wonderful.  After all, it is James Beard.  The appealing part of the recipes is the simplicity.  No recipes have 25 ingredients with difficult to find spices.  Sometimes there is not much more than salt, pepper, mustard, and butter.  It’s the handling of the meat and the heat of the grill.  The book has recipes for all the basics including beef, pork, chicken, and lamb, along with easy side dishes to pair with the meat.  Not to forget some cocktails that will knock your socks off, and desserts, mostly fresh fruit-based.  It may be an old book, but it’s filled with treasures – with the magic touch of James Beard. 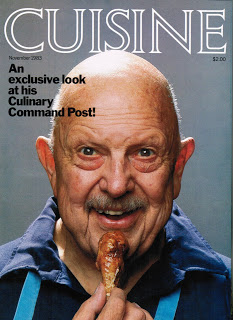 What a lovable face! 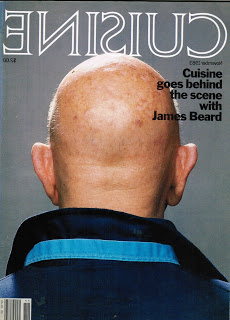 And head!
(My daughter, Kristina, and I are trying to decide which one of us gets to frame this original 1980’s cover of  the old Cuisine magazine. I think it should go to the one who grills the best steak.  What do you think??)
﻿