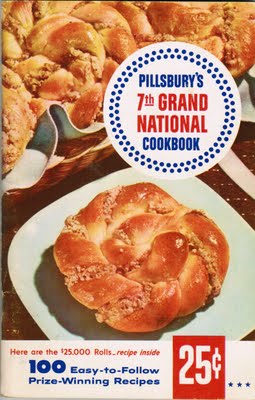 This was the seventh try at the Bake-Off for Mrs. Henry (Bertha) Jorgensen of Portland, Oregon, and her perseverance paid off in a grand way.  With the $25,000 prize, Bertha said it would guarantee her 18-year-old son’s college education, with the remainder to be spent for a new home.  Amazing what $25,000 would buy back in 1955!  Before microphones and television cameras, opera star Helen Traubel presented the prize to Bertha, who instantly went from being a babysitter to reaching national fame.  Besides cooking, Bertha also loved to raise flowers and Chihuahua puppies.  But contest winnings were not new to Bertha.  She loved entering other kinds of contests and had already won a car, a radio, and a war bond.  The Bake-Off contest was Bertha’s first trip to New York City, where she also was able to see two of her nephews, whom she hadn’t seen in 38 years! 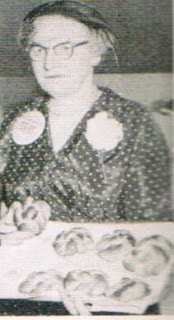 Bertha with her Ring-a-Lings!
Perhaps one of Bertha’s greatest thrills after the Bake-Off came soon after her win, when Oregon’s governor presented her a citation with the Oregon State Seal at a special dinner sponsored by the Oregon-Washington Filbert Growers.  Since Ring-a-Lings contain chopped filberts, the Filbert Growers welcomed her home with a large crowd of friends and family where she was met at the airport with large signs saying, “Welcome, Mrs. Jorgensen!” The company later sponsored trips for her around the country to talk about her winning recipe. 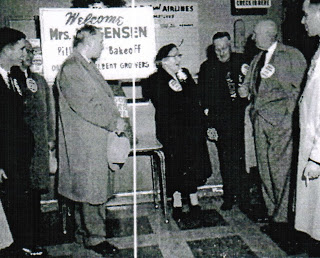 Bertha’s winning entry is an original roll recipe handed down by her mother. But Bertha wanted to use an Oregon product from her home state and decided to try it with filberts, which she thought added an unusual flavor not used by the general population at the time.  The nut-filled roll features a simple way to fill, cut, twist, and curl the dough so that the full flavor is tucked in every bite, and is topped with a fresh orange glaze.  The judges thought it demonstrated a simple way to produce an easy roll with a professional look. 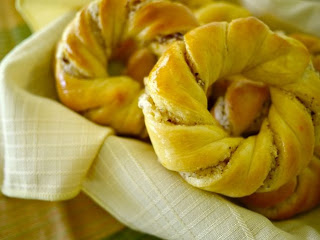 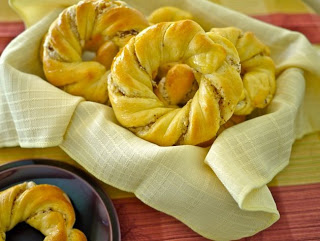 The tradition and joy of making Bertha’s Ring-a-Lings continues to this day.  In fact, a writer from the San Francisco Bay Area, Patricia Kline, writes about desserts and baking in her blog called — “ring-a-lings!”   Patricia grew up eating and enjoying her mother’s Ring-a-Lings.  Sadly, in later years, Patricia’s mother developed Alzheimer’s disease and could not remember making her beloved rolls.  Patricia was heartbroken because her mom had been such an accomplished baker, and the disease robbed her of yet another precious memory.  Patricia says the Ring-a-Lings were her mother’s claim-to-fame in the family and the star of all celebrations and gatherings.  Even though they are more of a breakfast treat, Patricia said the Ring-a-Lings also made it to the dessert table.  The original recipe which Patricia’s mother hand printed on a note card was incomplete, so Patricia decided to do some research at her local library.  It was there she discovered that the Ring-a-Lings had been a Pillsbury Bake-Off winner.  She was thrilled to be able to make her mother’s recipe and hand it down to her own daughter. 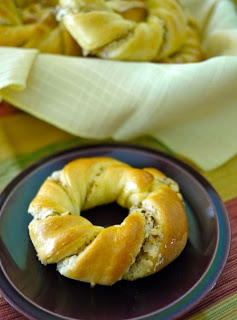 Here are some of the other winning recipes from Bake-Off # 7:

To read more about the Pillsbury Bake-Off go to:  http://www.bakeoff.com/
To find the Ring-a-Ling recipe go to:
http://su.pr/2de6TR

To read all my previous blogs of past Bake-Off’s: