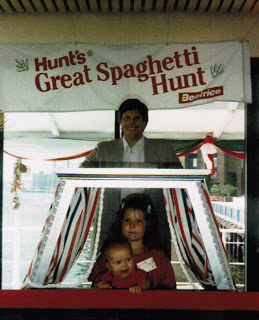 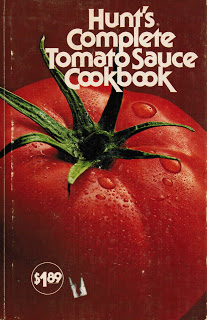 Back in 1985, Beatrice/Hunt-Wesson Foods sponsored a contest they called “Hunt’s Great Spaghetti Hunt.”  The contest was divided by regions of the country, and I was in the “Northern” area finals held in Chicago.  The winner of each region was then flown to New York City to compete for the grand prize, a trip to Italy!  There were 12 contestants in the contest, each selected by Hunt’s after submitted recipes were tested and reviewed.  When I arrived, I realized I was the only contestant not to use ground beef as the base of the spaghetti sauce.  Instead, I made up a Creole-style sauce using smoked sausage and shrimp.  I didn’t know whether being different would hurt me or help me.

As the twelve of us cooked and stirred in front of a large audience, a woman approached me and asked me the date of my birth.  I told her that my birthday just happened to be that very day.  She walked away with a smirk on her face.  I’ll tell you why later.  After we had all completed our sauces, it was time for the judges to taste.  The judges consisted of chefs, food writers, and restaurant owners, along with some odd choices for food judges, such as a   famous dress designer.  The judge who scared me the most was Rich Melman, the genius behind the Lettuce Entertain You restaurant chain.  When the judges were called up to taste each sauce one at a time, I keep thinking – Oh, please, don’t let Rich Melman taste mine first.  Of course, just as I was chanting this in my head, I looked up and he was right in front of me.  He didn’t say a word.  He just scooped up some sauce and walked away.  I was heartbroken and thought he hated it.  After an agonizing hour or so, it was time to announce the winner.  No one was more surprised than I was when I heard my name as the Northern Regional Winner.  Just as the emcee was finishing up, a woman walked up and asked to say something.  It was the woman who had asked me my date of birth, the well-known syndicated astrologer, Irene Hughes.  She took the microphone, looked at me and said, “I knew you were a Taurus and I knew you were going to win.  Taurus is the sign of food and money, and I predict you are going to make a lot of money in food.”

After the fanfare of winning, and feeling lucky to be a Taurus, Bill and I headed to New York City for the finals, along with our girls, Kristina and Kara, who were very young at the time, as you can see in the top photo.  The contest in New York was astounding, to say the least.  We were treated to a Broadway play, took the horse carriage ride through Central Park, and they put us up at the Sherry Netherland Hotel, home at the time of Danny Kaye, Diana Ross, and other celebrities.  We never saw them, probably because they lived up in the penthouses, but that didn’t matter.  Just being in such an incredible, very exclusive hotel was prize enough.

The finals were held at The Water Club restaurant.  As we entered, we were told that John Travolta was there having lunch.  Another great place for celebrity sightings!   I entered the cooking area with the four other finalists, each of us from a different part of the country.  It was the same set-up as the regionals.  However, the sauces were all very different, except for one.  There was a clam sauce, a Yugoslav sauce, my Creole-inspired, a spicy one with chili powder, and then one called simply “Italian Sausage Spaghetti Sauce.”   When the judges approached our cooking stations, it was immediately obvious who was the most vocal.  A very loud voice coming from a very small Italian woman, who was a speaker on Italian radio, tasted each sauce.  As she took a spoonful of each going down the line, she exclaimed, “This is NOT Italian!”  and “THIS is not Italian!”  I was next.  I knew my sauce was REALLY not Italian.  And she didn’t even have to say it was not Italian.  You should have seen her face.  The next and last for her to taste was the Italian sausage sauce.  She took a bite, smiled, and said, “Now THAT’S an Italian sauce!”  So I guess you know who won the trip to Italy.  The Italian sausage sauce was made by a lovely lady from Louisiana.  We actually became friends and shared recipes over the miles for many years.  The emcee of the final contest was actor Red Buttons.  No one knew why.  I don’t think he was Italian, so I guess he either loved spaghetti sauce or was friends with someone from Hunt’s.  Kara fell asleep at one of the dinners, and he came over to see her: 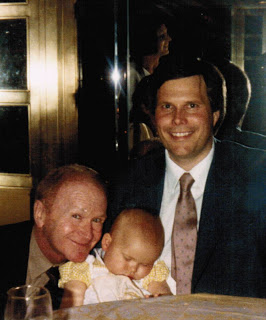 I found the “Hunt’s Complete Tomato Sauce Cookbook” from 1976 at a used book sale after the contest was over.  Of course, I had to buy it because now I am a lifelong fan of Hunt’s products.  It’s actually a very nice cookbook with some interesting chapters for not only Italian dishes, but also Mexican, budget-friendly, one dish meals, low-fat, regional USA dishes, and what they call “Hunt’s Remarkable 7 Sauces.”

Now I want to ask Irene Hughes something – Where is all this money you were talking about??  I need a new leather couch..