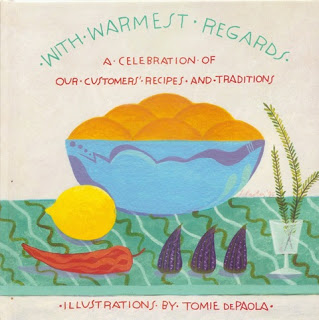 Marshall Field and Company had everything.  Unfortunately, after 152 years, the store as we knew it here in Chicago officially disappeared in September of 2006.  Despite protests, extensive media attention, and threatened boycotts of the replacement store, Field’s as we knew it ceased to exist.  By the early 1900’s, Field’s had become the largest wholesale and retail dry goods establishment in the world.  Field’s was the first store to offer a bridal registry, dining facilities, personal shopping assistants, and even escalators.   The Walnut Room was legendary.  I don’t think there is anyone in Chicago who had not dined there at one time or another in their lifetime.  The window displays at Christmas were a sight to behold.  I was mesmerized by them when I was a child, and then the fascination continued with my own children.  I miss everything about Field’s – but I do have one of their cookbooks from 1995.

Marshall Field, who died in 1906, always stood behind his products and had the best famous slogan:  “Give the lady what she wants.”  Too bad we can’t just have our old Field’s back.  (And I don’t care what they say; those Frango Mints they make now do NOT taste the same!)

2 Responses to I Miss Marshall Field’s