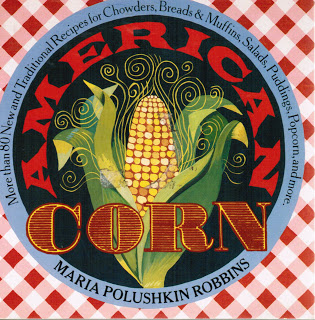 Being a Midwesterner, it would be strange if I didn’t love corn.  In fact, I spent a lot of time around this truly indigenous American grain.  Zea mays is the botanical name, maize is the Native American word, and corn is actually a generic European term for any sort of grain.  Call it what you wish, but corn has been a staple of human consumption for 5,000 years before the first Europeans set foot on this continent.  The Plymouth colonists learned to make several kinds of cornbread from the Native-Americans, including corn pone, hoecakes, and ashcakes where the corn was baked right on the ashes of a hearthfire.  Corn is one of the most important cash crops and sources of human nutrition in the world.

This tiny little paperback cookbook from 1989 is packed with more than 80 traditional and creative recipes including breads, muffins, chowders, salads, puddings, popcorn, and more, using fresh, dried, and ground corn.  You will also find sidebar facts and quotations about corn and the folklore that surrounds it.  I am looking forward to trying the polenta lasagne, some of the yummy-sounding butters to lather on hot corn-on-the-cob, and fried corn and potatoes with chipotle.

My first memory of corn was actually playing in it at a farm in Iowa.  My great-aunt Margery had some wonderful farm friends named Reggie and Mabel.  We all loved them so much, they became Uncle Reggie and Aunt Mabel.  When I was around seven or eight years old, I can remember waking up to the roosters crowing and smelling eggs, biscuits, bacon, and pancakes being prepared by Aunt Mabel downstairs.  I followed the aroma, eagerly devoured the breakfast, then followed Uncle Reggie to the barn where I helped him milk cows.  He even let me drive the tractor.  But then things would get busy and I would basically be on my own.  I found the silo and happily jumped in and out of the corn for long periods of time.  As I walked by the pigs, I noticed some brand new babies.  Of course, I wanted to play with them, climbed over the fence, and was promptly chased by mama pig.  The lure of the high corn growing in the field was too much to resist, so I decided to take a walk into the corn field, which turned out to be a huge mistake.  I became completely lost and disoriented, and had nightmares for days about never finding my way out.  I still don’t know how I found my way out, but my guess is, I followed the aroma of Aunt Mabel’s cooking.