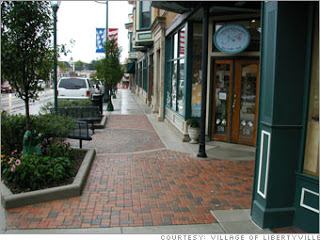 Here is a photo of my hometown, Libertyville, Illinois. If you walked straight ahead eventually you would come to the Liberty Theatre, where Marlon Brando was employed as an usher while still in high school. He was one of several famous people to come out of our small town, but most will say he was certainly the most flamboyant. Some of our other famous residents include Adlai Stevenson, 2-time Democratic Presidential Nominee and US Ambassador to the United Nations; Samuel Insull, founder of Commonwealth Edison, and David Adler, who was considered one of America’s premier “great house” architects. Although obviously not a resident, John F. Kennedy spoke in downtown Libertyville on a campaign stop. Libertyville is a friendly, progressive town and a great place to raise a family. Money magazine included Libertyville in the top 100 “Best Places to Live” in America.” Even though we only have about 21,000 residents, we are less than 40 miles from Chicago. We have the small town feel, but have the advantages of a big city right down the road.

Of course, along with good, there must be another kind of story. It is said that there is a haunted section in town, out in the woods, known locally as “The Gate.” Urban legend claims that an old orphanage was the site of several gruesome murders decades ago. The orphanage is long gone, but the gate entrance still stands, where some say, if you go late at night, you will see the ghosts of the murder victims, and possibly even hear a few screams. 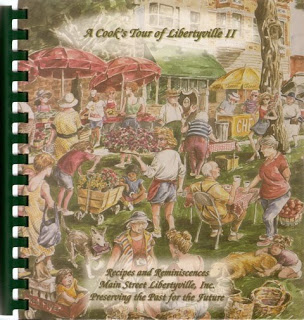 But that’s enough scary stuff. Here’s another great thing about Libertyville. This cookbook! Back in 2002, a group of us decided to come up with “A Cook’s Tour of Libertyville II.”  We wanted publish another cookbook to help raise money for the Mainstreet Libertyville Program. The purpose of the the Mainstreet program is to enhance the community identity, invest in the towns’ historic buildings, and develop activities and events for the entire community. We had a ball developing the cookbook. We met every few weeks for months, poured over recipes, and agonized over which ones to print. When the word went out for residents to offer their favorite recipes and memories, we were flooded with responses. People proudly sent in their family favorites, told us how long they had been residents, and wrote of special times of their lives in Libertyville. We received a recipe for a special pizza from a physician in Colorado whose brother was a longtime resident and had recently passed away. It was his way of honoring his “most ardent pizza fan.” People dug into grandma’s recipe file and contributed such wonderful recipes as Grandma Taylor’s Graham Cracker Cake; Grandma’s Apple Nut Squares; Grandma Dellutri’s Stuffed Shells with Sicilian Spaghetti Sauce, and Grama Panico’s Aglio e Olio with Broccoli and Shrimp. There is a whole chapter on recipes from favorite local restaurants, a chapter on wine pairings from a newly opened wine shop, and pages on theme parties.
We have a beautiful little town and a great cookbook, even if there is a haunted past somewhere out in the woods. However, if you pass by the Liberty Theatre where Marlon Brando got his first taste of the movie life, I swear you just might hear a ghostly voice saying “STELLAAAA!!” 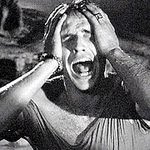 Food Fight! (without Belushi)
What Did Daniel Webster Eat?