What Did Daniel Webster Eat? 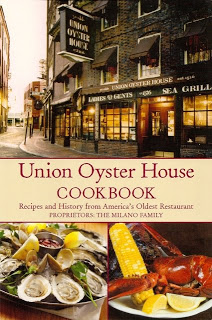 The Union Oyster House in Boston, Massachusetts is America’s oldest restaurant and a designated National Historic Landmark. Its doors have been open since 1826, and surprisingly, has only been owned and operated by four families. Many historic figures frequented the classic semicircular oyster bar that is still the heart of the building. The great orator Daniel Webster was almost a daily customer. He would still be right at home perched on a wooden stool at the soapstone bar, ordering his usual tumblers of brandy and water, and six or more plates of oysters at a sitting.

As you enter the front door you will be able to watch the shuckers behind the semicircular bar. One of the shuckers has been at the restaurant for over 35 years. As you sit at the bar, you will be served warm, house-made potato chips while watching the shuckers entertain. They will show you how to hold a lobster without getting pinched, or inform you which famous person sat right there on your stool. It could have been Ted Kennedy, Meryl Streep, or even Tiger Woods.

The recipes in the cookbook are amazing! Here’s is a sampling of just how the oysters are served: half shell, Rockefeller, scalloped, casino, stuffed, steamed, stew, and stuffing. This is not to mention the lobster, shrimp, swordfish, haddock, and crab cakes. And don’t forget dessert: gingerbread, Indian pudding, apple crisp, cheesecake, and of course, Boston Cream Pie. How would you like to actually see that Boston Cream Pie?? Go here: http://bit.ly/l7GjA My girls went on a trip to Boston several months ago and enjoyed their time at the Union Oyster House. The link is some of the fun things they did while in Boston.

By the way, I wonder who Tiger Woods was with? Do we want to know? Didn’t think so…

2 Responses to What Did Daniel Webster Eat?